The dollar has generally held its strength this week against most major currencies but sustained losses against various minor and emerging currencies. Exness Education’s weekly dollar roundup looks at some of the factors behind this today.

The backdrop to this week’s events is the move on Wednesday night by Democrats in the House of Representatives to go ahead with impeaching President Trump. While it’s very likely that the Republican-dominated Senate will not permit the president’s removal, events in Washington DC have demonstrated  for many traders the extent of partisanship and instability in the US government.

Data from the USA this week has generally been somewhat weaker. Although industrial production on Tuesday beat expectations, Thursday’s Philly Fed manufacturing index was much worse than expected at only 0.3 (November’s result was 10.4). The third quarter’s current account deficit decreased very slightly but the previous release was revised downward to negative $125.2 billion. 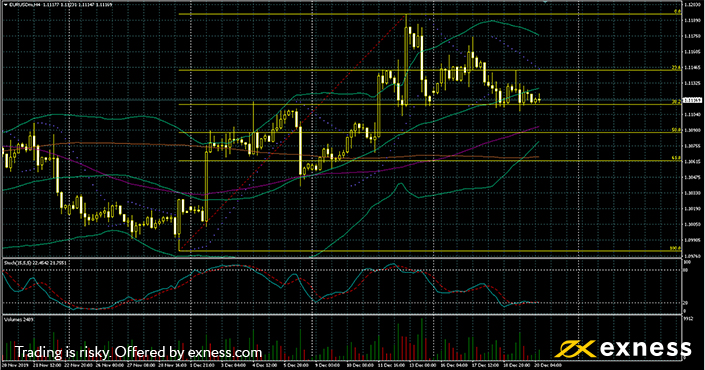 Euro-dollar has been fairly insipid in the second half of the week, consolidating above the important area of $1.11. Wednesday’s attempt to push lower was rejected around the 50 SMA (from Bands), the same area of the 38.2% Fibonacci retracement.

We can still see growing distance between the 100 and 200 SMAs in the aftermath of two golden crosses at early last week and on Monday afternoon GMT. However, there is no indication of buying saturation on this timeframe; indeed, the slow stochastic (15, 5, 5) at 21.35 remains very close to the oversold zone.

The decrease in volume on the whole this week seems to support the overall picture of consolidation. It’s likely that many traders will await significant economic data in the new year before buying in here. 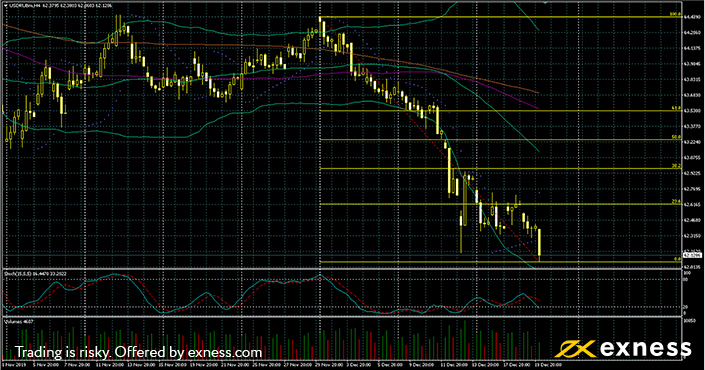 With some of the greenback’s worst weekly losses in years in this pair, the dollar sharply declined this week against the ruble. In this case oil has been one of the key drivers: crude has continued to make strong, sustained gains this week as the expectation holds for OPEC and Russia to cut more production in the new year. Oil is a crucial export commodity for Russia, so one would expect to see more gains for the ruble if Brent crude challenges $70 a barrel in January.

The technical picture for this symbol is a bit less clear, though, with volatility this week having been extremely high. We can see a number of notably divergent openings since Monday leading to the large drop in the current period. The challenge to the downside here is the important psychological area around ₽62. If this is broken, it’s possible that dollar-ruble could test 18-month lows around ₽61.

However, traders who wish to sell from this area need to monitor Bollinger Bands and oscillators carefully for oversold conditions. Today’s significant losses and the slow stochastic clearly within oversold mean that this is probably not a good place to enter. Symbols such as USD–RUB with relatively lower volumes of trading also tend to be very unpredictable over Christmas and New Year. 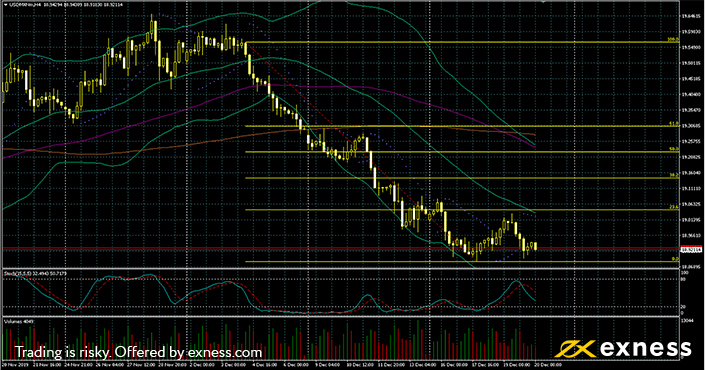 USD–MXN has mirrored the movements of USD–RUB in December so far, although one can concede that the movements have been much less dramatic. The peso is also correlated fairly strongly with crude oil, so the fundamental drivers here are quite similar to those of the ruble.

The key difference though is the Banco de Mexico (BdeM)’s decision yesterday night to cut its benchmark rate again by 0.25% to 7.25% (Russia’s central bank did the same but on the 13th of December). Demand for the peso in the carry trade isn’t likely to cool off anytime soon considering what most other central banks are up to, but a loss of momentum in the short term is fairly likely as traders consider whether Mexico’s economy might enter an extended period of cooling off as some senior members of the BdeM fear.

Yesterday’s attempt to retrace above 23.6% Fibo was rejected quite convincingly: we can see a downward candle with a large body following the gravestone doji. A double death cross of the 50 and 100 SMAs below the 200 last night plus the relatively large distance of the stochastic from oversold currently suggest that more losses are likely here. As elsewhere, though, volatility is expected to be high over the festive period.

Exness wishes you all the very best for a great holiday season. Join us again in 2020 at education.exness.com as we continue to analyse the most important CFD instruments!