The dollar has made losses this week against all major currencies with the exception of the yen. The return of risk-on mood and gains for oil have driven AUDUSD up and USDCAD down in particular. This weekly dollar roundup takes a closer look at the four-hour charts of these; thank you very much Peter Gakuo and EdiSon Miranda Monzón for requesting these symbols!

This week’s losses by the greenback come against the backdrop of general weakness over the last few months. There are several important reasons for this:

Over the past full year, the Fed has gone from one of the tightest monetary policies in major advanced economies to one of the loosest. Unlimited quantitative easing, a funds rate in the current range of 0-0.25% and the abandonment of a clear target for inflation strongly discourage American investors from holding cash savings.

Shares’ very strong recovery in Q2 and Q3 are another factor in the replacement of ‘cash is king’ during the crisis with the current narrative ‘cash is trash’. Despite a number of major shares – both cyclical and defensive – paying minimal dividends and diverging sharply from the outlook for the real economy, money has poured into American and global stock markets. Many shares have reached new all-time highs over the last few months, and investors and traders continue to see shares as much better options than cash due to high appreciation.

The dollar had generally been seen as overvalued relative to most other major currencies by various participants in forex markets for some years. The speed of the Fed’s tightening since 2017 contributed to this, as did the dollar’s status as a semi-haven. Now that both of these have unravelled, there has been considerable room for the greenback to fall.

Political disruption and reaction to covid-19

While partisanship and deadlock in the American political system is obviously nothing new, recent divides on the Hill over fiscal stimulus have raised questions about the American government’s ability to improve its handling of the economic fallout from covid-19. The USA is the worst affected advanced country from the virus in terms of number of deaths and decline in GDP.

With the presidential election coming up in less than a month, we can probably expect these four factors to decrease in relative importance. However, traders should not ignore monetary policy and data during this period. Having established some of the fundamental reasons for the dollar’s recent losses, let’s now turn to charts and see how TA and fundamentals have been interacting. 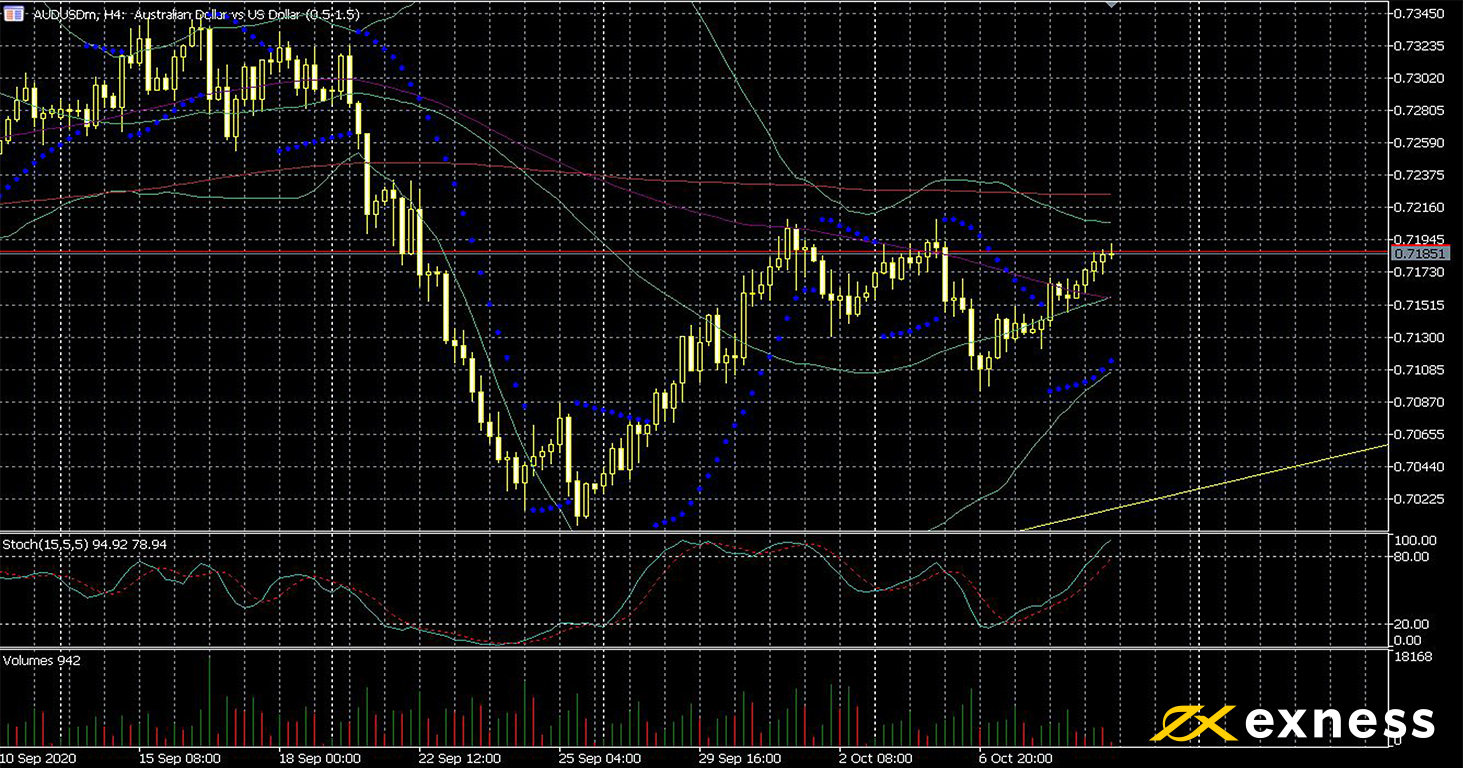 September’s pullback by the Aussie dollar correlates fairly closely with the retreat of the S&P 500 over the same period. AUDUSD is now consolidating not far below the 13-month high of 74 US cents. The main resistance in the short term is the 200 SMA around 72.2c; this area is likely to be tested over the next few days as the 50 SMA from Bands completes a golden cross of the 100.

Price has moved back into overbought today based on the slow stochastic (15, 5, 5) at about 95, very close to the maximum possible reading. Bollinger Bands (50, 0, 2) though don’t yet signal overbought. While volume this week has been close to the average in September, buying volume has generally dominated.

Regular data are likely to have less of an impact on AUDUSD over the next two days of trading. However, Tuesday’s inflation releases from the USA are set to drive movement on this chart. The opposite reaction to before the crisis, i.e. losses by the US dollar if the releases are higher than expected, is possible given the Fed’s scrapping of clear targets for inflation. At any rate, traders should be prepared for volatility on Tuesday afternoon GMT and possibly consider postponing any new trades until after the releases. 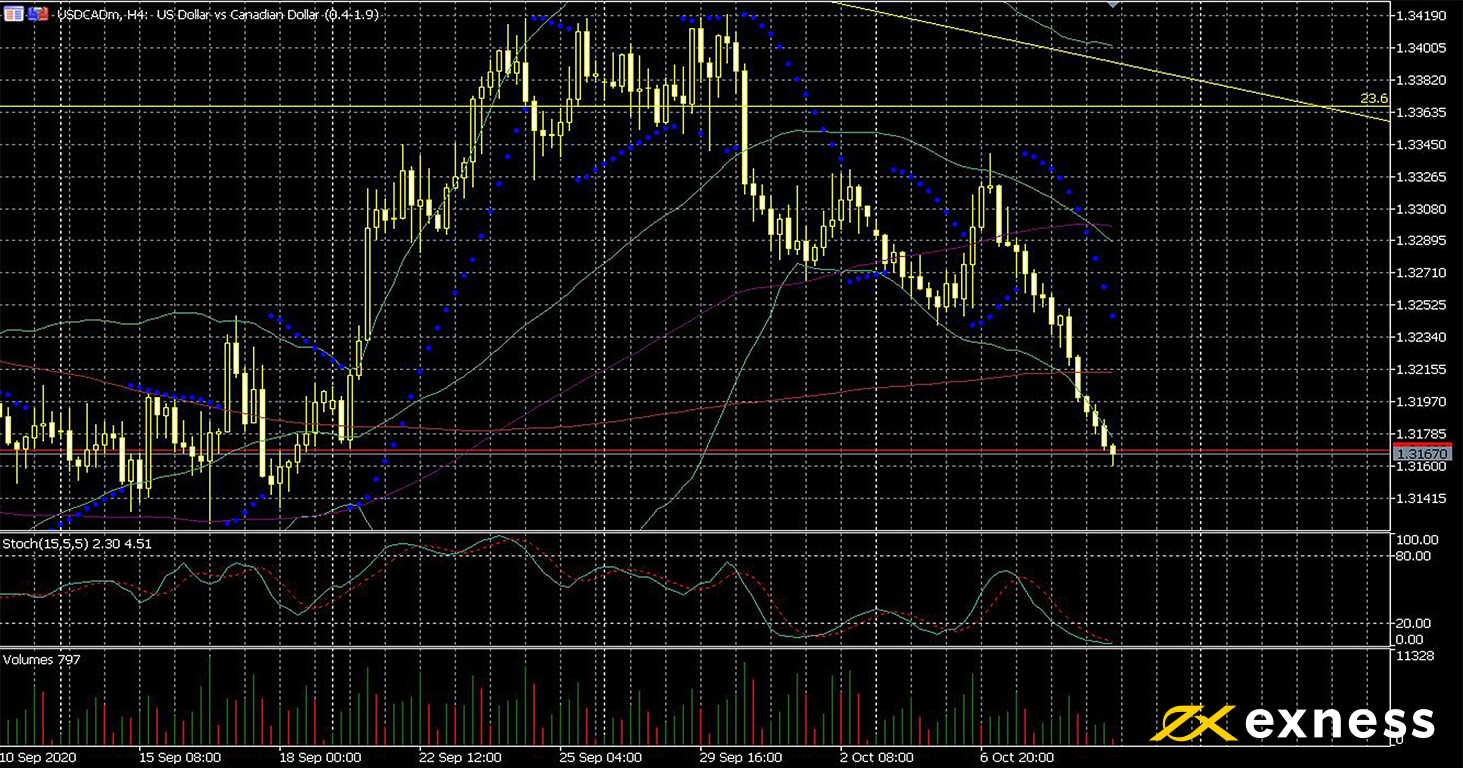 The greenback’s losses against the loonie have been much stronger this week, with freefall continuing since the wee hours of Wednesday. The unique correlation of this among major pairs with the US dollar is that of the Canadian dollar with oil. Brent has had a bumper week, moving up more than 10% to trade at $43.14 at the time of writing.

The most obvious target for bears here is the key psychological area of C$1.30, the starting point of panic-fuelled gains in late February and the initial endpoint of the downward reaction at the very end of August. Again here moving averages are in the process of flipping, with the 50 SMA from Bands having recently completed a death cross of the 100 and price having moved past the 200 SMA as well.

Both the slow stochastic and Bollinger Bands print a clear oversold signal. The former at 2 is extremely close to the minimum possible reading. Volume meanwhile has dropped off in the second half of the week.

The strong push lower this week combined with the high importance of this afternoon’s Canadian data make it a big risk to sell in here. While Canadian employment change is expected to be somewhat weaker at about 157,000, the rate of unemployment is set to decline below 10% according to the consensus. The reaction to these releases is crucially important: depending on sentiment, we might see a temporary pause on the chart or a bounce for the greenback.

While the Aussie dollar could move on Chinese trade data in the wee hours of Tuesday 13 October, the first key releases for both AUDUSD and USDCAD next week are American inflation and core inflation, both at 12.30 GMT on Tuesday.

As noted above, a slight increase in the non-core figure as expected might be negative for the greenback given the Fed’s recent changes to monetary policy. Regardless the result, traders should be prepared for instability around the releases and possibly avoid any new orders until the dust settles.

Based on both TA and the current fundamental background, the US dollar looks likely to make more losses against most currencies into next week. Aside from a dramatic change in sentiment in stock markets, all of the factors are there for the dollar to lose strength in the absence of demand. Short-term opportunities are likely to remain in both directions while the key question for medium-term sellers of USD is identifying entries. These might occur around data-driven consolidations next week.

Many thanks again to EdiSon Miranda Monzón and Peter Gakuo for requesting these two symbols, AUDUSD and USDCAD. If you have a similar request for an article, please tell us in a comment on Facebook: we’ll then cover the symbol(s) you want as soon as possible.