This morning’s release of Chinese inflation for July came in at 2.7%, slightly above expectations and giving various markets a boost so far today. PPI in China also dropped marginally less than expected, minus 2.4% versus the consensus of minus 2.5%. Increasing demand for Chinese goods around the world seems to be a good sign for the ongoing economic recovery in many countries. This preview of weekly forex data looks at data and charts for GBPNZD, EURAUD, MXNJPY and USDRUB.

Gold has remained flat this morning after retracing downward about 2% on Friday night. Brent meanwhile made some gains this morning, breaking through $45 again as sentiment improves. Friday’s NFP came in at 1.76 million, beating expectations of 1.6 million fairly well and giving the dollar some fundamental support in the aftermath.

Central banks didn’t announce any major changes last week although the Bank of England did rule out negative rates in the future. This week’s key event here is the meeting of the Reserve Bank of New Zealand on Wednesday morning.

The critical regular release this week is tomorrow’s claimant count change from the UK around which the pound is likely to be unstable. Other important releases include German ZEW economic sentiment, Russian and EU GDP growth, Australian consumer confidence, British balance of trade and American inflation. It’s quite a full week of data, so traders should be prepared for surprises. 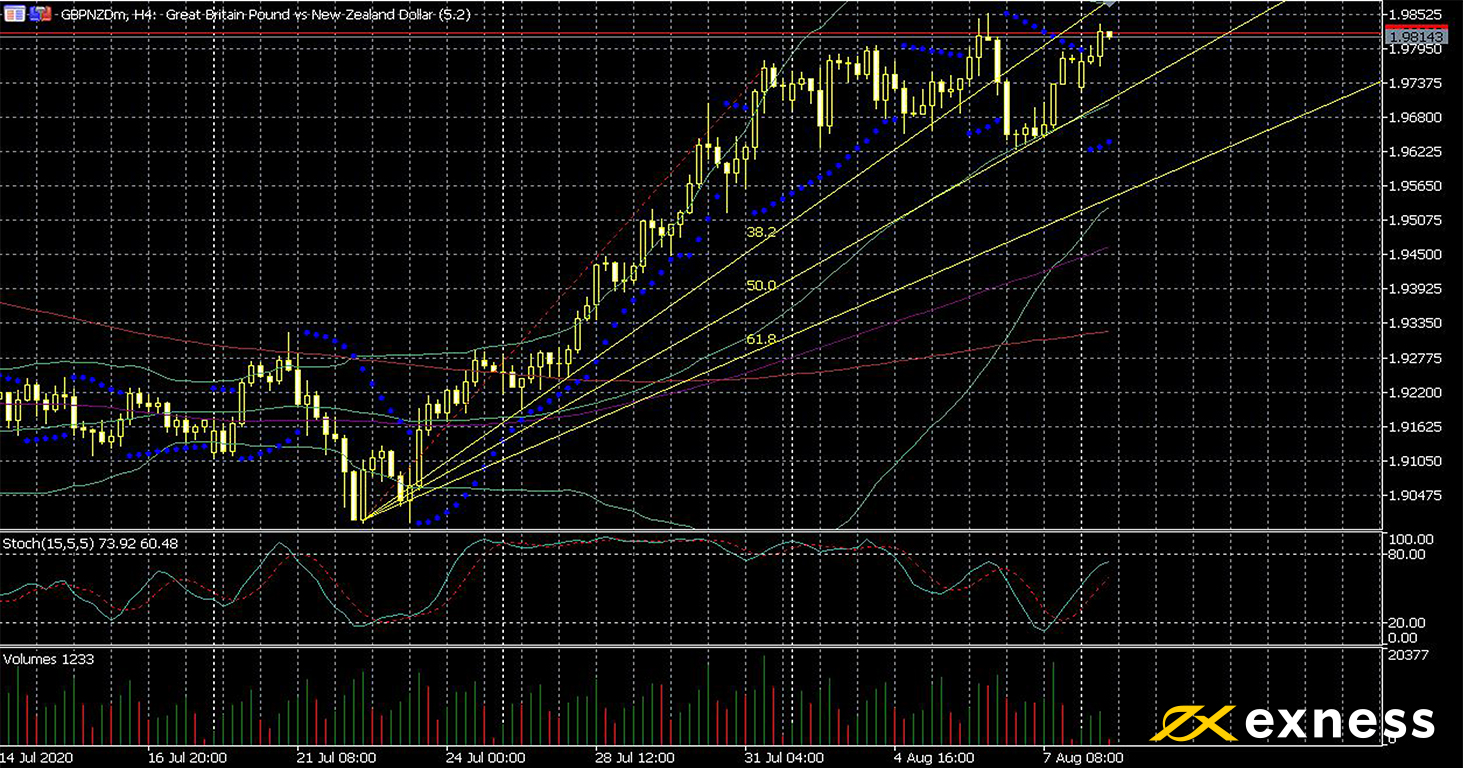 The pound has continued to perform well against most currencies including the Kiwi dollar since the end of last month. Last week’s meeting of the Bank of England’s Monetary Policy Committee was generally positive for sterling. Although the MPC highlighted that the outlook for recovery and jobs in the UK remains ‘unusually uncertain’, it also noted that the recovery so far has been ‘earlier and more rapid’ than expected in May. New Zealand is now one of only a handful of countries to have had no new cases of covid-19 for over 100 days. However, the Kiwi dollar’s traditional categorisation as a ‘risk-on’ currency has led to some headwinds over the last few weeks.

NZ$2 exactly is a crucial hurdle that’s likely to cap the upside in the short term here. With the pound now at two-month highs, a pause seems to be favourable with a possible retracement to the 61.8% area of the Fibonacci fan. The 100 SMA is also in view as a support. In the context of this week, though, technical analysis is less likely to be reliable.

Tomorrow’s centrally important claimant count change is likely to drive volatility for every pair with the pound and could go either way. Then Wednesday’s meeting of the RBNZ will affect the Kiwi dollar; the most important factor to monitor is probably comments on quantitative easing and the bank’s outlook for jobs in New Zealand in the rest of the year. 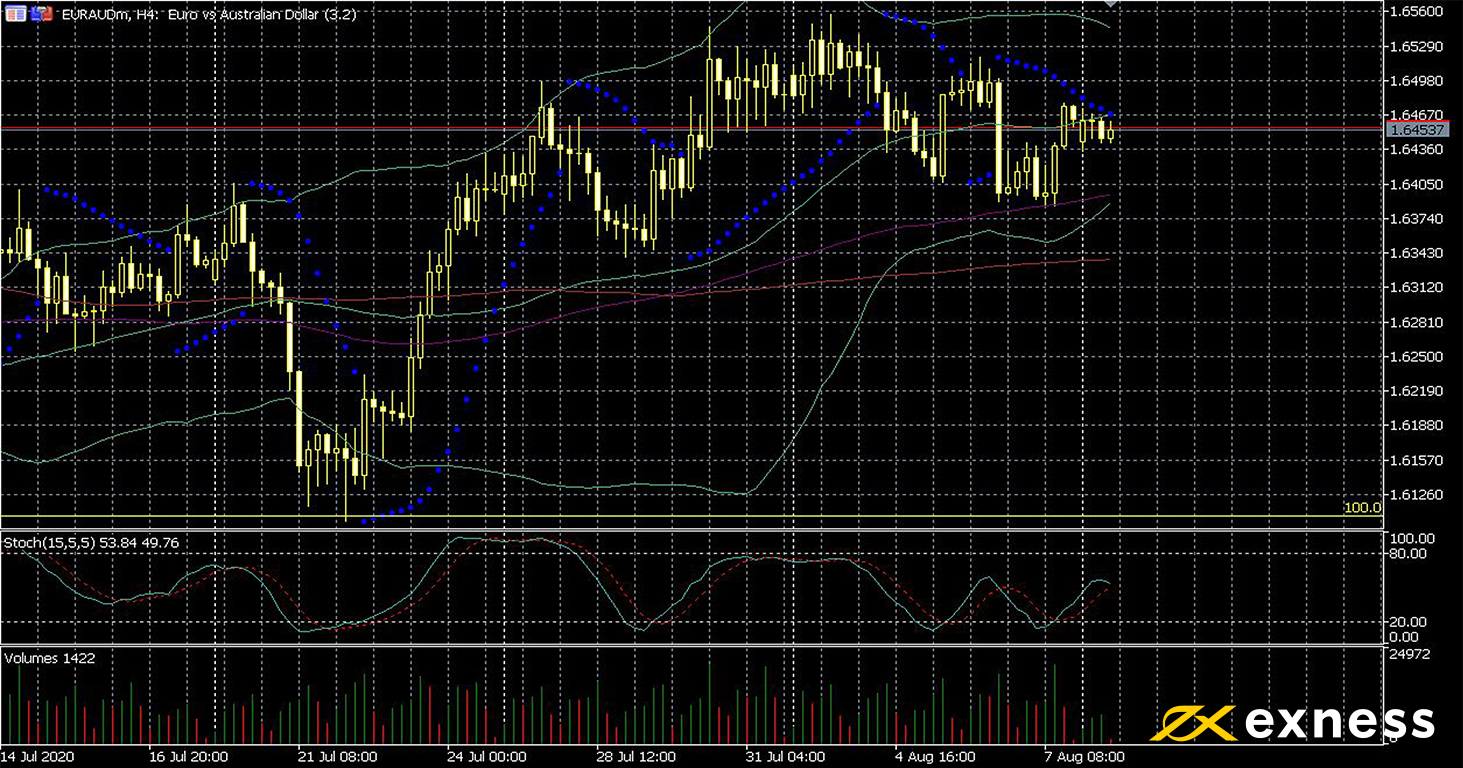 EURAUD wasn’t very active last week, remaining fairly close to areas achieved after the bounce in late July. Encouraging data from China (relatively speaking) and a good result from last week’s balance of trade from Australia have supported the Aussie dollar and prevented more losses here. However, Germany’s equivalent release at €15.6 billion on Friday was over 10 times the forecast and should boost the euro depending on the ZEW data tomorrow.

Price is now within the initial value area between the 50 and 100 SMAs where it could hold for a few more days. This would depend though on the results from this week’s important releases, notably ZEW sentiment and Australian consumer confidence. Buying volume remained fairly high last week and the slow stochastic (15, 5, 5) is close to neutral at about 54. With the 100% Fibonacci retracement area not far below, there seems to be room for the euro to make more gains here if this week’s releases are reasonably positive. 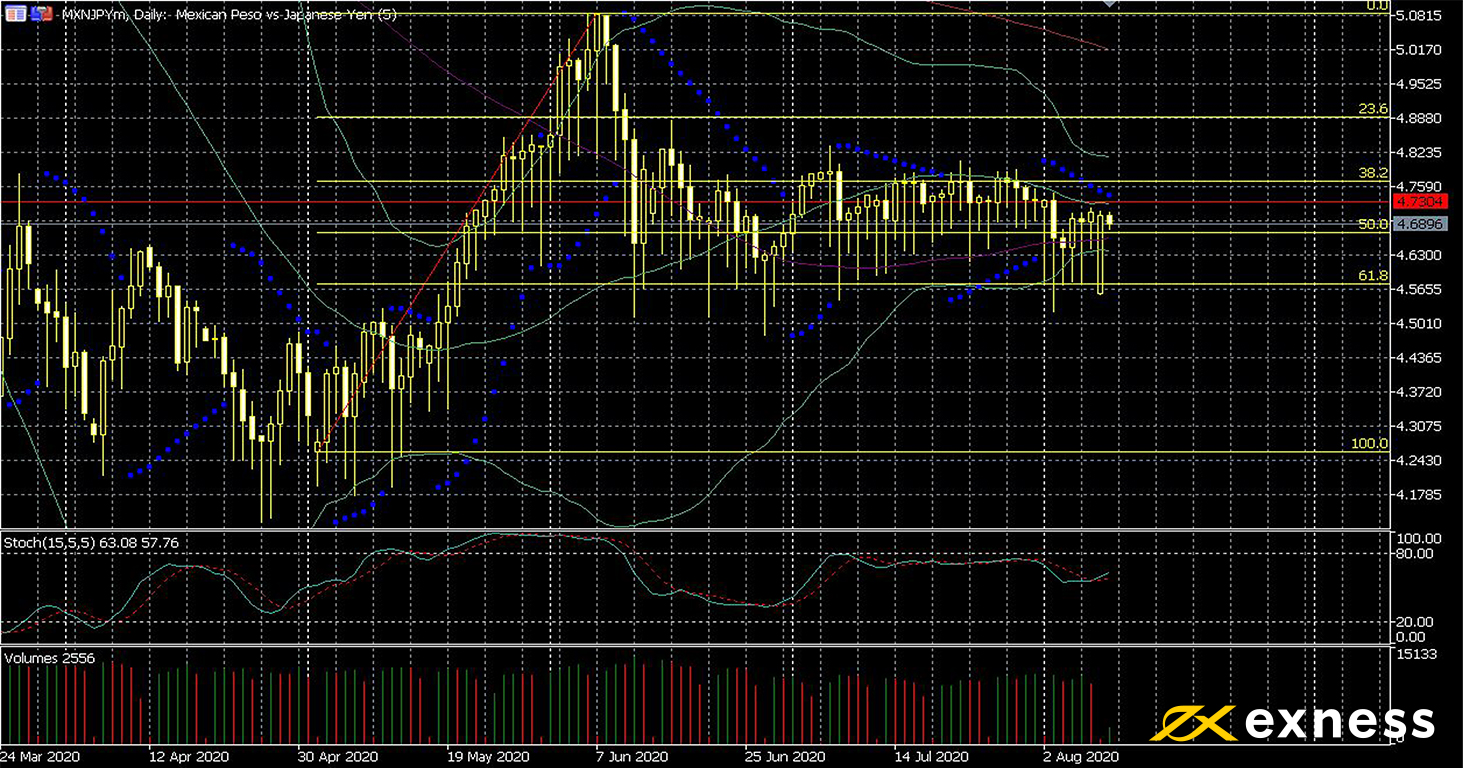 This unique pair was relatively stable in June and July as both Mexico and Japan remained among the less affected major countries from the coronavirus. After tanking in February and early March, the peso has managed to hold above ¥4 since then and briefly challenge resistance around ¥5. The lower return from carry trading the peso has made its impact felt while appetite for risk has yet to recover.

The clearest feature of indicators on this chart is the large contraction of Bollinger Bands (50, 0, 2), suggesting that a new trend might start over the next few weeks if fundamentals align. Price remains in the value area between the 50 and 100 SMAs despite the golden cross of these in late June.

The critical release for MXNJPY this week is the meeting of Banxico on Thursday night GMT. The central bank is expected to cut its benchmark rate by another half percent, which would take the rate to 4.5%. 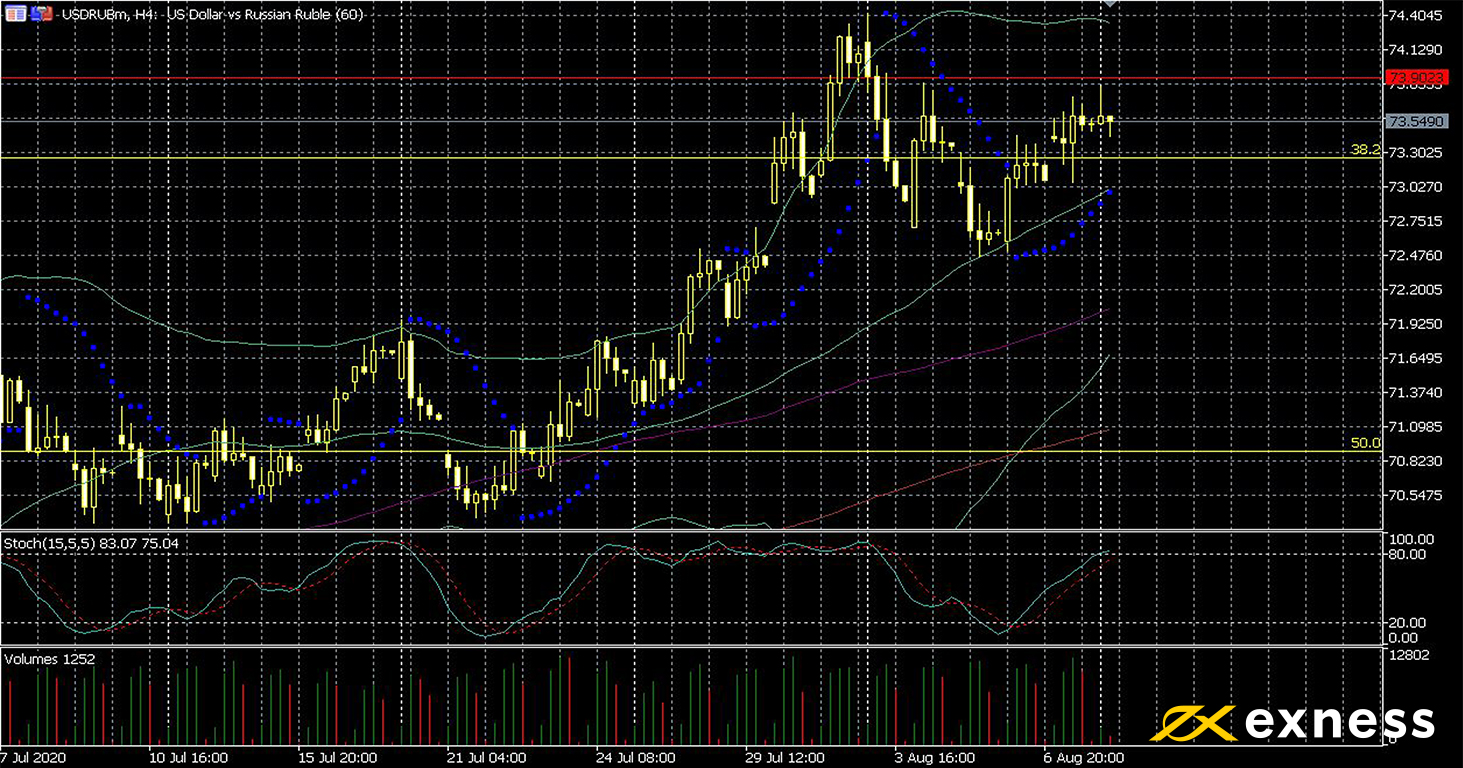 The lingering threat of fresh American sanctions on Russia has generally kept sentiment on the ruble weak over the last few weeks. Despite the spot price of oil holding fairly steady since last week, the outlook for increasing demand is balanced by a large expected increase in supply over the next few months. The CBRF’s key rate at 4.25% remains among the highest of OECD/G20 nations, though, and the central bank has signalled its unwillingness to cut rates much further.

On the technical side, ₽74 seems to be an area of resistance. Although moving averages remain positive, overbought from the slow stochastic could signal consolidation in the near future. Key economic releases this week include American inflation and Russian GDP; either of these and others such as stocks of crude oil could have a noticeable impact on the price of USDRUB.