Various European indices reached new highs this morning GMT as positivity on economic recovery remains high and the American government is expected to approve plans for new fiscal stimulus within the next few days. This preview of weekly forex data looks at EURGBP, CADJPY and UKOIL.

The only significant surprise from central banks last week was the Banco de Mexico’s loosening of policy, cutting its benchmark rate a quarter of a percent to 4%. No notable activity in monetary policy is expected this week, but most traders will be eyeing news of Congress’ passing the Democrats’ $1.9 trillion package of fiscal stimulus.

Some of the most important regular releases of data this week are annual inflation from the UK, Canada and Japan. Other key figures include tomorrow’s German sentiment and balance of trade from Japan. The only data from the USA this week of high importance are retail sales and the FOMC’s minutes, both on Wednesday. 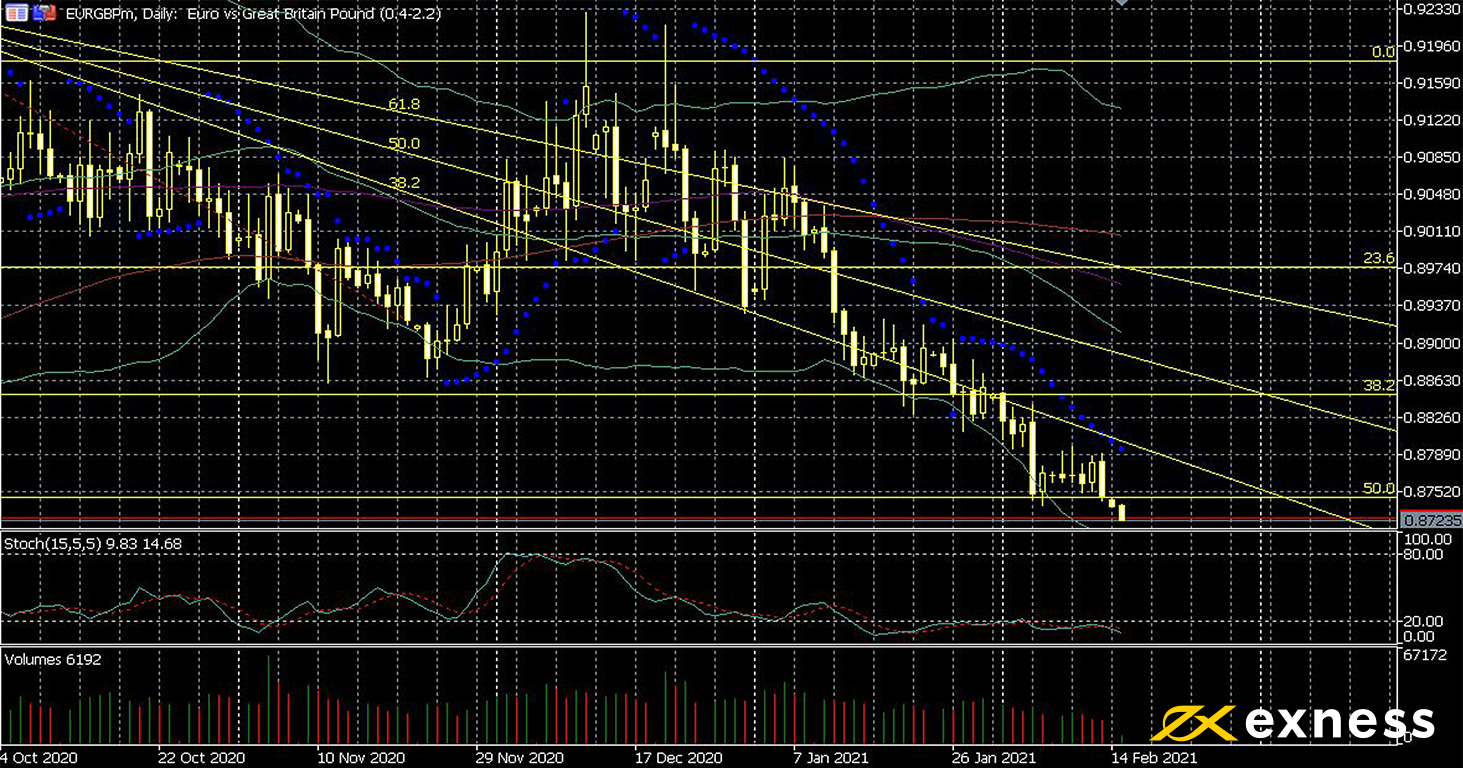 The pound has been among the best performing major currencies over the last few weeks, reaching a fresh nine-month high against the euro today and a new high of around three years against the greenback. Freight traffic across the Channel is now more than 90% of February 2020’s volume, and generally decent British GDP data last Friday considering the circumstances has boosted sentiment on sterling. Preliminary GDP growth for Q4 in the UK was 1% and, combined with an upwardly revised 16.1% for Q3, shows that a double-deep recession has been avoided.

The downtrend for EURGBP continues to be very strong from a technical perspective, with clearer spaces forming between the 50, 100 and 200 SMAs and price extending below the 38.2% area of the weekly Fibonacci fan. Oversold is an important concern for new sellers here, though, with the slow stochastic (15, 5, 5) having displayed a clear signal of selling saturation for some weeks and currently holding below 10.

This could be quite an active week for euro-pound given the importance of some of the data expected, notably tomorrow’s ZEW sentiment and Wednesday’s British inflation. An upward consolidation from the current area might provide a less risky entry to sell. 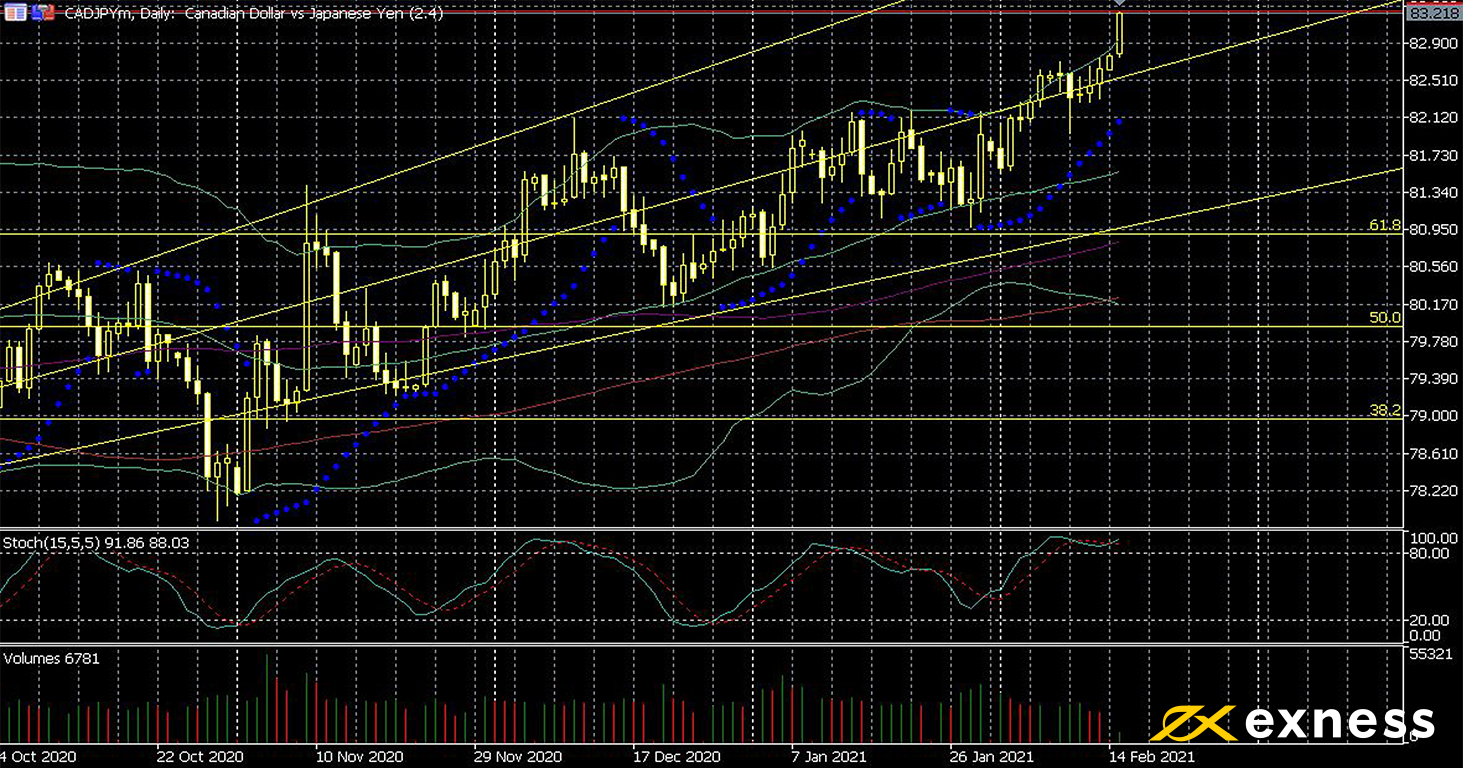 The loonie has continued to make strong gains so far in 2021 as oil has continued upward, the correlation between the two having remained strong. Recovery in trade and in China’s economy has also boosted the Canadian dollar given that Canada’s main trade partners are the USA and China and CAD is typically sensitive to disruptions.

Japanese data early this morning, preliminary Q4 GDP and industrial production, beat the consensus but remained weak. The general environment of markets at the moment remains very much ‘risk on’, a situation which usually leads to commodity currencies making gains against havens such as the yen.

The Canadian dollar’s uptrend from the point of view of TA is clear but as with euro-pound above there’s clear evidence of saturation. For CADJPY both Bollinger Bands (50, 0, 2) and the slow stochastic (15, 5, 5) show overbought, with the latter at about 92 close to the maximum reading. Surprises or changes in sentiment from this week’s key releases might provide a more advantageous point of entry for some traders. 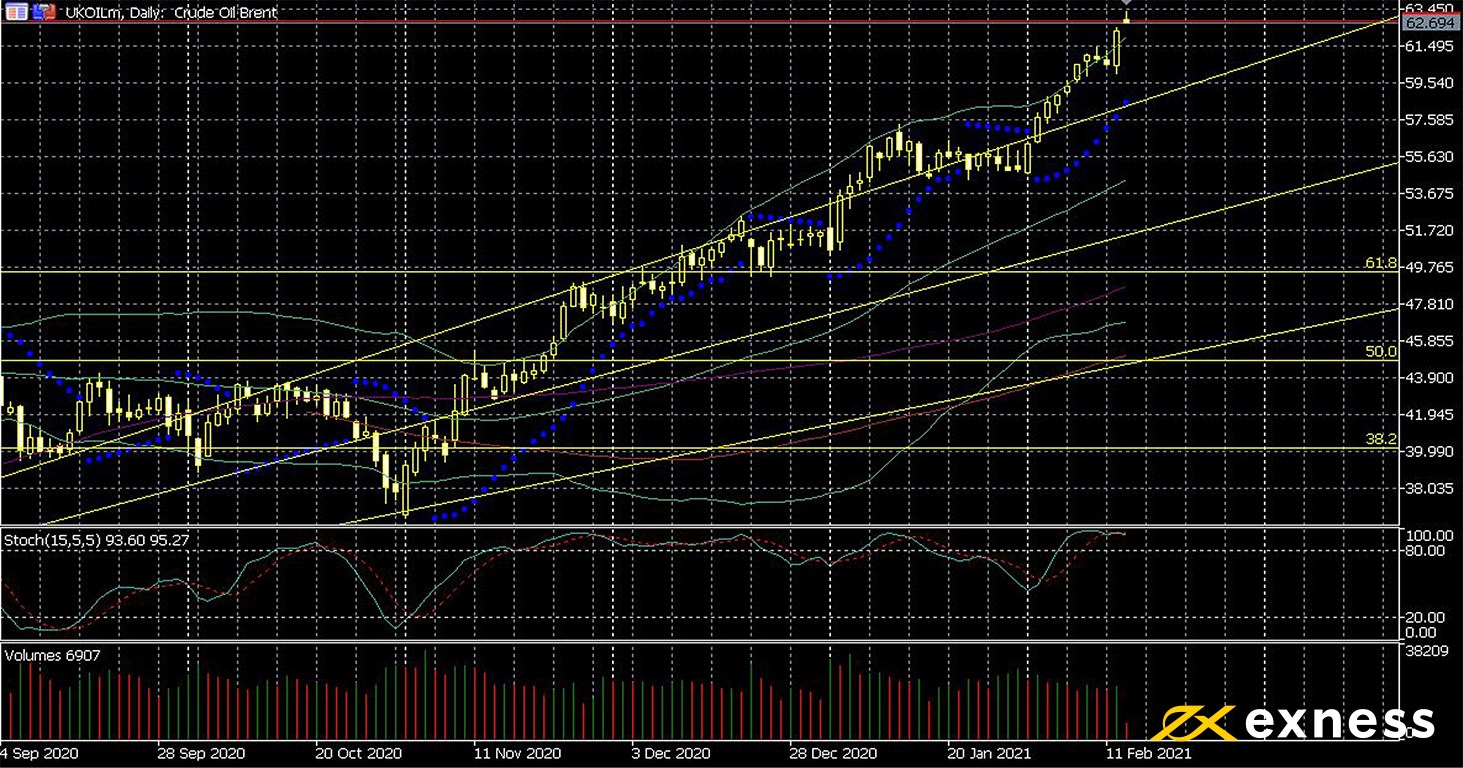 Brent opened with a gap up today and reached fresh annual highs above $63 this morning GMT. Oil has been supported so far this week by disruptions to supply in the southern US and new drone strikes on Saudi Arabia by the Houthis, while more general factors include the ongoing economic recovery and the prospect of American fiscal stimulus.

Here as elsewhere there is very obvious buying saturation with an extremely overbought slow stochastic at about 94 and today’s gap up taking price further above the upper deviation of Bands. Given that there’s no clear resistance in immediate sight, though, the catalyst for any retracement is more likely to come from sentiment or data. Stimulus is a key factor, but traders will also be watching the usual stock data and rig count this week.

Thank you for reading Exness Education’s preview of weekly forex data! Please join us again later in the week for analysis of AUDUSD and TSLA.