Various Asian and European shares had a boost this morning after China released 10-year record growth in annual retail sales and better than expected growth in industrial output. Sentiment more generally has been positive so far this week as markets continue to expect the imminent rollout of a vaccine against covid-19. This preview of weekly forex data looks at USDCAD, XAUUSD and GBPJPY.

Central banks were largely inactive last week with most continuing record low interest rates and quantitative easing. The Reserve Bank of New Zealand kept its cash rate on hold at last week’s meeting. This week’s key event in monetary policy is the meeting of the Central Bank of the Republic of Turkey on Thursday morning GMT given the recent turmoil affecting Turkey’s economy. The consensus at the time of writing is for a hike of the one-week repo rate by nearly 5%, which would take it to 15%. The South African Reserve Bank is also due to meet on Thursday afternoon GMT, although no change to the current repurchase rate of 3.5% is predicted.

This week’s most important regular releases of data are inflation from the UK, Canada and Japan. Other key data include American retail sales and Japanese balance of trade, Apart from these figures, this isn’t an especially active week for the economic calendar, so events in stock markets, changes in sentiment and of course the so-called ‘final stage’ of British-EU trade negotiations are likely to be in focus more than data. 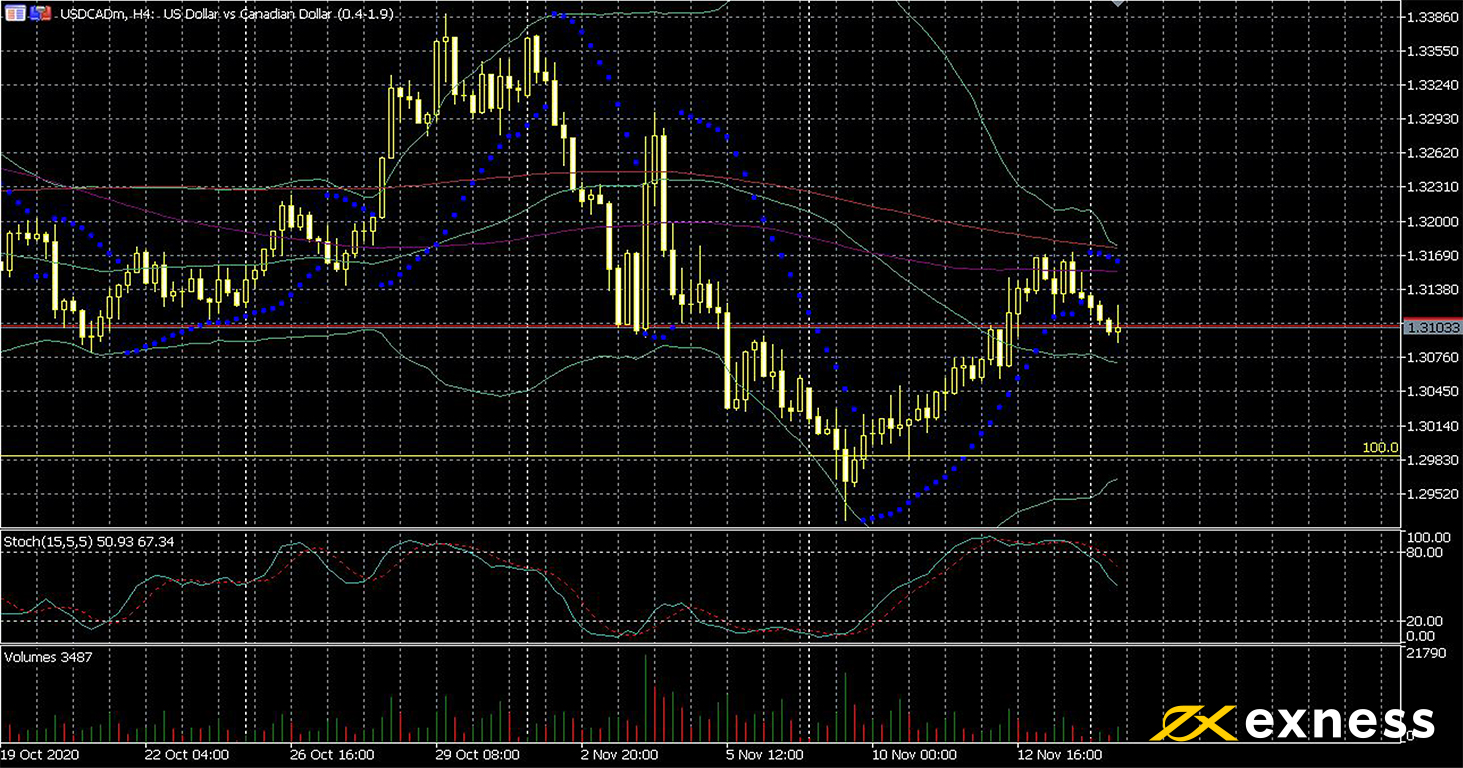 Dollar-loonie’s bounce paused this morning due in part to the latter’s correlation with crude oil. Brent has continued to move up after losses in the runup to the American elections, with the benchmark now trading around $44.35. Meanwhile the greenback has been under pressure against most currencies so far this month as Joe Biden’s win increases the likelihood of stricter measures against covid-19 in the USA and more wide-ranging support for the economy from fiscal policy. Canada, by contrast, remains one of the relatively lesser affected advanced economies in terms of cases and deaths from the virus.

From a technical point of view, a retest of the 100% weekly Fibonacci retracement area, in other words full retracement of the dollar’s gains at the end of Q1 2020, looks likely sooner or later. Although volume has remained low since the middle of last week, the slow stochastic (15, 5, 5) has now emerged from overbought and the succession of five down candles since Friday night suggests a fundamental as opposed to liquidity-based movement.

USDCAD is among the more affected symbols by this week’s data, so we can probably expect higher volatility and volume around tomorrow’s American retail sales and of course Canadian inflation on Wednesday afternoon GMT. However, the potential for these releases to halt the downtrend is quite low unless the results are notably surprising. 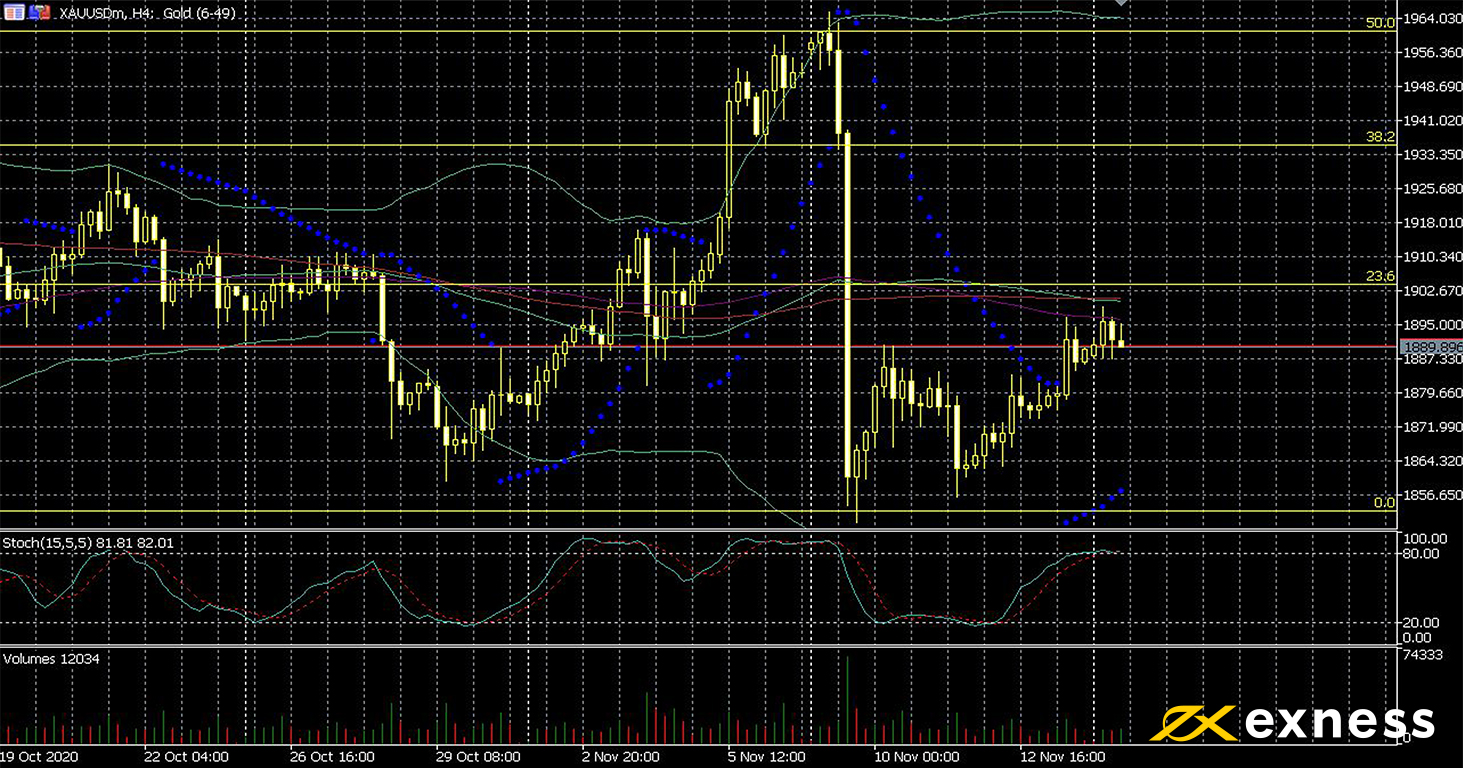 Gold’s bounce from the latest low around $1,850 has been weak. Despite some very positive fundamentals like ultra-easy monetary policy and a relatively weak dollar, overall sentiment in markets has shifted fairly decisively away from ‘risk off’ since last week. Joe Biden’s election as president of the USA also provides markets with somewhat more certainty as to how tariffs and the trade relationship between China and the USA more generally might develop over the next few months, with a less adversarial tone favoured.

While $1,850 has been established as an important support for gold in the medium term, the first crucial long-term support is the 23.6% weekly Fibonacci retracement area around $1,831 (slightly below the bottom of the chart). Indicators are somewhat mixed on this chart, with moving averages bunching very close together. Overall a period of consolidation looks likely for the next few days in the absence of an abrupt change in sentiment. 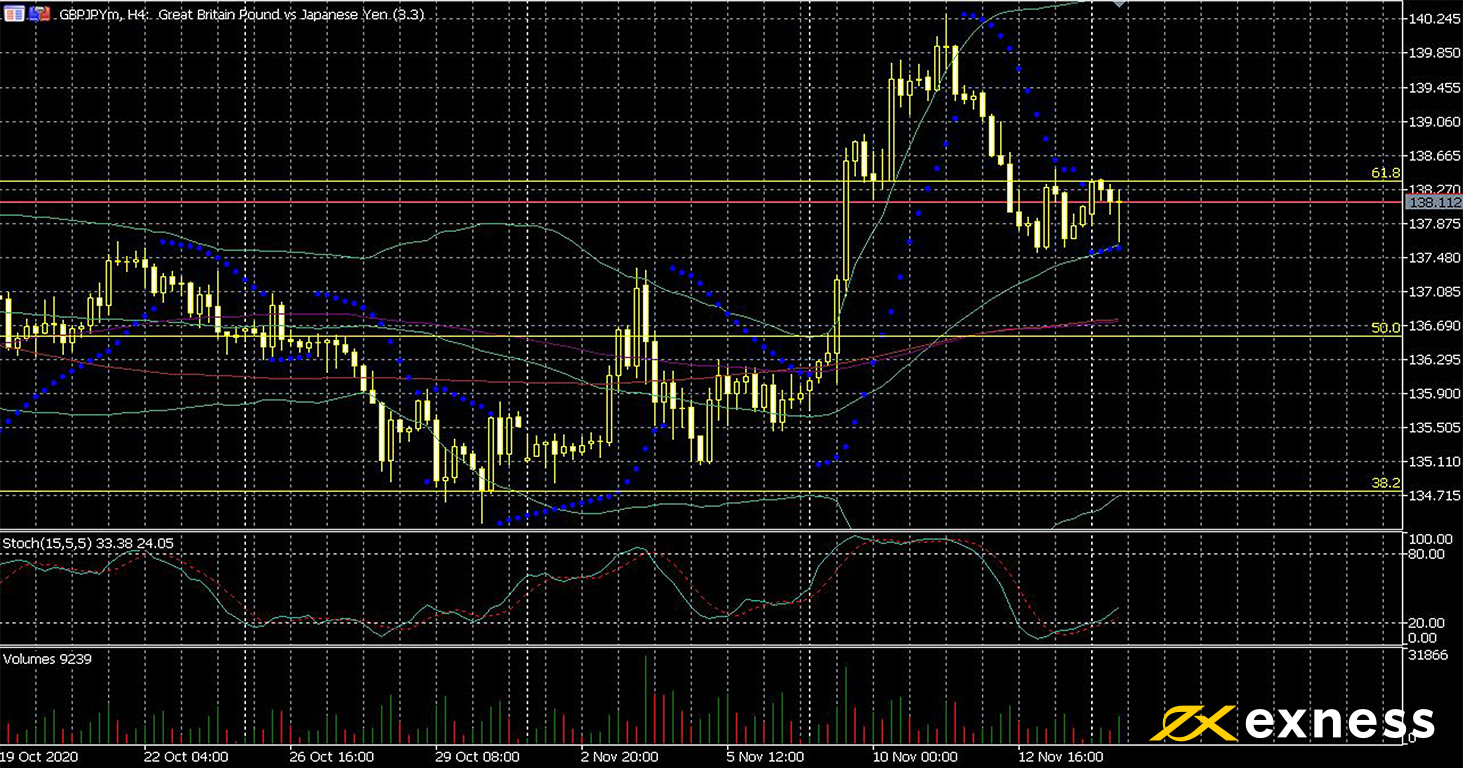 Traders much like the general public are now pretty fed up after three years of headlines to the tune of ‘crucial days for the pound ahead’, so there hasn’t been very great volatility for the pound over the last couple of weeks. Even if a trade deal is agreed this week between the UK and the EU to come into force when the transition period ends in just six weeks, it’s likely that more focussed negotiations will continue over the first few months of 2021. Meanwhile Japanese preliminary GDP releases for Q3 were notably better than expected this morning.

TA continues to suggest a buy signal overall for GBPJPY, with moving averages positive and the recent test of the 50 SMA in particular showing no signs of succeeding. Volume remains low so far today but buying is overall dominant. The slow stochastic also completed an upward crossover in oversold last week and is now close to neutral at around 44.

Both Japan and the UK release data on annual inflation for October this week and the former will also announce the result of balance of trade tomorrow night GMT. Volatility is likely around these releases even if markets discount the trade talks.

Thank you for reading Exness Education’s preview of weekly forex data! Join us again tomorrow and on Thursday for analysis of UKOIL and USDRUB. Don’t forget that you can request a symbol to be covered in insights by commenting on Facebook.