Shares around the world have made gains this morning GMT on the positive mood following the latest Chinese release of quarterly GDP growth. A gain of 4.9% in the third quarter although slightly lower than expected confirms China as the first major economy to recover from the pandemic. The key points of interest this week in markets are earnings from a number of large corporations and inflation from the UK, Canada and Japan; today’s preview of weekly forex data takes a closer look at GBPJPY, USTEC and EURCAD.

There wasn’t much action among central banks last week; no major ones have meetings this week apart from the People’s Bank of China, which is likely to leave policy unchanged after announcing a fresh injection of ¥50 billion in seven-day reverse repos this morning. The Magyar Nemzeti Bank, Central Bank of the Republic of Turkey and Bank of Israel are all expected to keep their rates on hold over the next few days.

Individual senior members of major central banks are at the International Monetary Fund’s annual meeting in Washington, DC, this week. Markets are increasingly pricing in the possibility of negative rates in more countries such as the UK over the next few months.

Inflation is the main regular release this week from the UK, Canada and Japan, but many traders will also monitor British and German Gfk consumer confidence. The relative importance of data on inflation has declined in 2020 as central banks are now much less likely to act against its rise by tightening monetary policy. That said, surprising results from the figures could drive movement on various charts as traders wonder how central banks could respond.

Earnings season is arguably the biggest focus of this week given the number of large companies releasing figures. These include IBM, Netflix, Tesla, Amazon, Coca-Cola, Intel and American Express. Traders should be prepared for high volatility affecting both these individual shares and some major indices like USTEC and US500. 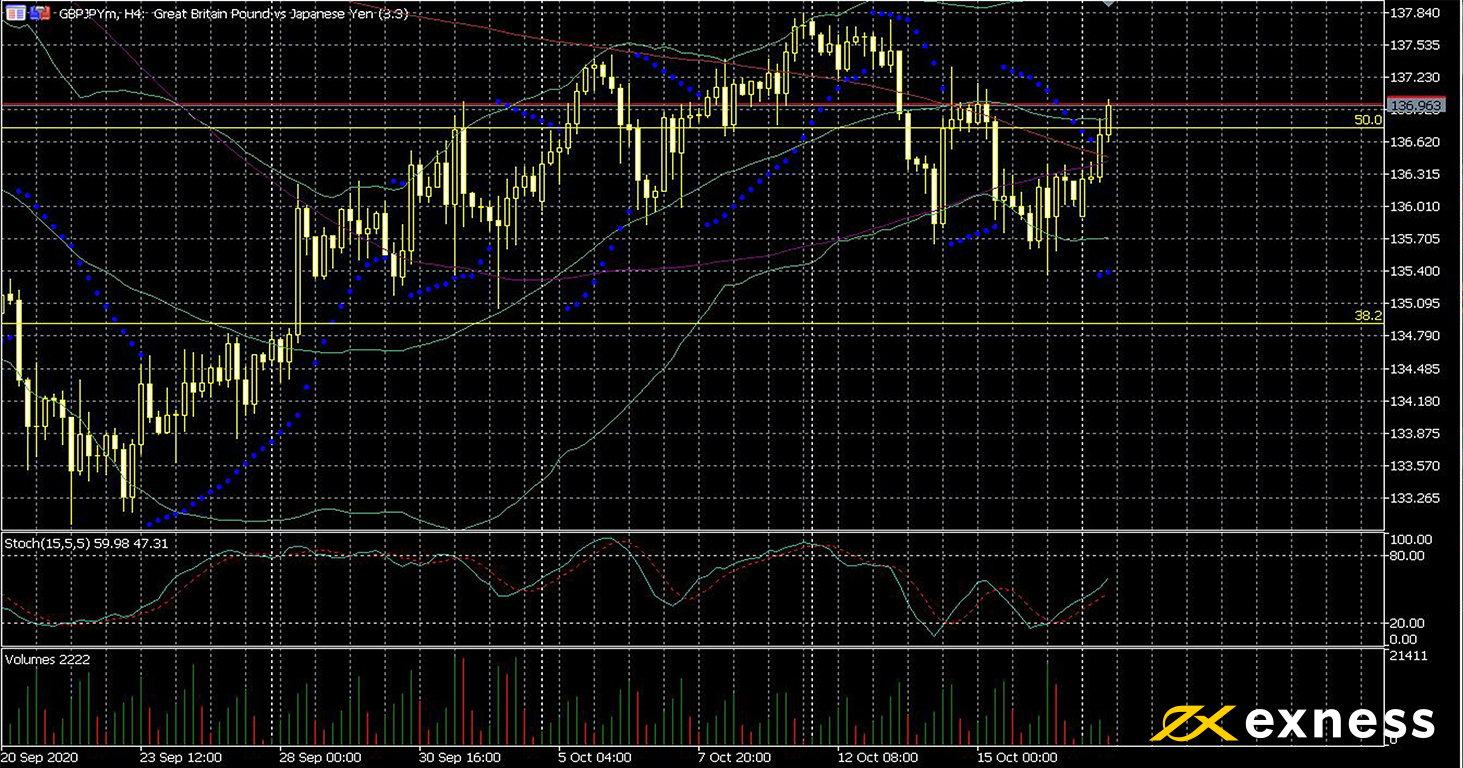 Direction for the pound based on fundamentals is now less clear than it has been anytime in the last three months. Boris Johnson asserted last week that he would walk away from ongoing UK-EU talks if a deal wasn’t reached by 15 October. Failure to follow through on this threat might have been expected to trigger gains for the pound, but these have yet to appear clearly. Equally, the current wave of covid-19 hitting the UK could have triggered a new national lockdown; so far there’s no sign of this either.

Although some traders are expecting a sudden successful conclusion of the trade talks, the fact remains that the lack of a breakdown doesn’t mean anything in itself at this stage. The pound’s fairly strong gains against the yen this morning come mainly with the backdrop of the latter’s inverse correlation with the Nikkei 225. Japan’s main index reached eight-month highs this morning on the positive general mood from Chinese data.

Moving averages have bunched closer together on GBPJPY H4 and attempts to break through the 50% daily Fibonacci retracement area have failed for now. Very high buying volume late last week might suggest more gains, but the 50 SMA from Bands on the daily chart is a key resistance this week. With both countries releasing figures for annual inflation about a day apart, Wednesday and Thursday are likely to be active days for pound-yen. 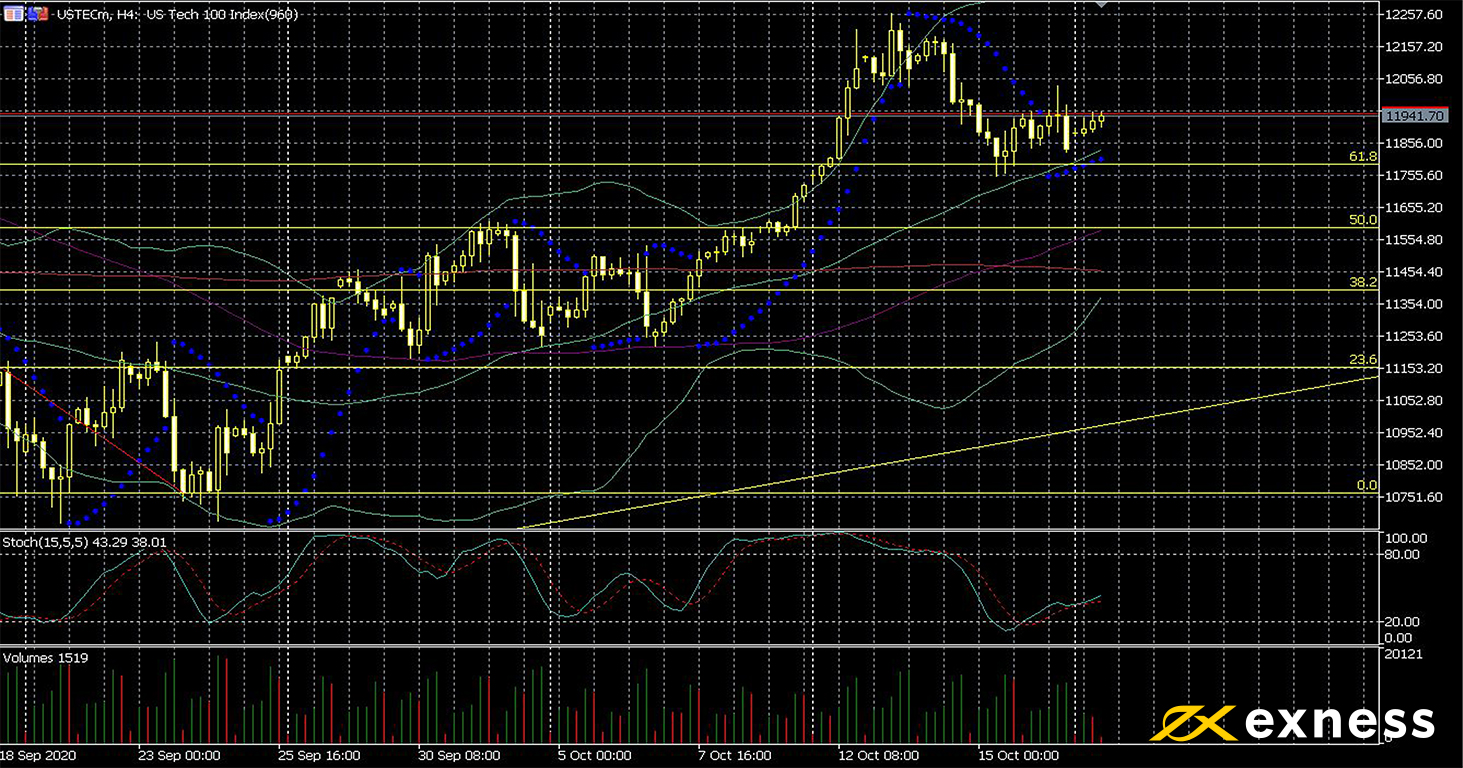 China’s recovery from the economic effects of covid-19 is a significant positive for many major corporations given the country’s key role in supply chains as well as demand for products. As before, shares are clearly in favour among retail investors given record loose monetary policy around the world.

It’s a very important week in earnings season, with a number of the world’s biggest companies by market cap releasing earnings reports. Here’s a summary of the largest ones:

Surprises in the results for these very large cap shares could bring considerable volatility to stock markets this week. Traders should monitor these releases and avoid overexposure to equity CFDs if possible.

From a technical standpoint, there seems to be considerable room for USTEC to make more gains this week. The slow stochastic (15, 5, 5) emerged from oversold only last week and there’s currently no sign of overbought from Bands either. The 100 SMA also completed a golden cross of the 200 in the second half of last week. 12,251 is the latest swing high and might be the main target in the short term, but the all-time high of 12,459 is also in view.

It’s unlikely that regular American data will have much of an impact on USTEC this week given the high importance of earnings. However, the IMF’s ongoing conference might give traders some clues as to whether monetary policy might loosen even more into the end of the year as many expect. 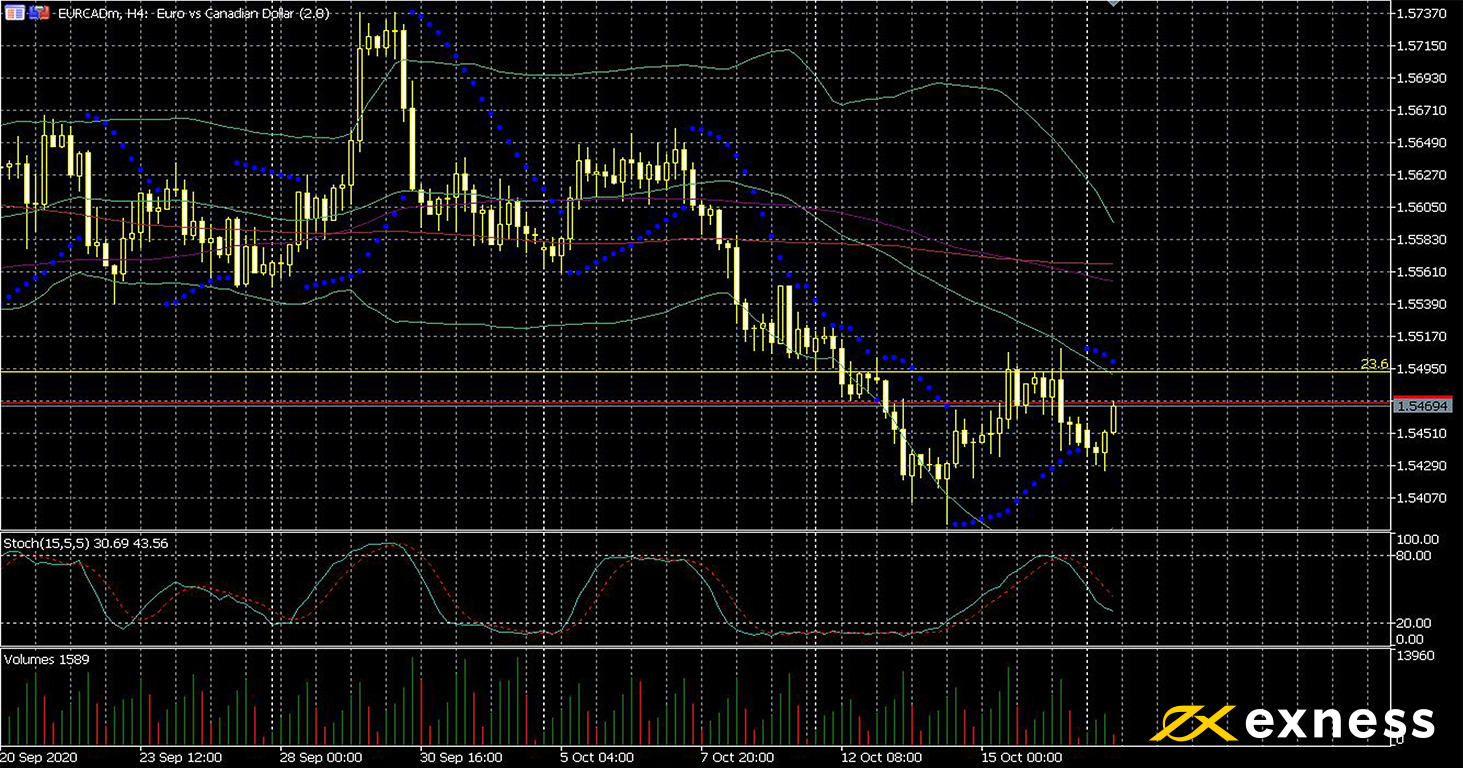 The euro remains weak against the loonie so far this week although without testing new lows yet as oil has held and new anti-covid measures are likely in much of the eurozone. The recent shrink in the eurozone’s trade surplus and expectations for further easing of monetary policy sooner rather than later have meant that the common currency has faced headwinds. Canada meanwhile remains among the relatively less affected advanced economies by covid-19.

Conversely, TA seems to indicate scope for a bounce. The slow stochastic remained strongly oversold for much of last week, and buying volume has been very high since the middle of September. The obvious initial hurdle is the confluence of the 23.6% weekly Fibonacci retracement area and the 50 SMA from Bands. A break beyond this might lead to a resumption of the earlier uptrend from Q2; however, data on inflation in Canada and sentiment in Germany this week could well alter this impression.

Thank you for reading Exness Education’s preview of weekly forex data! Join us again on Thursday for more analysis of active instruments. Don’t forget that you can request a symbol to be covered in insights by commenting on Facebook.