Stock markets are generally higher this morning after news that AstraZeneca and Oxford University’s covid vaccine is up to 90% effective. This vaccine is also significantly easier to store and administer than that of Pfizer and Moderna. Positive sentiment so far this week has also driven oil up and gold somewhat down. This preview of weekly forex data looks at USDMXN, UKOIL and EURSEK.

The main event among central banks last week was the Central Bank of the Republic of Turkey’s hike of its one-week repo rate to 15%. This came after significant changes to leadership at the central bank and Turkey’s economic ministry. The only notable event this week in monetary policy is the meeting of the Sveriges Riksbank on Thursday morning GMT, with the Riksbank’s repo rate expected to stay at 0%.

This isn’t a particularly active week in terms of regular economic data. Wednesday afternoon will see the release of data on American durable goods and spending, while sentiment-related figures are expected from Germany on Tuesday and Thursday. The second half of the week is likely to be exceptionally active for the krona (code SEK) given the very high volume of economic data from Sweden. Apart from these, we can probably expect stock markets and general sentiment to drive many instruments. 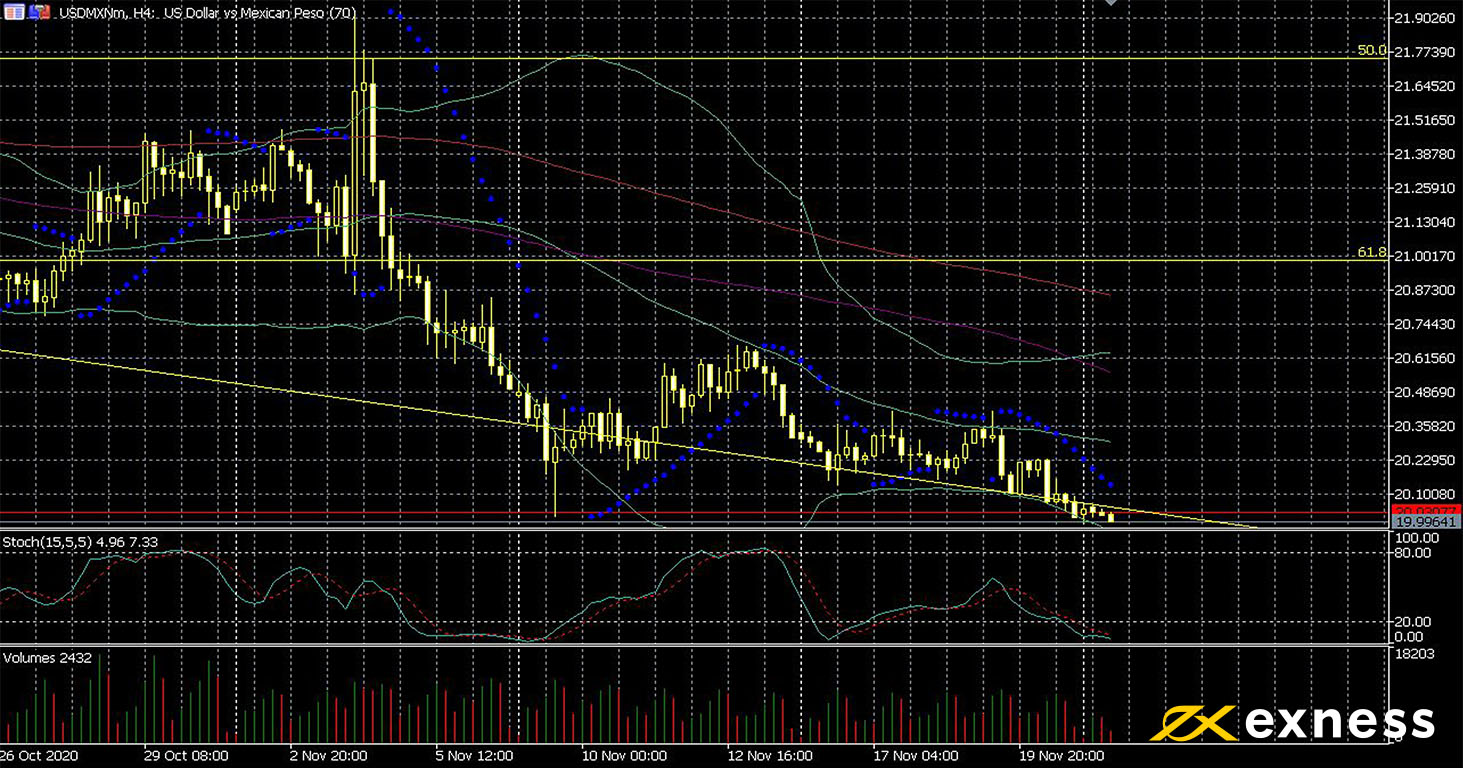 With ‘risk on’ remaining strong over the last couple of weeks, emerging currencies like the peso have generally made gains. For USDMXN in particular these have been quite pronounced given the dollar’s weakness in the aftermath of the American elections as expectations for ongoing fiscal stimulus and continuing damage from covid in the USA remain high. Fundamental support for the peso also comes from oil’s gains.

Price has regained the 61.8% area of the daily Fibonacci fan as the main medium-term downtrend has resumed since the first week of November. Momentum has understandably been somewhat weaker around the critically important psychological support at Mex$20. A clear break to the downside would signal continuation lower, but the slow stochastic (15, 5, 5) remains strongly oversold on most higher timeframes.

This week’s key releases for dollar-peso are Mexican unemployment tomorrow and final GDP growth on Thursday at noon GMT. However, the American releases on Wednesday are also likely to drive some movement for the dollar in most of its pairs. 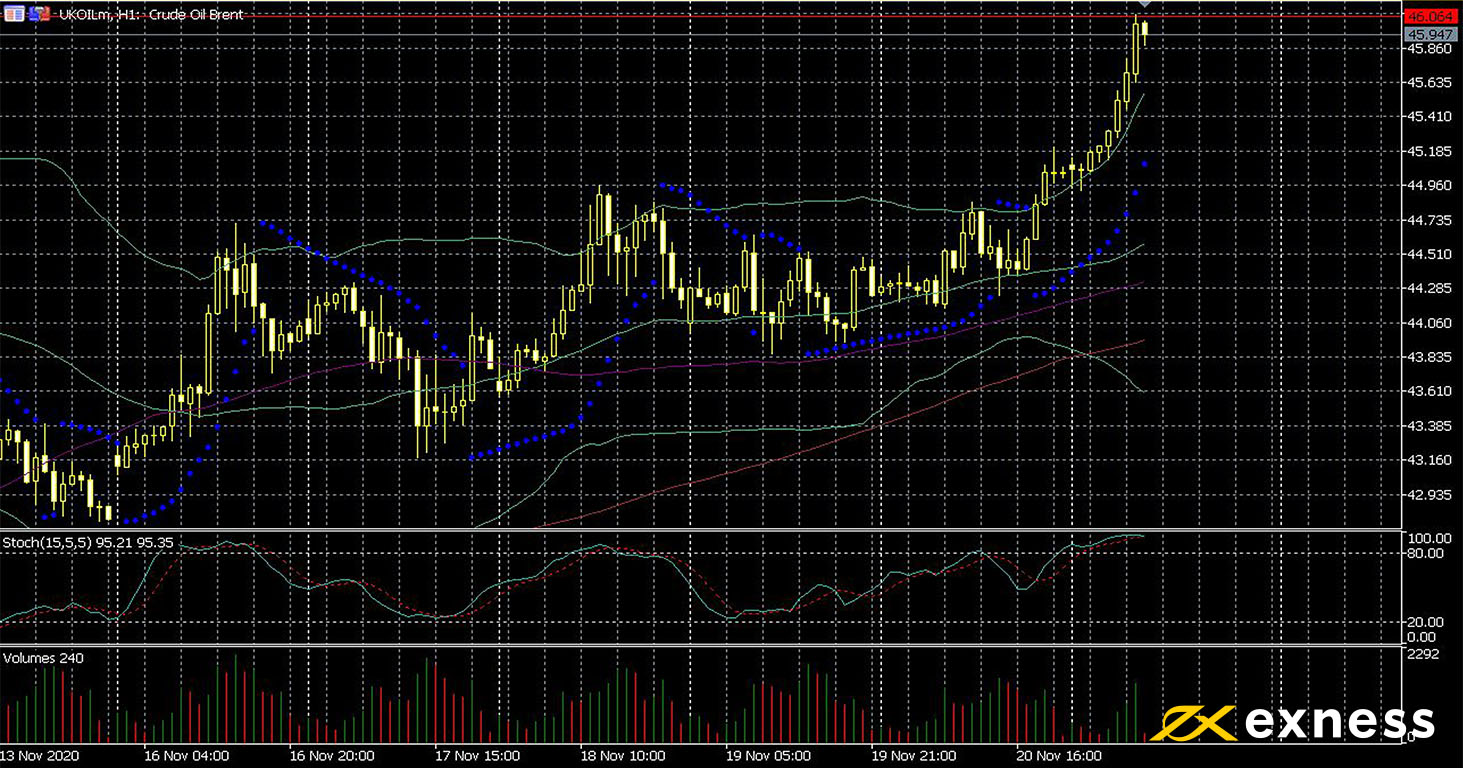 High hopes for an effective and easily deployable vaccine sometime in the first quarter of next year have driven oil sharply upward so far today, with both main benchmarks reaching three-monthshighs. OPEC+ is also likely to continue its cuts to output. Meanwhile there were unconfirmed reports this morning that Houthi rebels in Yemen struck one of Saudi Aramco’s distribution stations in Jeddah with a missile.

From a technical perspective, it appears that a consolidation has already started after the dramatic upward movement earlier in the morning. Strong overbought signals come from both Bollinger Bands (50, 0, 2) and the slow stochastic (15, 5, 5). Buying volume has been very high so far today compared with recent Monday mornings. Short-term trading might remain in focus for the next couple of days, but regular data from the API and EIA could provide more clarity for the further future while driving some short-term volatility.

Bold indicates the most important release for this symbol 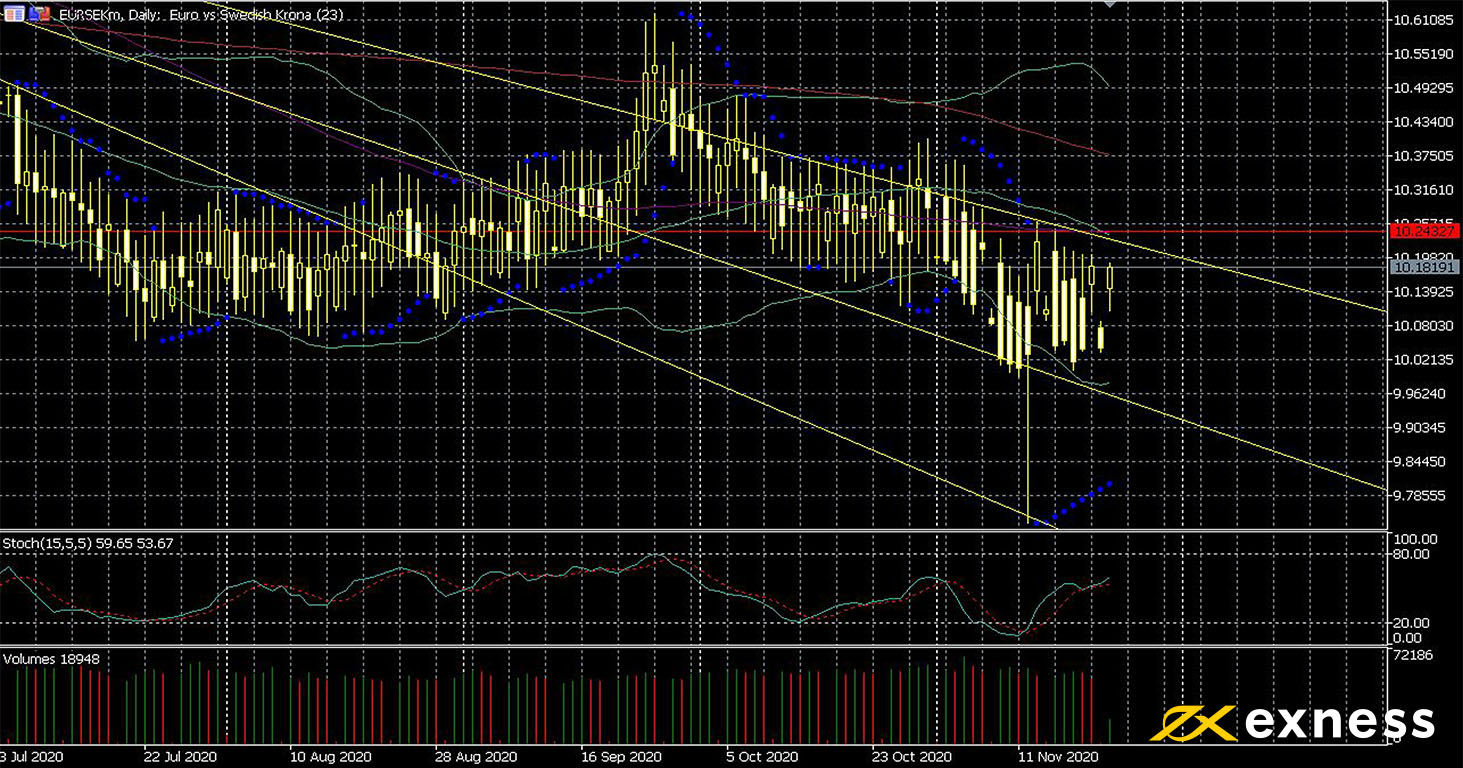 While Sweden avoided a formal lockdown, economic activity has taken a similar hit to most European countries as people have voluntarily avoided going out where possible. There has also been a significant hit to trade as demand in other countries for Swedish raw materials like timber and iron has declined significantly. The eurozone isn’t faring well either, but the krona still probably has more to gain from a successful vaccine because of Sweden’s relatively higher vulnerability to disrupted trade and business cycles.

EURSEK is fairly prominent among minor forex pairs but still intraday volatility and liquidity-based movements are common. The last few months have been no exception. However, the downtrend for the euro is clear with price inside the 61.8% area of the weekly Fibonacci fan since late September. The imminent completion of a death cross by the 50 SMA from Bands below the 100 also contributes to a negative technical picture.

Apart from the Riksbank’s meeting on Thursday at which comments on inflation and revised economic projections are likely to be in focus, important data are due from Germany on Tuesday and Thursday. Thursday morning is likely to bring high volatility for euro-krona because of the large amount of releases affecting both currencies. Instability might continue into Friday due to Sweden’s GDP data, balance of trade and retail sales that morning.

Thank you for reading Exness Education’s preview of weekly forex data! Join us again tomorrow and on Thursday for analysis of XAUUSD and EURNZD. Don’t forget that you can request a symbol to be covered in insights by commenting on Facebook.