Stock markets generally made gains in the early hours of this week’s trading. Positivity stems mainly from participants looking ahead to a vaccine being fast-tracked in the USA and other countries. Meanwhile the total deaths from covid-19 around the world passed 800,000. This preview of weekly forex data takes a closer look at EURCAD and USDCHF.

Central banks were mostly inactive last week, with even the Central Bank of the Republic of Turkey keeping its one-week repo rate on hold at 8.25%. No major central banks meet this week but the Bank of Israel and the Magyar Nemzeti Bank will announce their new rates this afternoon and tomorrow respectively.

This week’s regular data is dominated by GDP releases from various EU nations, the USA, Canada and some other smaller economies. Apart from the GDP releases, this is a fairly slow week of data, so traders can probably expect fundamentals like changes in sentiment and news from stock markets to affect forex and commodities somewhat more than usual. 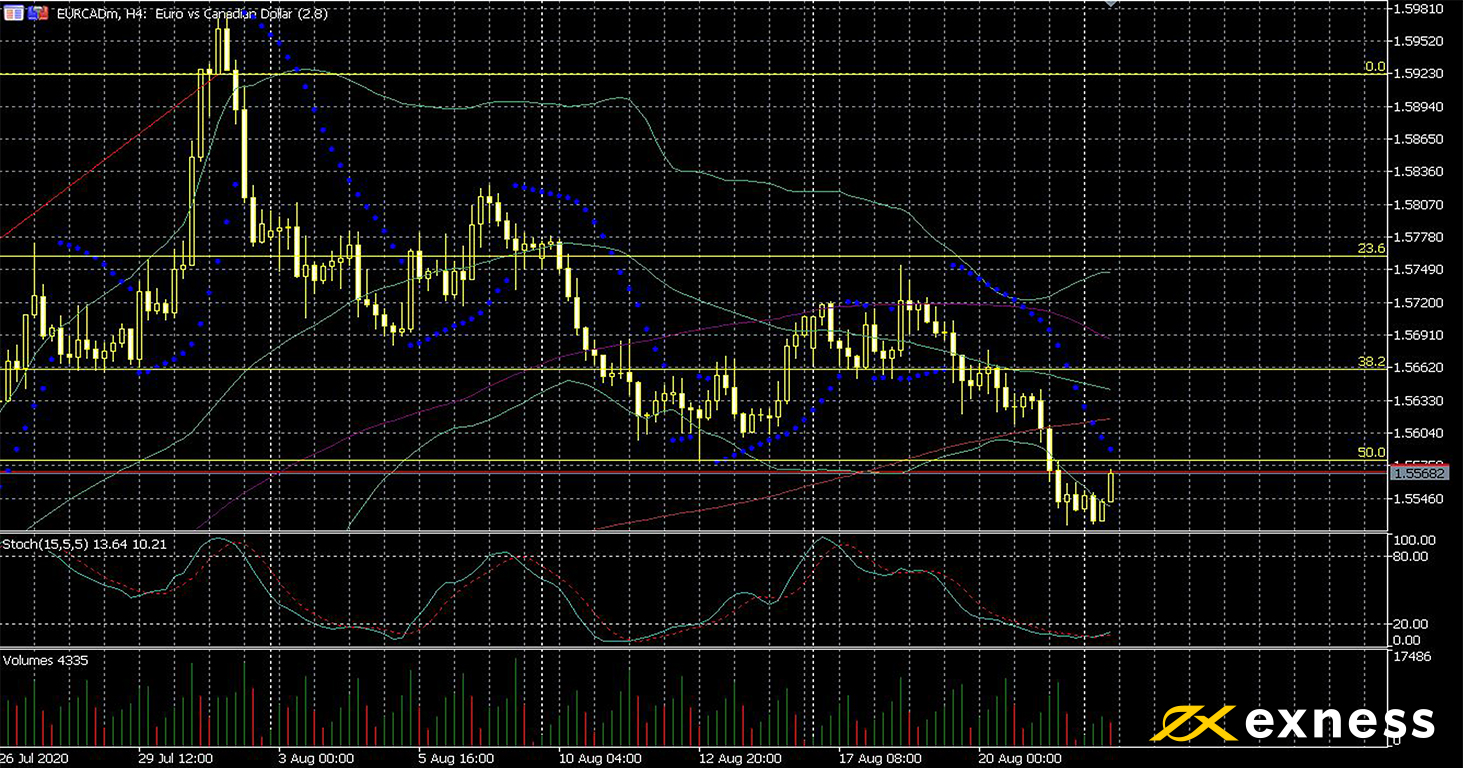 The Candian dollar has generally gained strength in most of its pairs over the last few weeks as oil held near recently achieved highs and outlooks for demand remain fairly positive considering the circumstances. Retail sales in Canada have bounced back quite well over the last two months and the return to growth in China is also a positive given the country’s place as Canada’s second largest trade partner. Sentiment on the euro in many of its pairs remains somewhat mixed given the disparate strategies throughout the EU to spur economic recovery and contain any new outbreaks of covid-19.

From the technical side of things, the short-term downtrend for the euro here is clearly still active. The death cross of the 50 and 100 SMAs late on 13 August GMT presaged another round of losses which has taken price nearly to C$1.55 earlier today. This area appears to be an important support. There has also yet to be a clear break below the 50% daily Fibonacci retracement area. This week’s crucial releases are German and Canadian GDP, but many traders will also watch equivalent data in other countries of the eurozone. 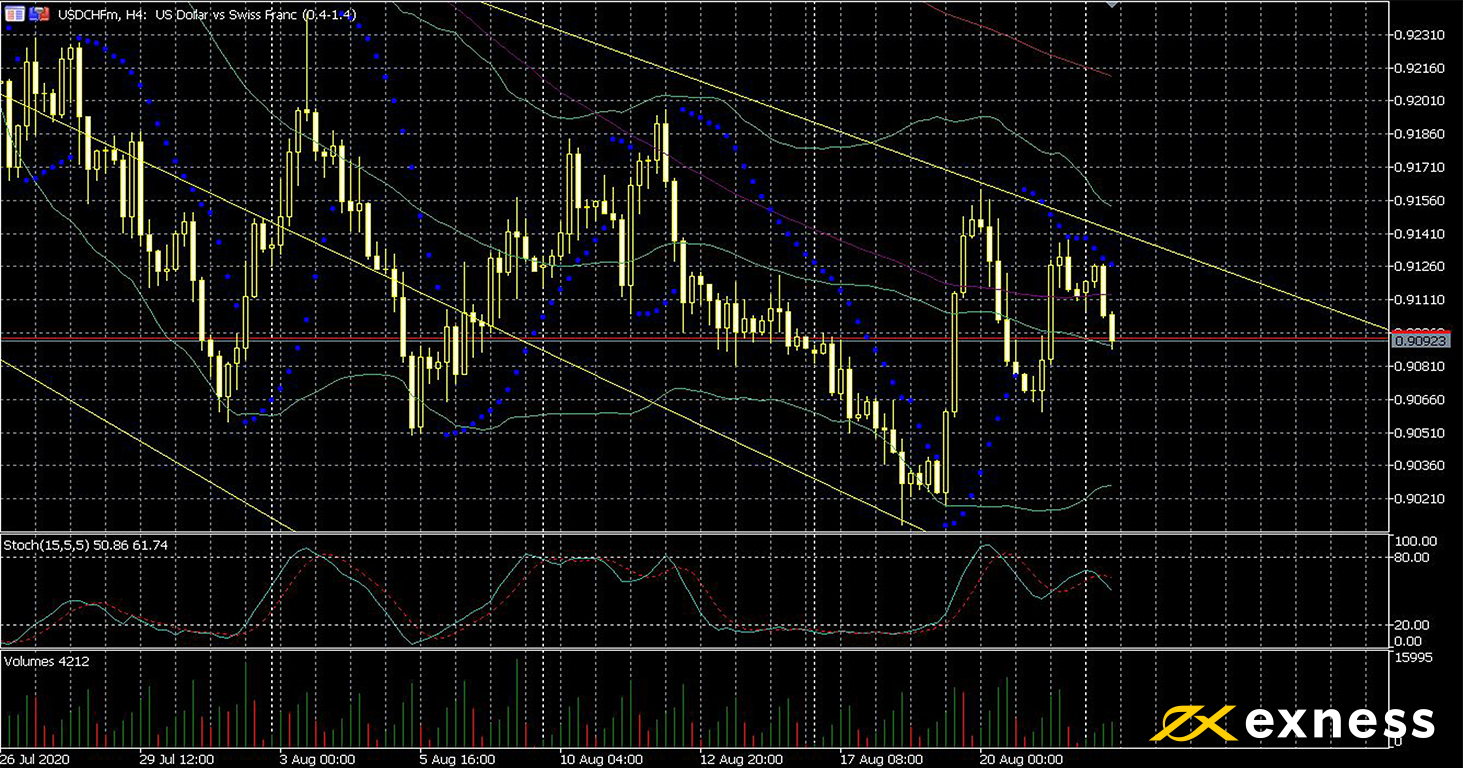 The dollar has performed rather poorly against most major currencies in August so far due to a combination of different factors. Unlimited QE and record low rates have ensured the return of ‘cash is trash’ and the dollar had widely been seen as overvalued for years compared to many other currencies. Gold’s dramatic gains over the last couple of months have also had an effect given the fairly strong inverse correlation between the yellow metal and the greenback. Despite the fact that Switzerland’s covid numbers are considered artificially low because of lack of testing, the franc’s status as a haven remains unchanged for now.

Considering TA, the latest test of the 61.8% area of the daily Fibonacci fan seems to have failed twice now since the second half of last week. Buying volume remains fairly high, but we can adumbrate that this is probably short-term traders aiming to exploit volatility, which has remained high recently. Moving averages are still negative while the slow stochastic (15, 5, 5) at 51 is almost exactly neutral.

Important releases this week include GDP as elsewhere but also Friday’s KOF leading indicators from Switzerland. Losses by shares meanwhile could drive more momentum lower for dollar-franc. Furthermore, senior members of major central banks are having their symposium in Jackson Hole on Thursday and Friday this week; some of their comments could drive volatility for the dollar.