While the focus so far this week remains on plans for new fiscal stimulus in the USA, shares in Europe mostly retreated this morning GMT amid speculation around tighter restrictions on travel. The main events in markets this week are the meeting of the Federal Open Market Committee on Wednesday night GMT plus a number of big earnings releases, so this preview of weekly forex data looks at AUDUSD, GBPNZD and USTEC.

There wasn’t much action among central banks last week, with no significant updates from the European Central Bank, and this week is likely to be similar. The Fed’s meeting on Wednesday probably won’t bring much new information to markets but any commentary on how fiscal policy might affect QE over the next few months is likely to drive some short-term volatility.

The focus of regular data this week is on tomorrow morning GMT’s claimant count change from the UK. Sentiment in Australia and New Zealand’s balance of trade are key after this, with income and spending in the USA rounding off the big releases on Friday.

Earnings season continues apace in stock markets, with a number of the largest companies in the world by market cap reporting earnings this week, including Apple, Tesla, Microsoft and Facebook. Many tech shares are likely to fluctuate more this week compared to 2021 so far. 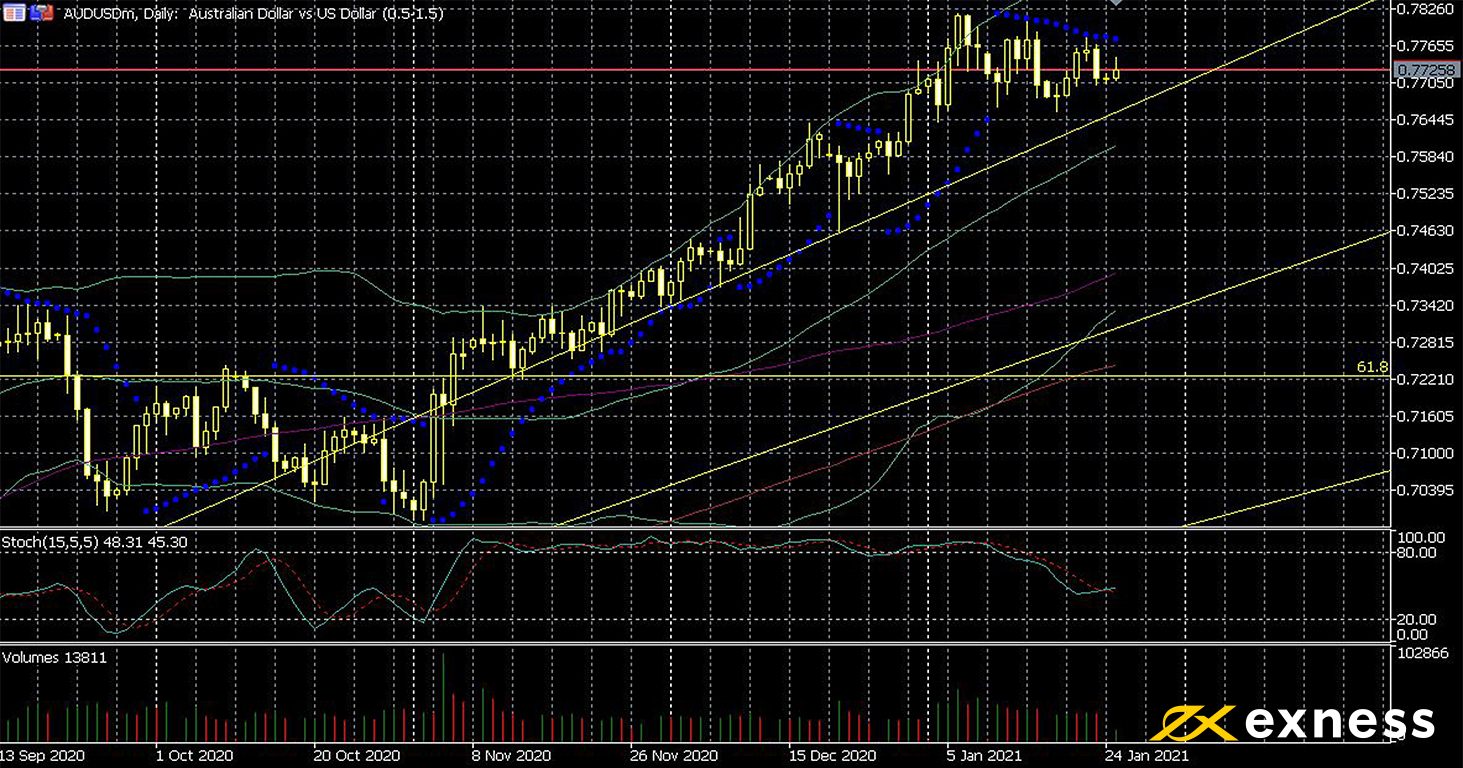 The general trend back towards ‘risk on’ has helped trade-sensitive currencies like the Aussie dollar to make gains since the end of last year combined with the US dollar’s losses in most of its pairs. Rising production inflation around the world but especially in China has been a positive factor for countries like Australia which depend on exports of commodities.

From a technical point of view, the time appears to have come for another leg up by AUD. The consolidation for the past two weeks has taken price out of overbought and brought it close to the 38.2% area of the weekly Fibonacci fan. Volume remains relatively low, though, so waiting for a key event like business confidence early on Wednesday GMT or the Fed’s meeting that night seems favourable for many participants.

Other releases this week, particularly Australian annual inflation on Wednesday morning GMT, are less important given that few analysts expect significant changes to monetary policy at least over the next two or three quarters. That said, Wednesday is likely to be a very active day for AUDUSD given the number of figures being released. 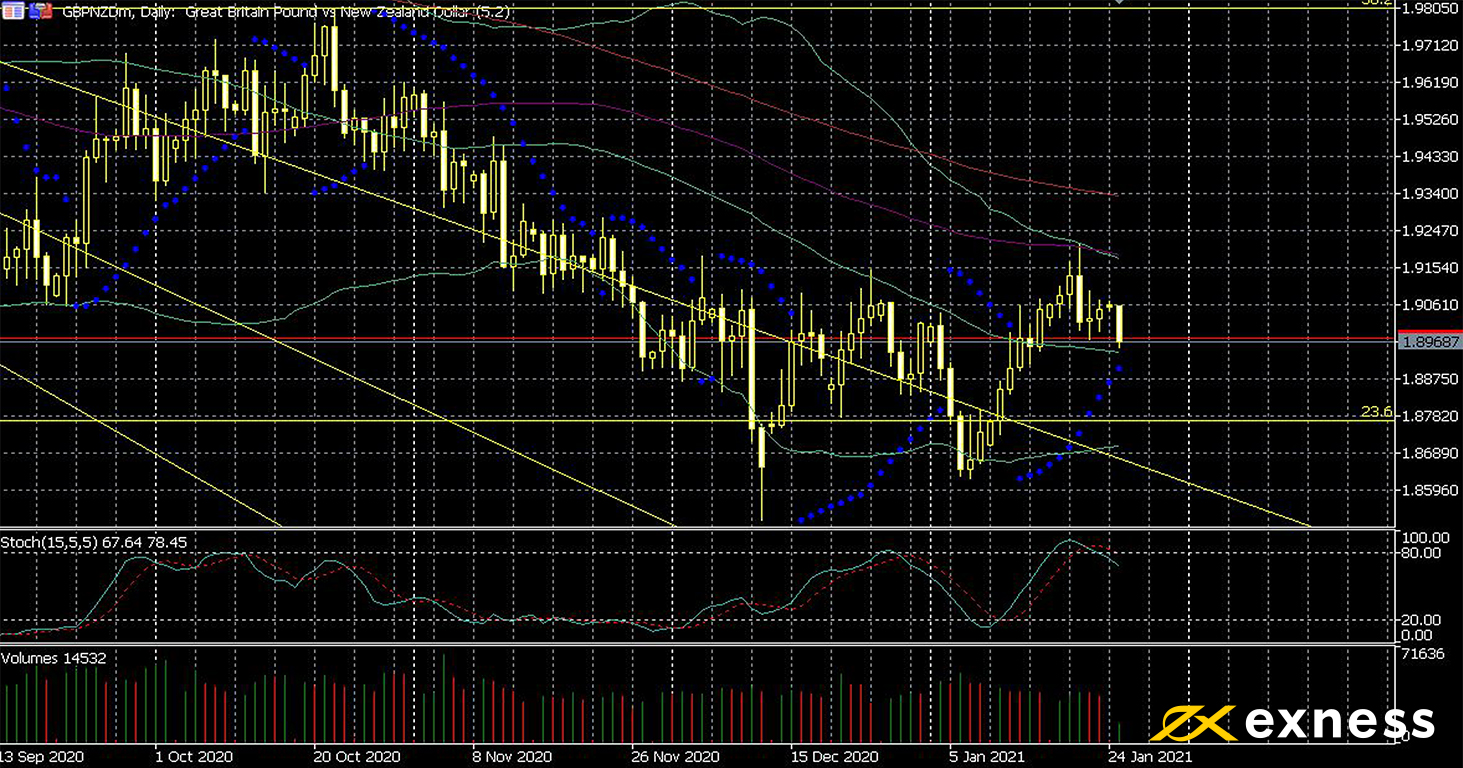 News affecting the pound generally remains negative this week despite the UK’s apparent advantage in manufacturing and distributing an approved vaccine. Meanwhile New Zealand remains among the least affected advanced economies by Covid-19, and the trade-sensitive Kiwi dollar like its Australian counterpart has been boosted by the return of ‘risk on’ since last month.

The pound’s recent gains don’t necessarily look like a dead cat bounce, but it does seem difficult to find a fundamental reason for the technical move up to continue. Now that price has only recently emerged from overbought and its test of the 100 SMA has failed, it’s reasonable to expect a move back down. Key areas this week include mainly the 50 SMA from Bands but also the 23.6% monthly Fibonacci retracement area and, below this, the 38.2% zone from the weekly Fibonacci fan.

GBPNZD will probably be significantly more volatile than the recent average around tomorrow morning’s key job data. The other critical release for this symbol is Wednesday night’s balance of trade from New Zealand. 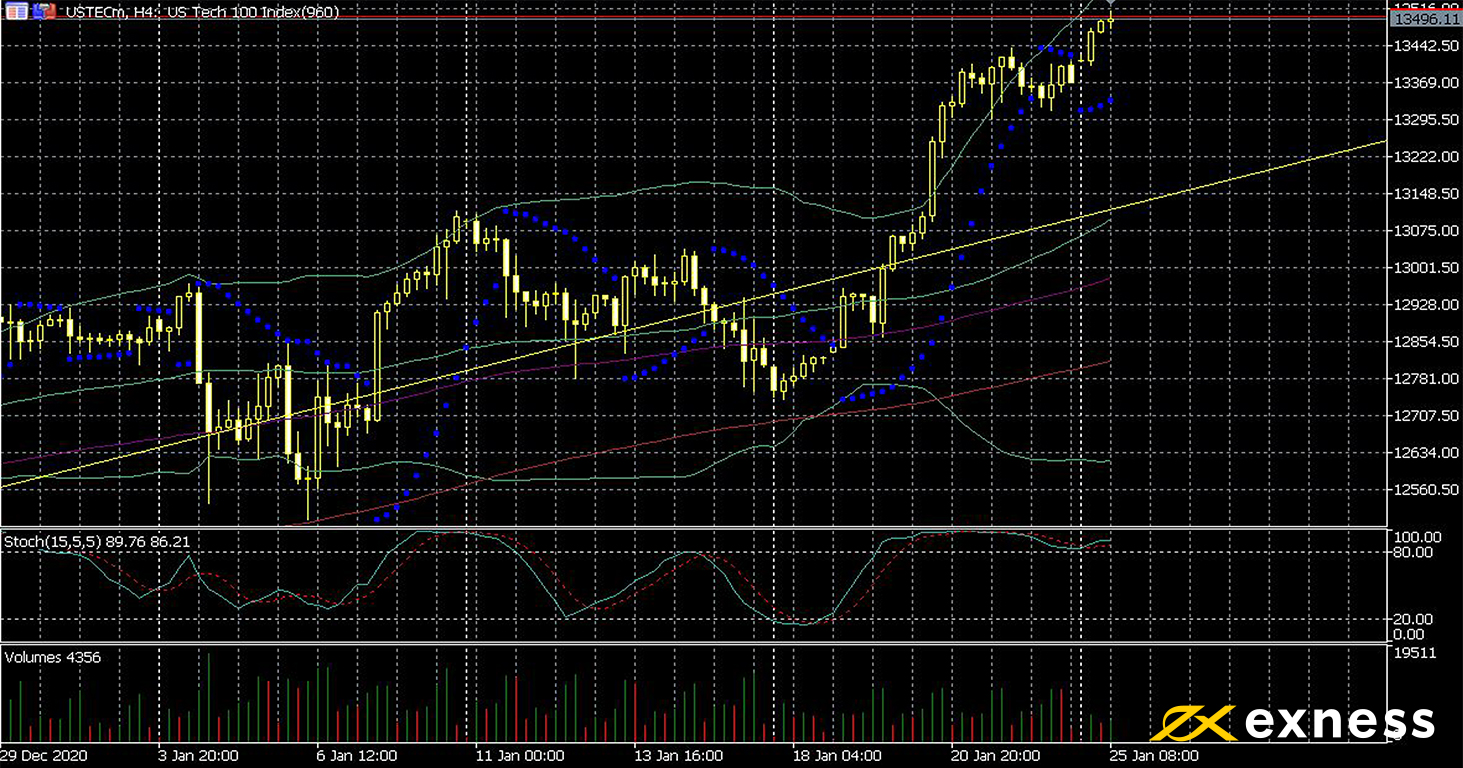 USTEC, the representative CFD based on the Nasdaq 100, moved up strongly last week as various large constituents such as Netflix (NFLX) reported record revenues and growth in numbers of customers. Shares in general continue to be boosted by monetary stimulus and positive sentiment, while the recent shift in cycle back to traditional defensive shares is being questioned as tech companies post exceptionally strong full year results.

Overbought is clearly the name of the game here, with the slow stochastic (15, 5, 5) at 90, an extension above the 38.2% area of the weekly Fibonacci fan and price very close to the upper deviation of Bollinger Bands (50, 0, 2). 14,000 is the next possible resistance as a psychological area; however, many new buyers will be wary of entering here at the top with such a large volume of data due this week.

Thank you for reading Exness Education’s preview of weekly forex data! Please join us again later in the week for analysis of FB and MCD as earnings season continues.