Most major shares and indices plus oil have declined so far today as the second wave of covid-19 continues apace in many countries. A number of major economies have reported record daily numbers of new cases since last week. Meanwhile markets increasingly seem to be pricing in a win by Joe Biden in next week’s American presidential election. Today’s preview of weekly forex data looks at EURUSD and XAUUSD.

There wasn’t much news from central banks last week, with most maintaining ultra-easy monetary policy. This week’s main events among them are the Bank of Canada’s meeting on Wednesday afternoon GMT and the ECB’s on Thursday.

The most important regular release this week is advance American GDP for the third quarter on Thursday afternoon. Friday is a big day for European data, with all of the eurozone’s largest economies and the whole bloc releasing advance Q3 GDP.

However, with this being the last full week before the American elections, we can probably expect polling, campaigning and other political news from the USA to have relatively more of an effect than data over the next few days. Despite the fact that most analysts consider the current base case of a win by Mr Biden to be strengthened since last week, the Democrats still face a significant challenge in gaining control of the Senate. 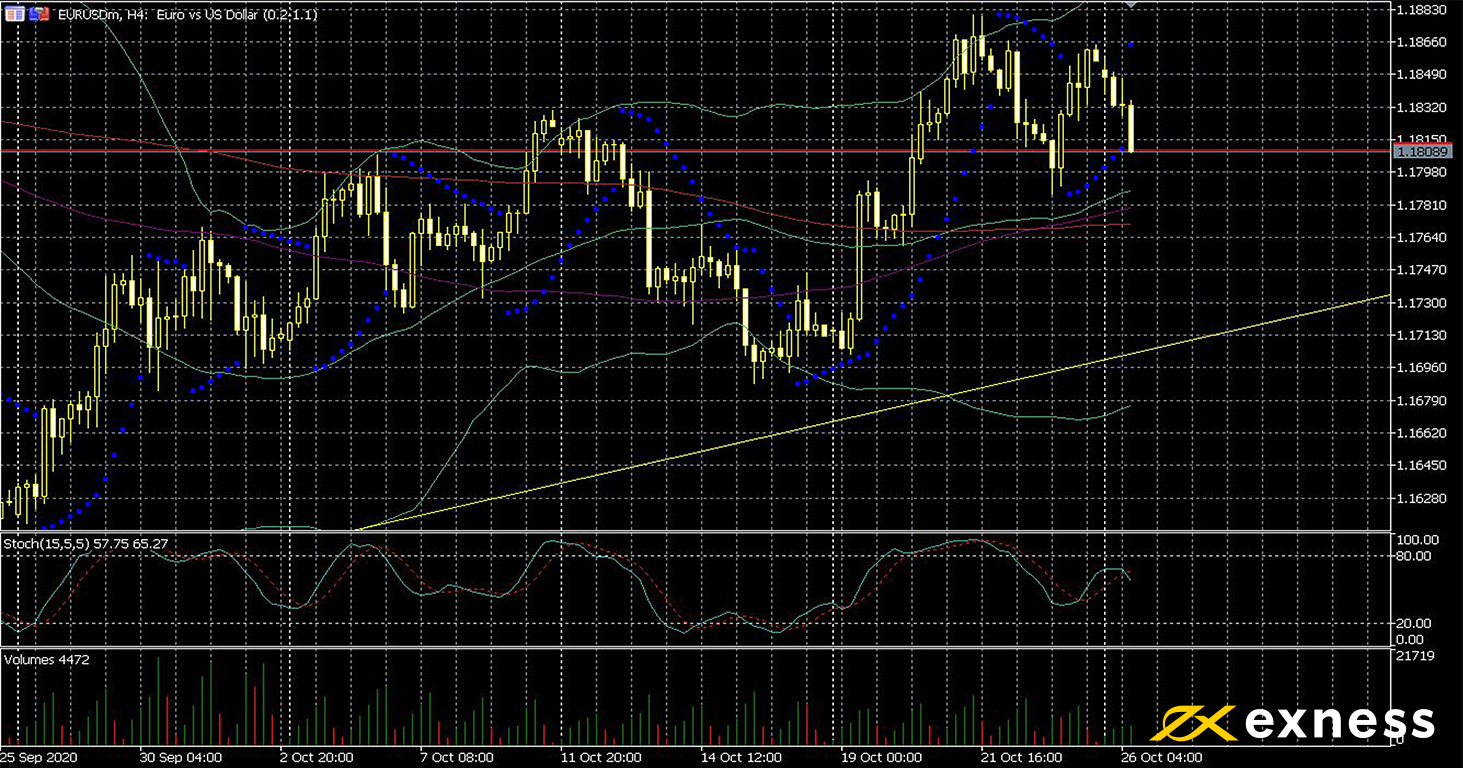 The dollar has strengthened against most currencies so far this week despite continuing negative fundamentals. The number of new cases of covid-19 in the USA was more than 83,000 on both Friday and Saturday, although the EU is also struggling to cope with the second wave of the virus. It now appears very unlikely that new fiscal stimulus can be agreed in the USA before next week’s elections.

From a technical point of view, it’s too early to call this the distribution phase of the euro’s recent uptrend. Based on the lack of any subsequent test of the three moving averages after last Monday’s very strong gains, this looks more like a consolidation. Volume remains fairly low so far today, understandable given that most traders except for those focusing on the very short term won’t want to commit ahead of next week’s elections.

GDP data from both the USA and various major economies in the eurozone are this week’s key releases that might drive some short-term volatility, offering such short-term traders more potential opportunities. Equally the ECB’s meeting on Thursday afternoon is likely to bring activity to EURUSD and other pairs with the euro. However, sustained movements this week don’t seem to be likely unless there’s a dramatic shift in the expectations for next week’s results. 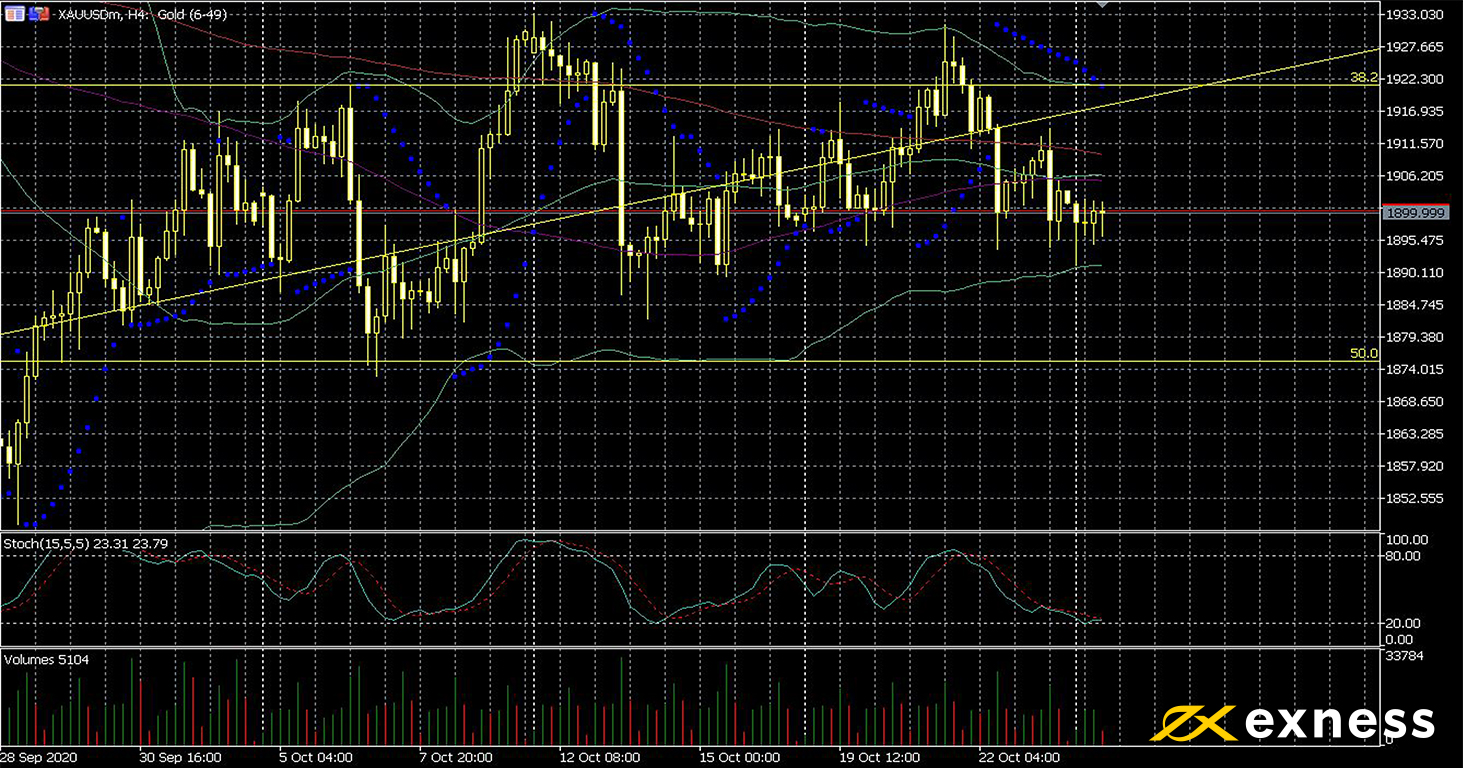 Based on fundamentals, one would probably expect gold to be somewhat higher than it is. A weak dollar, record covid-19 cases in many countries, lack of agreement on American fiscal stimulus and declines in most stock markets today would usually lead to the yellow metal making gains. The fact that XAUUSD hasn’t moved up so far today seems to have more to do with traders’ reluctance to order only a week before the contested American presidential election.

The crucial support in the next few days is the psychological area of $1,900. This had previously been a very strong support in late August and early September. Momentum after the break below the 38.2% area of the weekly Fibonacci fan has been fairly weak, with little impetus to push much under $1,900.

The negative signal from moving averages can probably be ignored unless there’s a clear break below the main support. As with euro-dollar, strong trend movements are unlikely over the next few days given the importance of politics next week.

Given the unexpected result in 2016, it seems unlikely that anybody is going to trust polling completely this week. How XAUUSD interacts with the current key support around $1,900 during key releases this week is critical for determining how much space there is for more drops in the event of Mr Trump winning.

Thank you for reading Exness Education’s preview of weekly forex data! Join us again tomorrow and on Thursday for analysis of USOIL and BTCUSD. Don’t forget that you can request a symbol to be covered in insights by commenting on Facebook.