Asian and European stock markets generally started the week positively after news this morning that China’s recovery appears to be stronger than expected. Chinese annual industrial profit jumped over 19% in August, the fourth consecutive month of increase. Industrial profits in 2020 are now only just over 4% lower than January-August 2019, which is being viewed by markets as an impressive recovery given the circumstances.

Comments this morning from the Bank of England’s Deputy Governor Dave Ramsden gave the pound a boost in many of its pairs. Dr Ramsden reiterated earlier determination from other members of the MPC to avoid negative rates anytime soon. Apart from these remarks, major central banks have been pretty inactive since last week. There’s also not much action on the monetary policy front this week except possibly Christine Lagarde’s testimony this afternoon: Dr Lagarde is due to appear in front of the European Parliament’s economic committee at 14.45 GMT.

Central banks in emerging economies were highly active last week, though. The Banco de Mexico cut its benchmark rate 0.25% against the half a percent expected, taking the rate to 4.25%. The big surprise was the Central Bank of the Republic of Turkey on the same day; the CBRT raised its one-week repo rate a whole two percent to 10.25%. The lira was exceptionally volatile in the aftermath but remained unable to hold gains, ending up at its lowest ever level against most currencies this morning: ₺7.75 to the dollar, ₺9.05 to the euro and above ₺10 to the pound sterling.

This week’s regular releases are dominated by Friday’s NFP. However, Wednesday’s GDP data from the UK and the USA are also likely to drive movement for most pairs with the dollar and the pound. Locally important releases include South African unemployment, inflation and balance of trade, making this a big week of data from South Africa in particular. 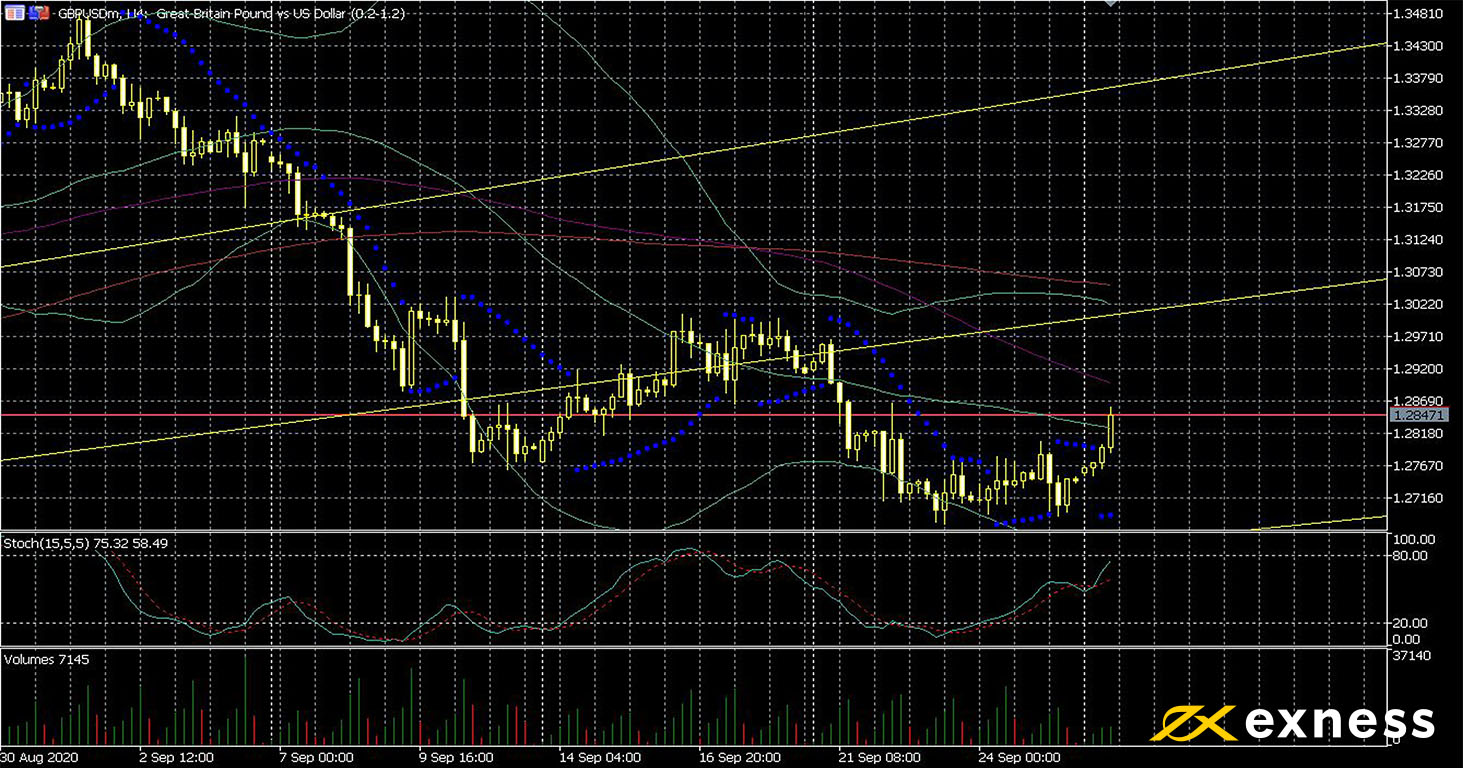 Despite general weakness in September, the pound moved up earlier today after comments from Dr Ramsden refuting the likelihood of negative rates in the near future. The British public’s confidence in the government’s handling of covid-19 remains pretty low while fear of the effects of a second wave on British retail is extremely high. Meanwhile optimism that a trade deal is in sight between the UK and EU has been on the wane.

From a technical perspective, the downtrend still seems to be active. Although price has now moved above the 50 SMA from Bands, this remains below both of the 100 and 200 SMAs. Volume has been low so far today. Behaviour near the 50% area of the daily Fibonacci fan around this week’s key releases could be important for ongoing direction.

This week’s main fundamental event is Friday’s NFP. The consensus currently stands at around 850,000 against the previous 1.37 million. Apart from the NFP, both the UK and the USA release final GDP growth for Q2 plus a range of other figures on Wednesday. High volatility is to be expected for cable for most of the second half of this week. Wednesday’s scheduled presidential debate in the USA should also be monitored by traders at least in summary given that the result (and how clear it might be) is impossible to predict. 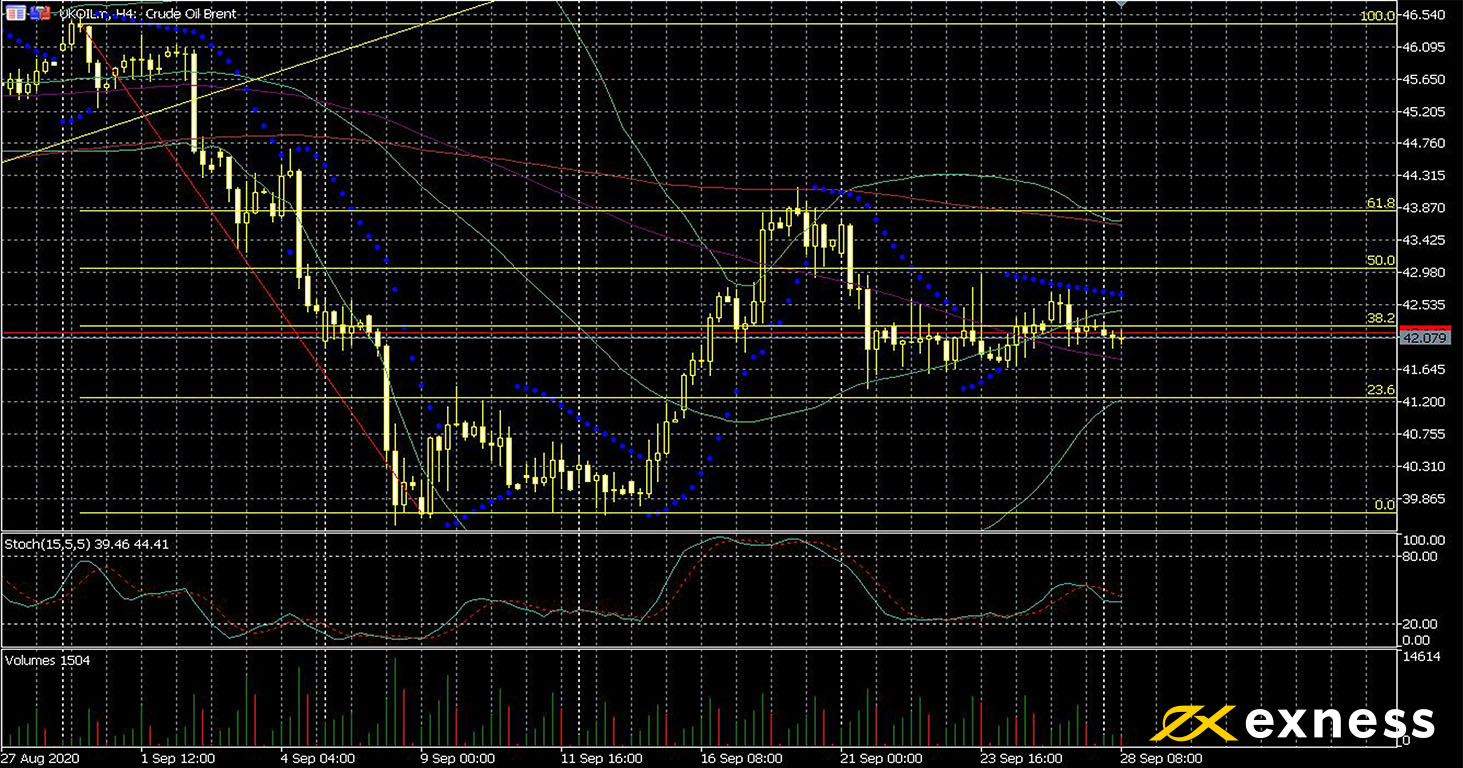 Most observers would have expected at least a small uptick in the price of crude oil amid the current clashes between Armenia and Azerbaijan over Nagorno-Karabakh given the proximity of several major pipelines to the disputed area. However, this has yet to materialise. Equally, the latest phase of weakness for the dollar should logically result in some gains for crude sooner or later.

The main negative factor overshadowing possible fundamental support for prices above $42 is the weaker outlook for demand. The continuing increases in cases of covid-19 in much of Europe and other major economies around the world is a concern for bulls despite unusually high positivity in China. Equally, there are some signs that supply is starting to increase again in various regions. For example, Bloomberg reported yesterday that Libyan supply has tripled compared with last month to about 250,000 barrels per day since the country’s blockade was lifted partially last week.

The technical situation has been pretty stable since this time last week in the absence of much significant new information. The 50 SMA from Bands golden crossed the 100 on Thursday morning only for price to retreat below the 38.2% daily Fibonacci retracement area today. The focus this week is on the NFP and American GDP for how the dollar might be affected, but traders should not overlook regular stock data. 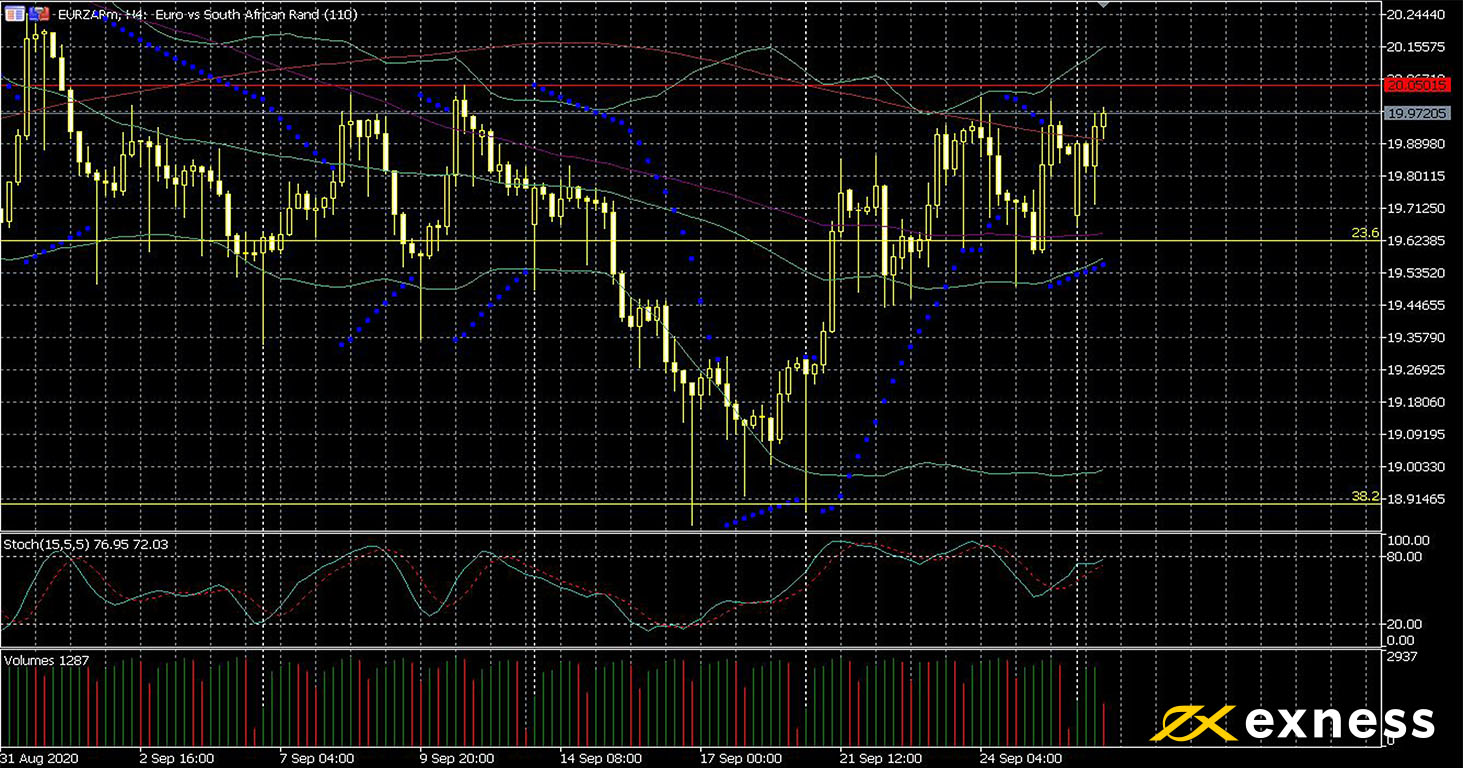 The general change in tone towards ‘risk off’ since last week and the euro’s strength have contributed to the recent gains for EURZAR. South Africa’s economy has also generally taken the bigger hit from covid-19 than the average in the eurozone.

It’s probably too early to assert a resumption of the euro’s primary uptrend on the higher timeframes but there are clear signs of weaker momentum downward. Price has reached overbought twice since the start of last week but continued to hold gains. The 23.6% retracement area of the daily Fibo could be an important pivot point over the next few days. To the upside, exactly R 20 is an important psychological resistance.

Tuesday and Wednesday are crucial days for South African data. The number of important releases on Wednesday especially means that volatility is likely to be very high for euro-rand and most other pairs with the rand as well.