Weekly forex data: RBA in view ahead of the NFP

Weekly forex data: RBA in view ahead of the NFP

At the end of an amazingly good month for shares on the whole, sentiment remains fairly positive at the beginning of this week despite deaths from covid-19 around the world reaching one and a half million. Encouraging results from trials of vaccines and the decreased likelihood of a seriously disrupted presidential transition in the USA have boosted many ‘risk on’ instruments. This preview of weekly forex data takes a closer look at USDCAD, XAUUSD and EURAUD.

There was no significant activity among central banks last week. Tomorrow’s key event in monetary policy is the meeting of the Reserve Bank of Australia, with the bank expected to leave its cash rate on hold at the record low of 0.1%. The Aussie dollar is likely to be a focus for many traders this week due to the RBA’s meeting and GDP data plus Wednesday night’s balance of trade from Australia.

The main event this week in markets is non-farm payrolls on Friday; the consensus stands at around half a million. Canadian employment data plus balance of trade from both Canada and the USA, also at 13.30 GMT on Friday, round off the week’s most important regular data. 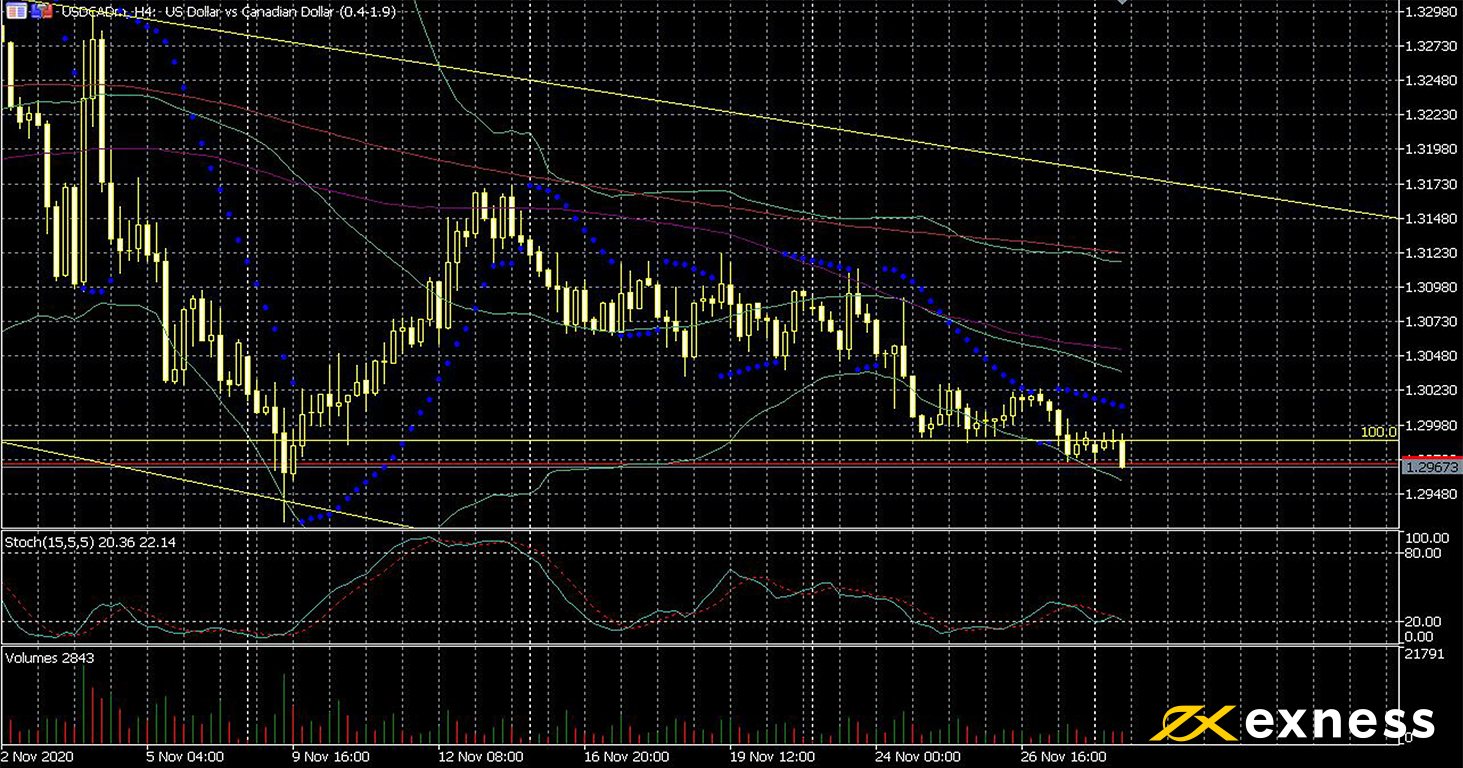 The greenback has moved back down against its northern counterpart since short-term volatility after the elections has ebbed away. As last week, expected fresh fiscal stimulus and tighter measures against covid-19 in the USA are negative for the US dollar. Meanwhile the Canadian dollar has received fundamental support from crude oil’s very strong gains this month so far.

The 100% weekly Fibonacci retracement area – i.e. full retracement of all the US dollar’s gains in the first quarter of 2020 – has been a crucial support for some weeks. However, it now appears that this zone could be broken. The relatively large real body of the current period moving below the 100% Fibo combined with no oversold signal provides favourable conditions for continuation downward.

Friday is a particularly active day of data for USDCAD, with balance of trade from both countries and a range of Canadian job data in addition to the all-important NFP. Losses for dollar-loonie seem likely over the next few days unless tomorrow’s GDP data are notably surprising but the outlook further ahead depends on Friday’s results. 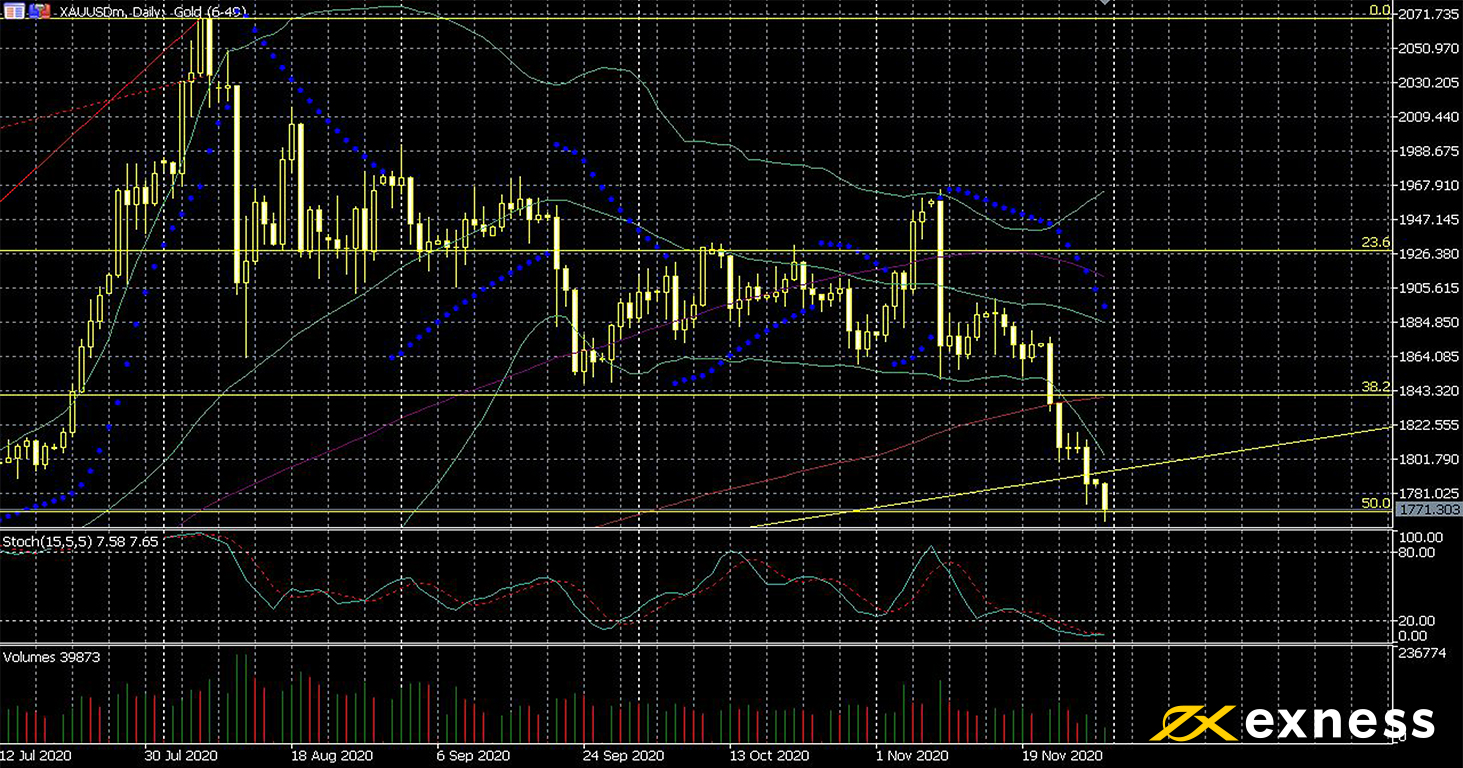 Gold has remained under strong pressure this week, on track for the worst monthly performance in over four years. Positivity from tests of vaccines and an unexpectedly smooth presidential transition so far have dented demand for the yellow metal significantly.

Equally, from a technical perspective, gold had been clearly overbought on the weekly chart for months until August. Now that more fundamentals are negative, the conditions have been right for a breakout to the downside below the 38.2% weekly Fibonacci retracement area. That said, there’s no evidence that the very long-term uptrend on the weekly charts is over yet. In fact, the current zone around the 50% weekly Fibo retracement might be the source of a bounce or even the resumption of the uptrend if there’s a significant change in sentiment this week.

As above, the NFP is the key release this week for gold. However, traders will also be watching the USA’s balance of trade at the same time on Friday. Rumours and actual news of vaccines remain important, as do events in stock markets – corrections by major indices would spur demand for gold. 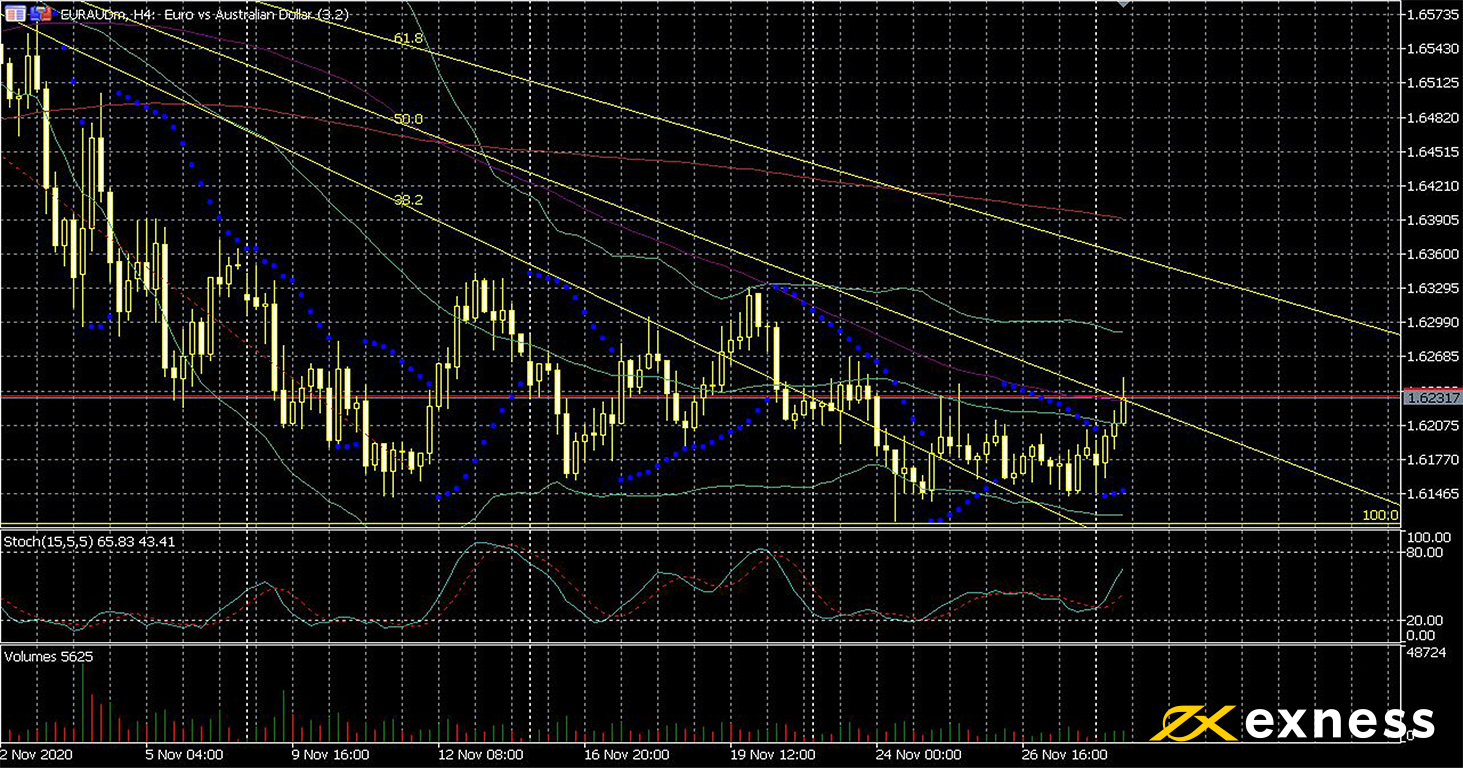 The Aussie dollar has faced headwinds so far this week as Australia’s dispute with China continues to worsen. China has imposed tariffs of up to 200% on key Australian exports including wine and some industrial commodities. The euro meanwhile has been strong against most currencies over the last few weeks. There are no clear signs yet of a double-dip recession in the eurozone, and rollout of vaccines for covid-19 is expected in key economies like Germany and France over the next two to three months.

TA seems to favour this area for a bounce given its proximity to the 100% weekly Fibonacci retracement area. As with USDCAD above, this represents complete retracement of all the euro’s gains since late February. The 50% area of the daily Fibonacci fan is currently being tested. Given the low volume since last week, though, traders probably should not expect a dramatic bounce unless the news from the RBA overnight is especially negative.

Thank you for reading Exness Education’s preview of weekly forex data! Join us again tomorrow and on Thursday for analysis of BTCKRW and EURUSD. Don’t forget that you can request a symbol to be covered in insights by commenting on Facebook.