Various markets have started the week somewhat cautiously amid mixed trade data from China as exports dropped and an unexpected decline in German factory orders. The primary concentrations of this week’s data are inflation and trade around the world; this preview of weekly forex data looks at USDCAD, USDCNH and EURGBP.

There was no major activity among central banks last week. The Reserve Bank of Australia stressed at its meeting last Tuesday that the cash rate will not rise until 2023 at the earliest. This week sees the Bank of Canada, the European Central Bank and the Central Bank of the Russian Federation meet successively on Wednesday, Thursday and Friday. Any change by the first two seems very unlikely, but traders will focus on comments from policymakers about inflation and the possible timeline for tightening next year and in 2023. However, the CBRF is expected to hike its key rate again to 5.25%.

This second week of the month is dominated by data on inflation from the USA, China, Switzerland, Mexico and Sweden. Commodities and particularly gold are likely to be in focus around the American and Chinese releases. The other crucial figures are balance of trade from China, which missed the consensus by about $5 billion this morning, the USA, France, Canada, Germany and the UK.

This is a highly active week in terms of important economic data, so traders of CFDs in general will probably focus on forex and commodities somewhat more than shares and cryptocurrencies. Volatility for gold, oil and relevant forex pairs is likely to be significant around the key releases. 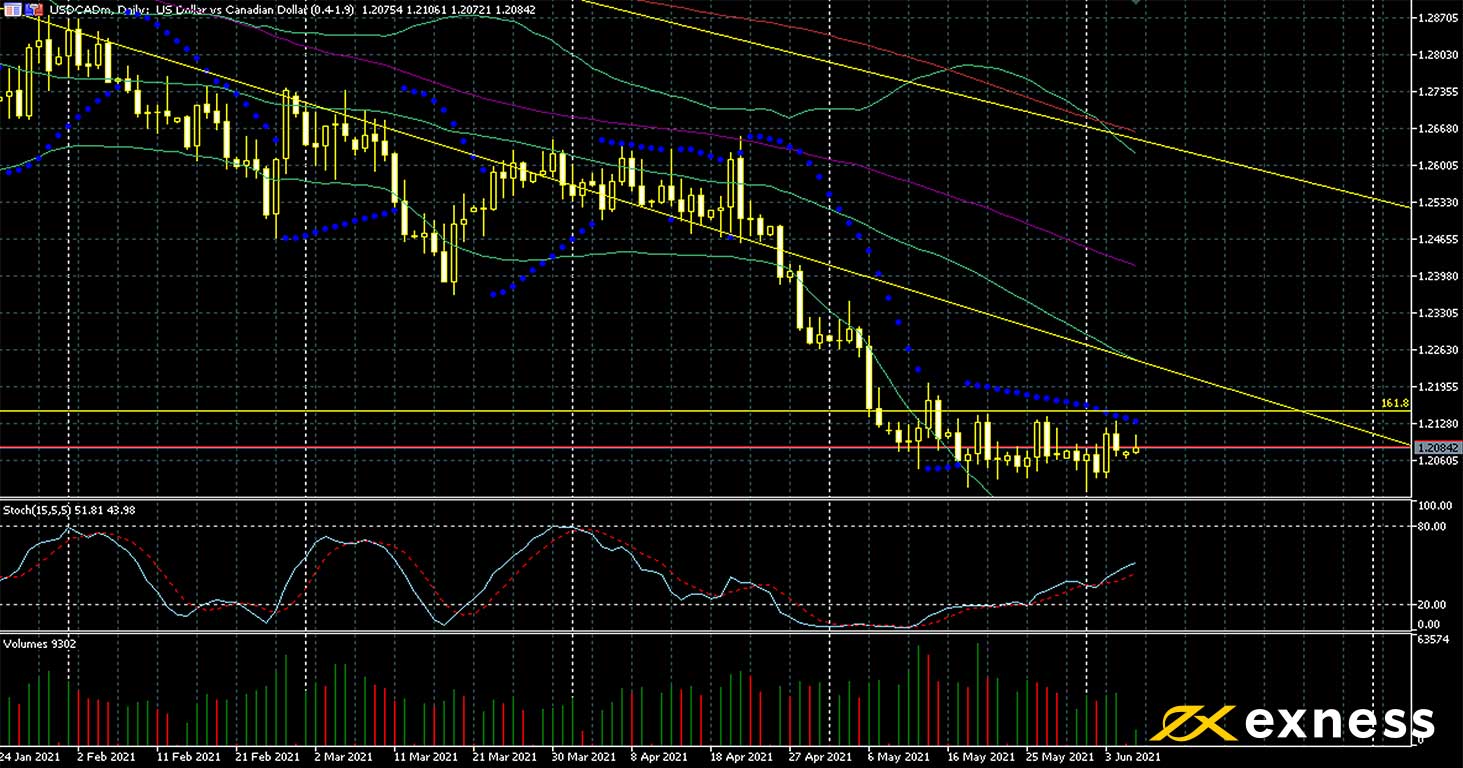 The greenback’s very strong downtrend against its northern counterpart appears to have lost momentum over the last few weeks as benchmark decade Treasury bonds have held about 0.15% higher than the Canadian equivalent and crude oil has not appreciated significantly since early March’s high. Participants here increasingly expect the Fed to start tapering sooner than projected at the end of last year and very likely sooner than the BoC.

There is no longer any indication of oversold here from either Bollinger Bands or the slow stochastic, but spikes in buying volume around the middle of last month haven’t led to any clear bounces either. Price slightly below the 161.8% weekly Fibonacci extension area based on dollar-loonie’s gains in March 2020 also suggests ongoing consolidation given the strength of this zone as a technical reference and the importance of C$1.20 as a psychological support, being a low of more than six years.

Balance of trade from both countries plus of course American core inflation are the key releases to watch this week. The BoC’s meeting on Wednesday afternoon GMT is unlikely to generate a clear movement on this chart but volatility during the subsequent press conference could increase as traders try to read behind the lines of comments. 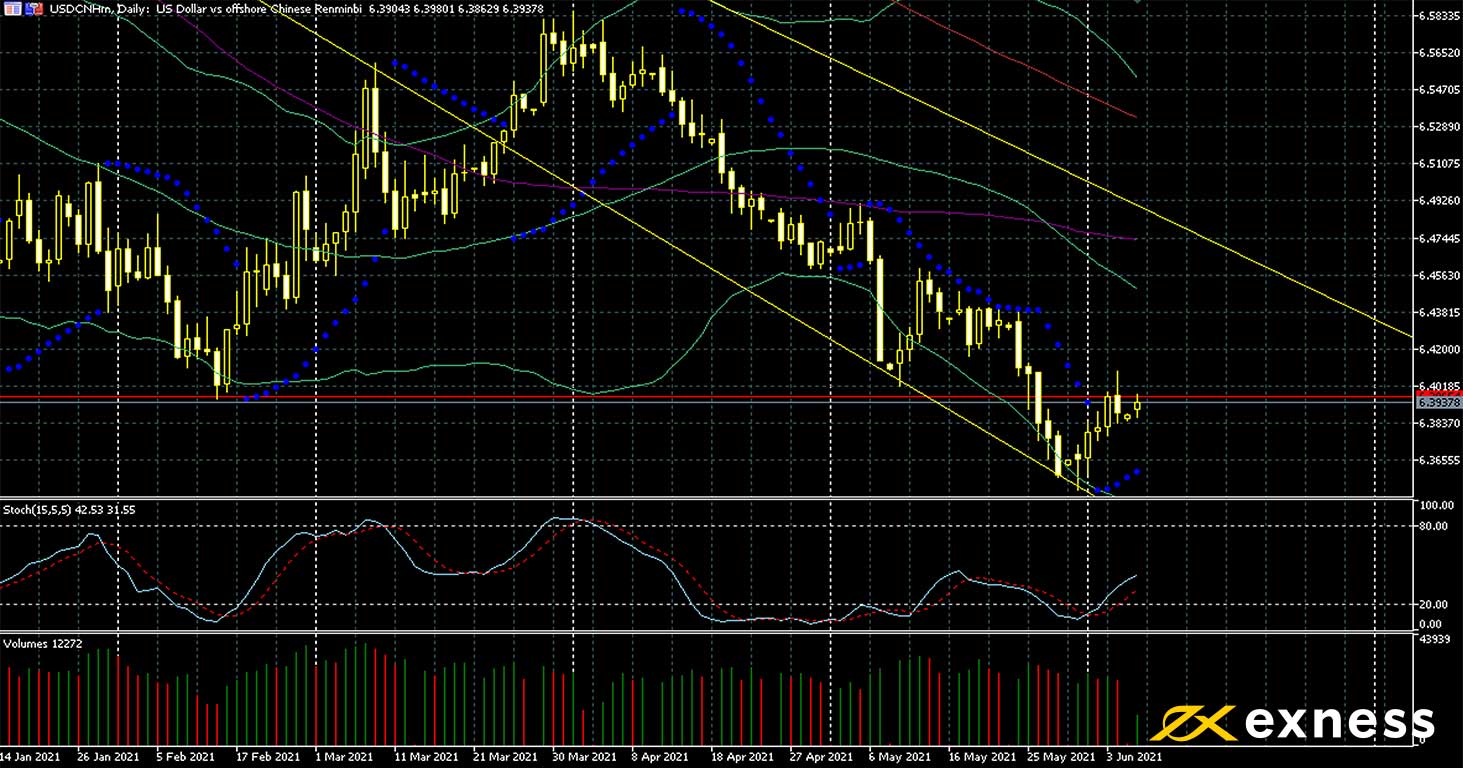 The current leg down for USDCNH appears to be weaker so far compared to this pair’s exceptionally strong losses in Q2 and Q3 last year. Although American data have been somewhat mixed recently, there is evidence that jobs and growth are recovering faster than initially expected around this time last year and, as above, increasing expectations that the Fed might move to tighten earlier rather than later next year. This morning’s weaker balance of trade from China – about $5 billion lower than the consensus at just over $45 billion – hasn’t affected the redback clearly.

Follow through after the death cross of the 50 and 100 SMAs was fairly weak, with a small bounce over the last few days coming quite quickly after the move into oversold. March 2018’s ¥6.235 would be an obvious target for sellers, but it’s difficult to see this scenario at the moment unless sentiment and the tone of data shift negatively for the dollar.

As for dollar-loonie, American inflation and balance of trade are crucial releases for this symbol. Chinese inflation on Wednesday, which is expected to increase from 0.9% to about 1.6%, is also a key figure this week. 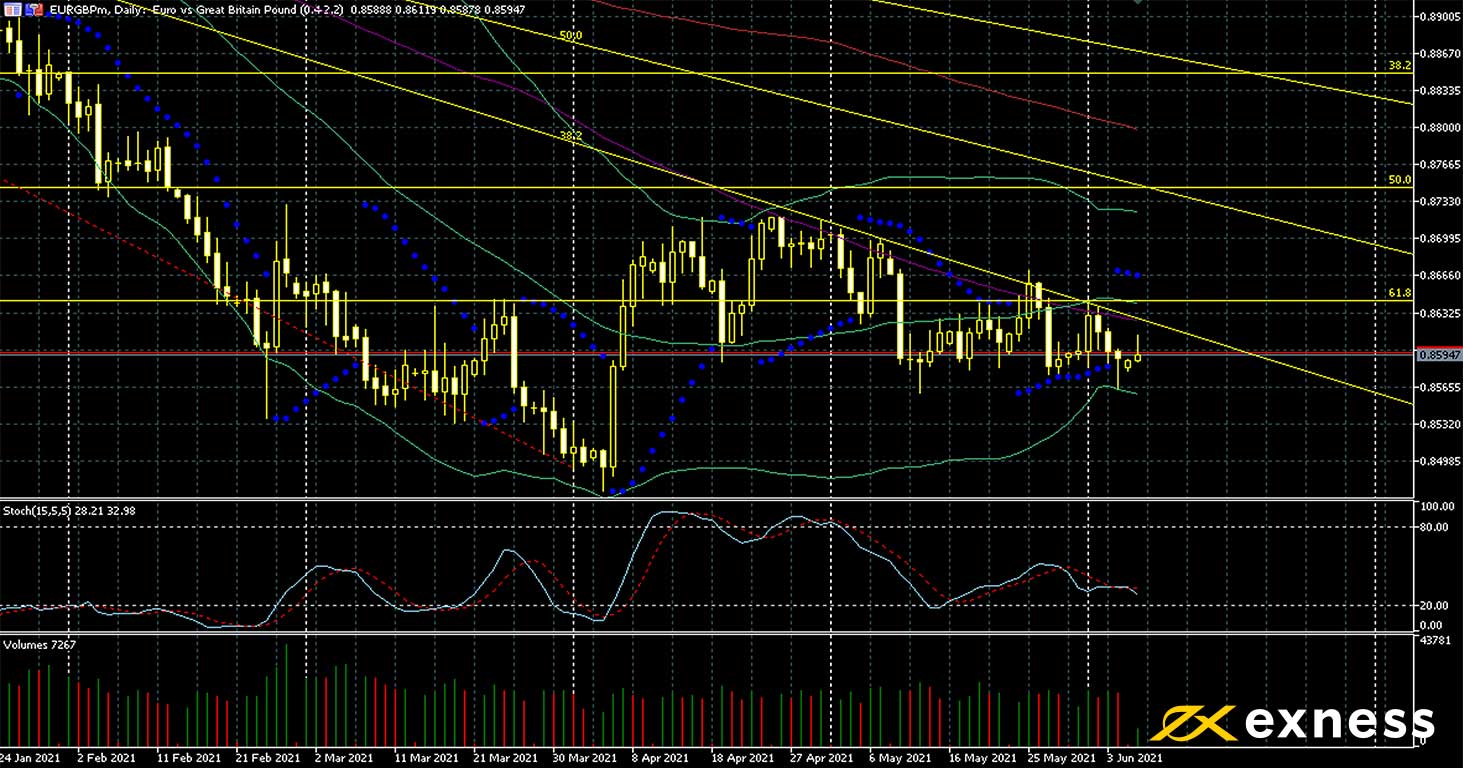 The pound is basically unchanged against the euro compared to where it started last week. However, data from the UK recently have been quite strong, notably service and construction PMI both above 60 last week. For more details on the technical picture for euro-pound, please consult Friday’s TA from Exness Education at https://education.exness.com/technical-analysis-of-eurgbp/.

Thank you for reading Exness Education’s preview of weekly forex data! Please join us again later in the week for more analysis and summaries of recent key reports.