Joe Biden’s victory in last week’s presidential election in the USA has brought ‘risk on’ back to the fore for most instruments, with many shares and most emerging currencies having made strong gains since the end of last week. This preview of weekly forex data takes a closer look at the charts of and releases for USDMXN, EURNZD and GBPZAR.

Although Mr Biden’s win was by a smaller margin than had been expected by many participants in financial markets, the realisation of the ‘base case’ nevertheless has had most of the effects predicted so far. The dollar has weakened to two-month lows against the euro and various other currencies while the ‘Biden Bounce’ for stock markets was in full swing this morning.

The main event among central banks last week was the Reserve Bank of Australia’s cut of its cash rate by 0.15% as expected, taking it to 0.1%, a new record low. Eyes are mainly on the Reserve Bank of New Zealand this week and whether the Kiwi central bank will follow and cut its own cash rate on Wednesday morning despite the consensus currently being for a hold at 0.25%. The Banco de México is also due to meet on Thursday night GMT; a cut of 0.25% to 4% seems to be possible at the meeting.

This is a highly active week in terms of regular economic data. The standout release is the UK’s claimant count change tomorrow morning GMT, but other critical releases include Chinese and American inflation, British balance of trade and second estimate GDP growth from the eurozone. With the American elections now out of the way and the results clear, it seems reasonable to expect that data will return to prominence this week and drive more volatility for the symbols affected. 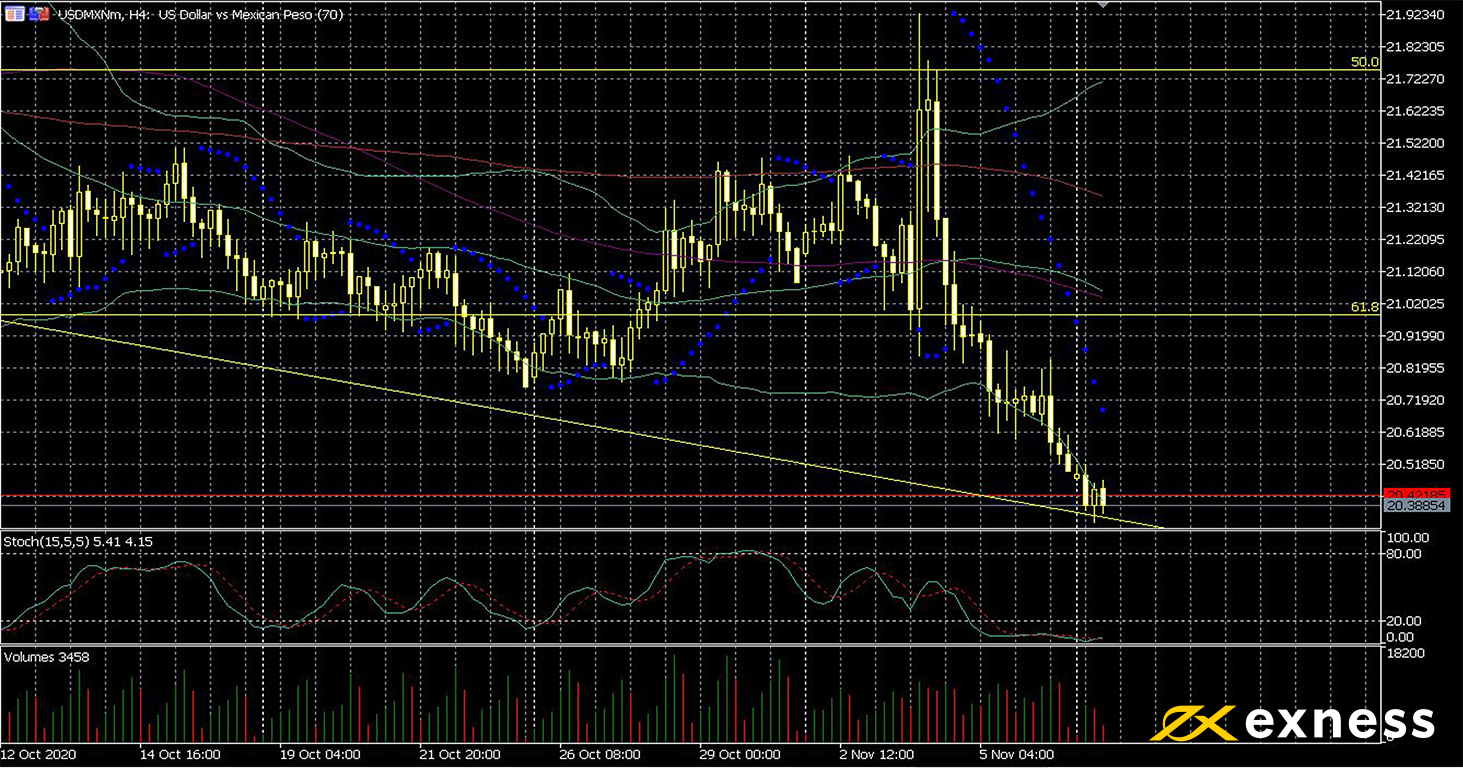 As expected in the aftermath of a win by Mr Biden, the dollar has made sharp losses against emerging currencies. One of the main factors behind this is the expectation that while the ongoing trade disputes between the USA and various countries will continue, the Democrats’ approach to these will be much less confrontational and more diplomatic. The Democrats are also more likely to take effective action to limit the spread of covid-19 in the USA, which would probably be accompanied by more easy fiscal and monetary policy.

The very high volatility in the middle of last week was consistent with what would typically be expected during the count of a presidential election. The downward movement became clear on Wednesday, with a clear break below the 61.8% weekly Fibonacci retracement area. Price is now testing the upper limit of the weekly Fibonacci fan based on the peso’s recovery since April.

The main concern for new sellers here is oversold, so a bounce on Thursday night if Banxico does cut its benchmark rate might provide a better entry. American inflation earlier on Thursday is also likely to generate short-term opportunities in both directions. 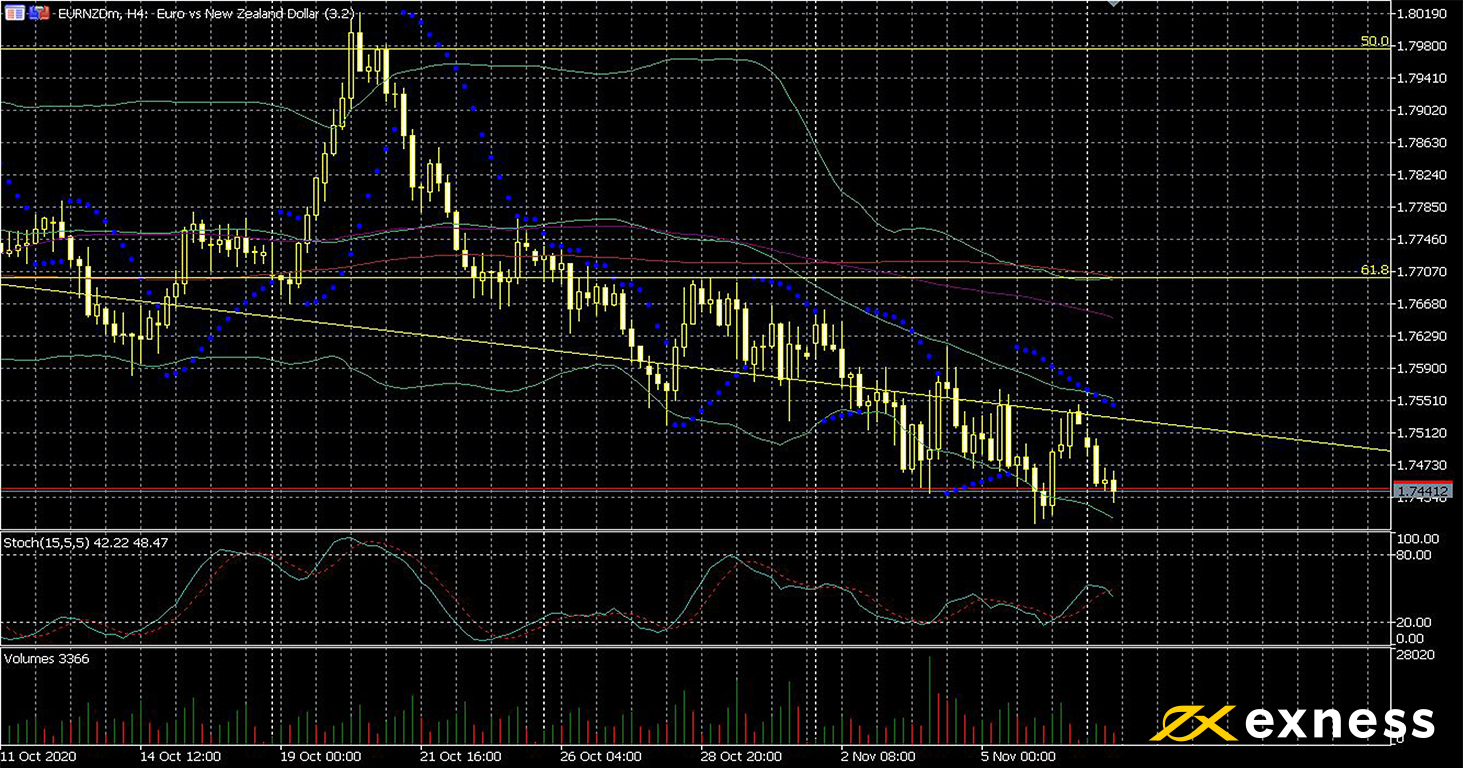 A less negative outlook for trade over the next few quarters has given the Kiwi dollar a boost against most currencies much like other ‘risk-on’ instruments. On the other hand, the outlook for New Zealand’s exports remains weak in the short term while Germany’s balance of trade increased slightly last month as announced this morning. Job data have understandably been disappointing in both the EU and New Zealand over the last few months.

From a technical perspective, the downtrend seems to be gaining strength. Price has now broken through the 61.8% area of the weekly Fibonacci fan. Moving averages give a strong sell signal. However, there is no indication at the moment of oversold from the slow stochastic (15, 5, 5) or Bollinger Bands (50, 0, 2). There seems to be room for more losses by the euro against the Kiwi dollar this week, particularly if the RBNZ follows the RBA in cutting rates. 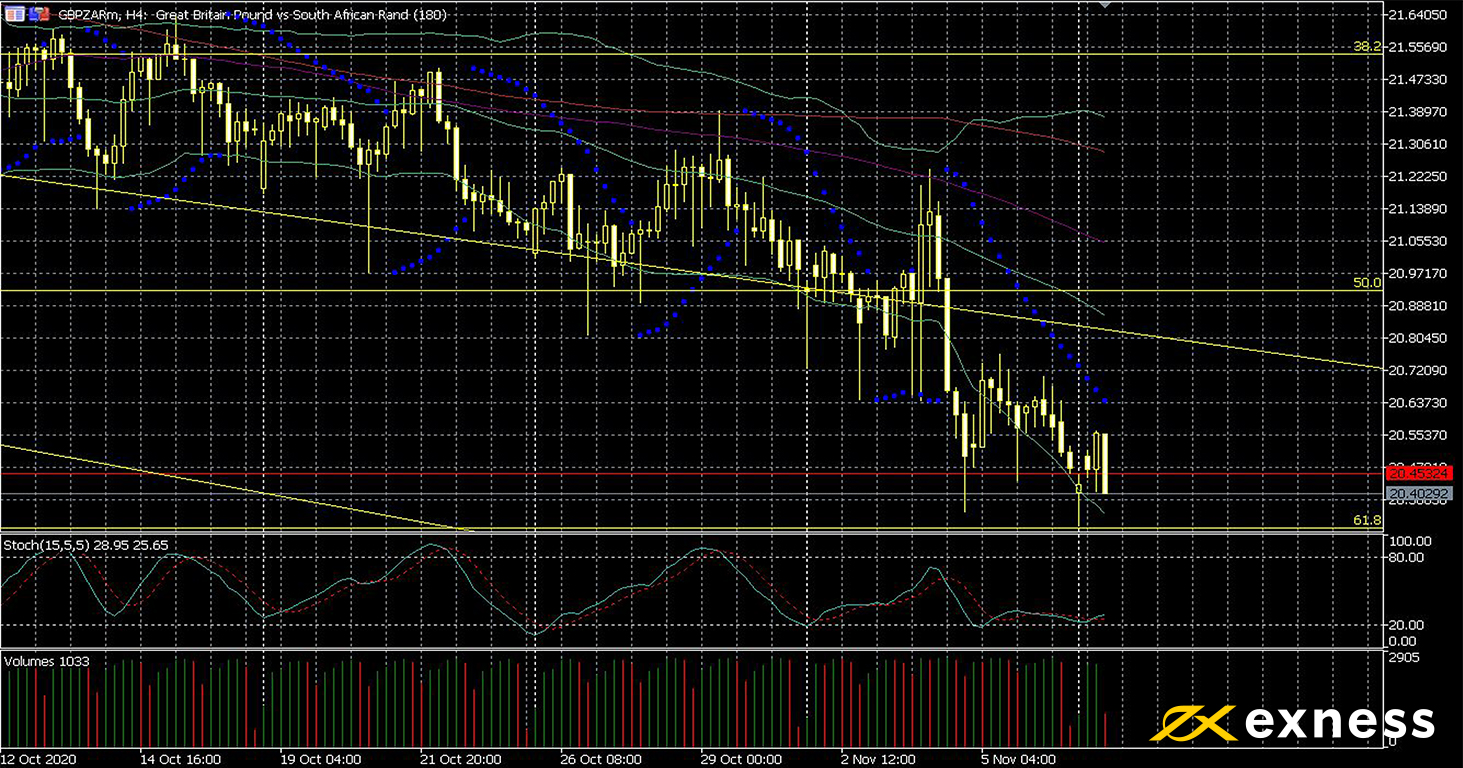 As other emerging currencies, the rand has strengthened significantly in the aftermath of last week’s American elections. Sentiment on the pound remains fragile given that a minimal trade deal between the UK and the EU still seems to be the best possible outcome of ongoing talks. However, South Africa is among the worst hit African countries from covid-19. Since the start of the crisis in financial markets in late February, the country has released successive record drops in quarterly GDP and record high unemployment.

Analysis of the chart itself shows us another downtrend gaining strength. The current downward engulfing pattern would suggest more losses after completion. The key support into next week is likely to be the 61.8% weekly Fibonacci retracement area. To the upside, a break beyond the equivalent 50% zone might signal more gains in the short term.

Claimant count change is the critically important release for pound-rand this week. However, the importance of other British releases, notably balance of trade, and of course South African quarterly unemployment means that volatility for GBPZAR is likely to be extremely high on Thursday. It might behoove traders to use conservative stops and targets in the second half of the week.

Thank you for reading Exness Education’s preview of weekly forex data! Join us again tomorrow and on Thursday for analysis of XAUUSD and USDJPY. Don’t forget that you can request a symbol to be covered in insights by commenting on Facebook.