The focus of data in forex markets this week is GDP growth in Germany and China. Some of the other key releases include American inflation tomorrow afternoon GMT and rate decisions in Turkey and South Africa on Thursday. Read on for Exness’ weekly forex data preview.

The dollar has been weaker in general since the end of last week in the aftermath of a somewhat disappointing NFP. Despite the previous figure being revised upward to 256,000, Friday’s release for December came in at 145,000, below the expected 164,000.

The main activity among central banks last week was in Romania, Poland and Israel. Each of these banks kept their rate on hold as expected. The key data so far this week was British balance of trade for November. £4 billion is much higher than the consensus of negative £3.2 billion; however, October’s figure was revised downward to negative £1.34 billion. 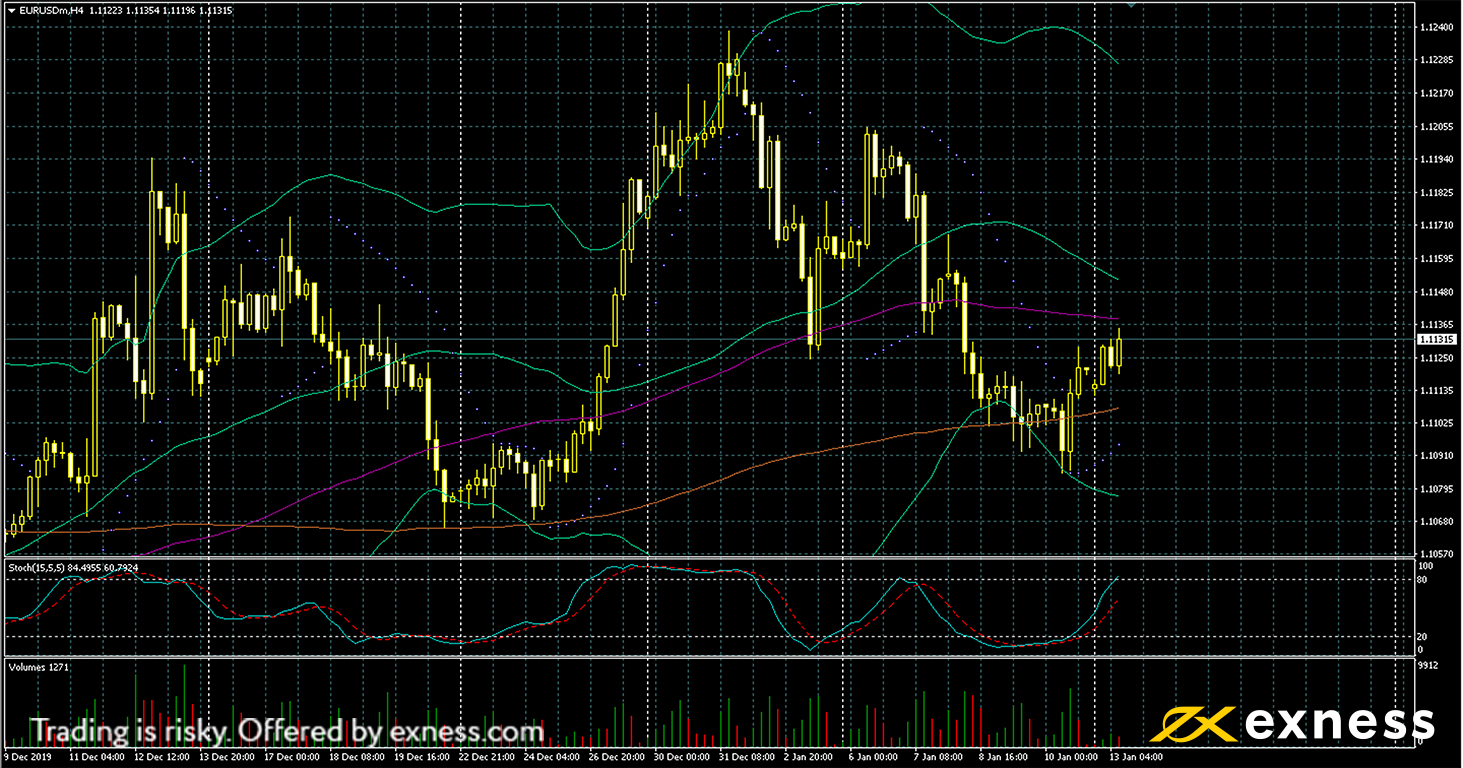 The euro made some gains against the dollar in the aftermath of Friday afternoon’s weaker NFP. So far, though EUR–USD has failed to push significantly higher. Data from the EU remains generally quite modest, although not as bad as some of the releases this time last year by any means.

Germany’s balance of trade was down slightly to €18.3 billion last Thursday, but the previous release for October was revised upward to €21.3 billion. On the other hand, business confidence in the EU was down more significantly. The Euro Area Business Climate Indicator printed negative 0.25 last Wednesday, the worst result since August 2013 and below the expectation of around negative 0.15.

The technical picture for euro-dollar on H4 is somewhat unclear. Price is currently within the value area between the 100 and 200 SMAs. There is no clear signal from the slow stochastic, but one can observe significantly lower buying volume so far this week. The first target for bulls here would be the 100-period simple moving average in the area of $1.1138.

Weaker American data this week would help price to break through from the 100 SMA. Notable positive news from ongoing trade talks would also provide fundamental support. Nevertheless, extended gains for euro-dollar don’t appear to be likely this week. 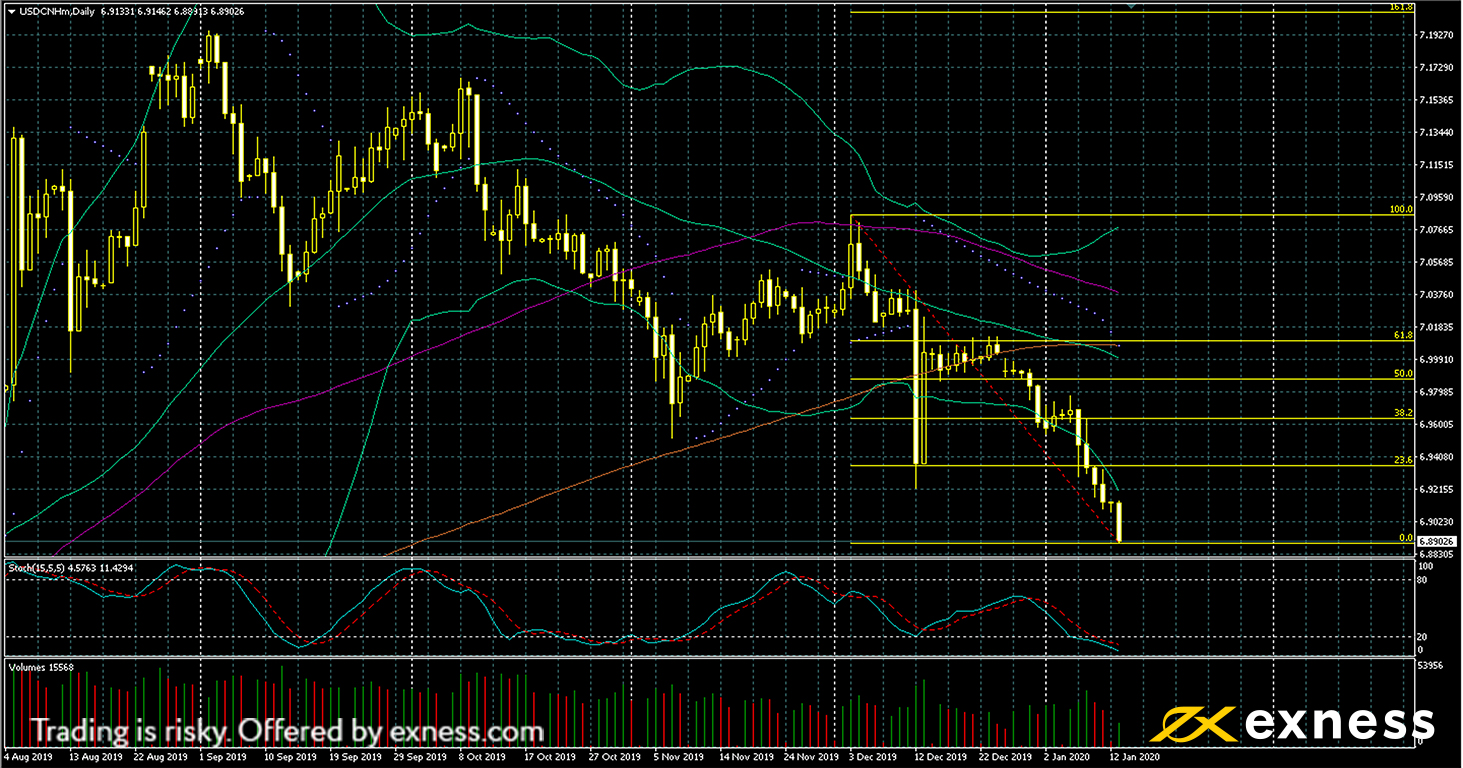 USD–CNH has gained pace again in its downward movement so far this week. Trade negotiations have been ongoing in January, although there’s been less focus on these in the context of recent tension between the USA and Iran. Expectations seem to be holding for now for a resolution or at least further decrease in trade tension sooner or later, so the offshore yuan is gaining some strength as expected. Data from both the USA and China was fairly disappointing last week in general, but the NFP has had the biggest impact here.

The chart looks very negative. Death crosses of the 50 SMA with the 100 and 200 SMAs occurred in the middle of November and last week respectively. Selling volume has also remained relatively high since the end of summer 2019.

On the other hand, selling saturation has dominated since the end of last year. This is likely to be the sixth consecutive daily close outside the lower deviation of Bands. The main line of the slow stochastic also reads less than 5. Selling here would be very risky even if the data strongly favours such an action; most traders would prefer to wait for a retracement upward to the area of the 23.6% Fibo at least and a pause in oversold conditions. 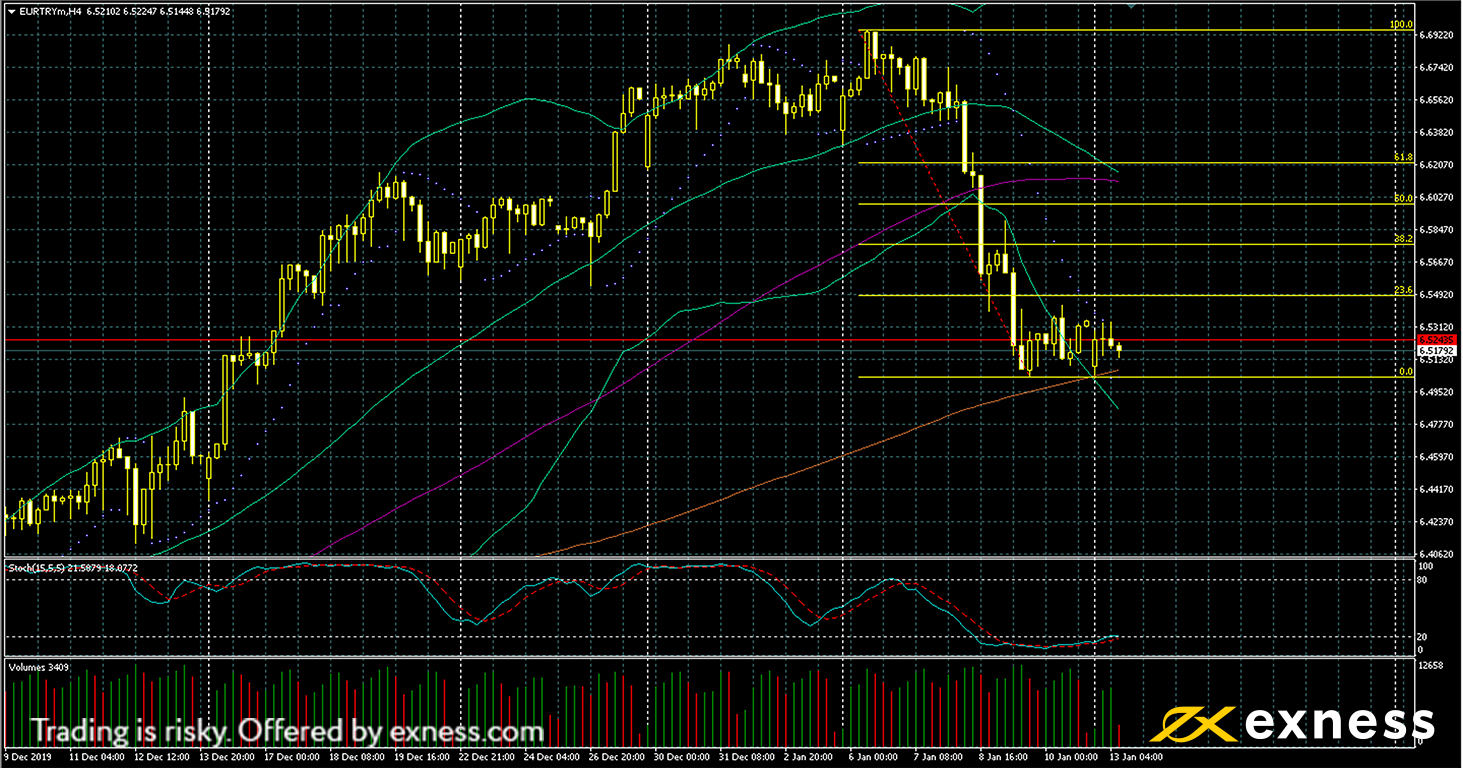 The euro continued to consolidate recent losses against the lira this morning. EUR–TRY remains close to three-week lows as Turkish employment decreased to 13.4% on Friday. A pause in the Central Bank of the Republic of Turkey’s cuts to its one-week repo rate seems to be fully priced in at the time of writing.

Technical indicators here strongly suggest consolidation. The clear oversold reading from the slow stochastic last week came before an upward crossover, but price hasn’t followed through on Wednesday night’s upward engulfing pattern. The 200 SMA also seems to be a strong support which is likely to resist further testing.

Most traders of this symbol will place prime importance on the meeting of the CBRT on Thursday morning GMT. Data from Germany could also provide more direction this week. 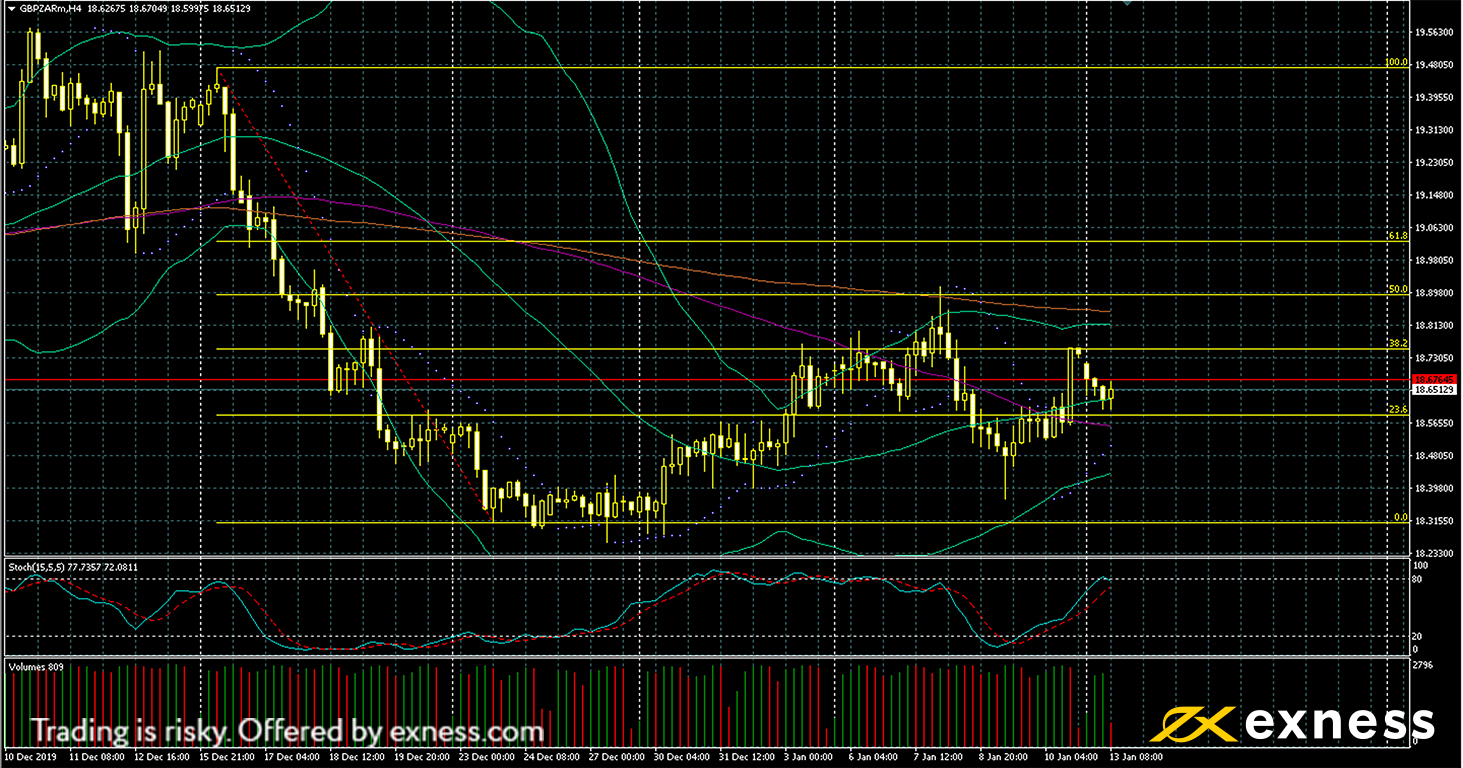 GBP–ZAR ceased its large downward movement shortly before Christmas but still doesn’t show much sign of returning to familiar areas above R19. British releases this morning were generally mixed although the most important, balance of trade for November, was very positive at slightly over £4 billion. No significant data came from South Africa last week: most traders of the rand are waiting for the South African Reserve Bank’s decision on rates this Thursday.

The clearest strong resistance here is the 200 simple moving average. The doji occurring as price tested this last Tuesday afternoon GMT seems to confirm this area’s key importance as a barrier to upward movement. On the other hand, there doesn’t seem to be much to support more losses from here. The ranging movement so far this month is pretty consistent with what one would expect ahead of a key monetary policy meeting; high volatility is expected on Thursday.