The biggest news for forex markets this week comes from the UK, Germany and Canada, with key data and events in each of these countries tomorrow, Wednesday and Thursday. Traders will also focus on Japanese data this week, particularly the balance of trade and inflation.

Last week’s events included cuts by the Central Bank of the Republic of Turkey and the South African Reserve Bank to their base rates against expectations. Most of the important data from China, the eurozone and the USA was basically in line with expectations. British balance of trade posted a surplus this time last week.

So far this week the People’s Bank of China has kept its annual loan prime rate on hold at 4.15%. The consensus was for a cut to 4.05%: USD–CNH moved down quite sharply in the early morning GMT but has now recovered these losses. 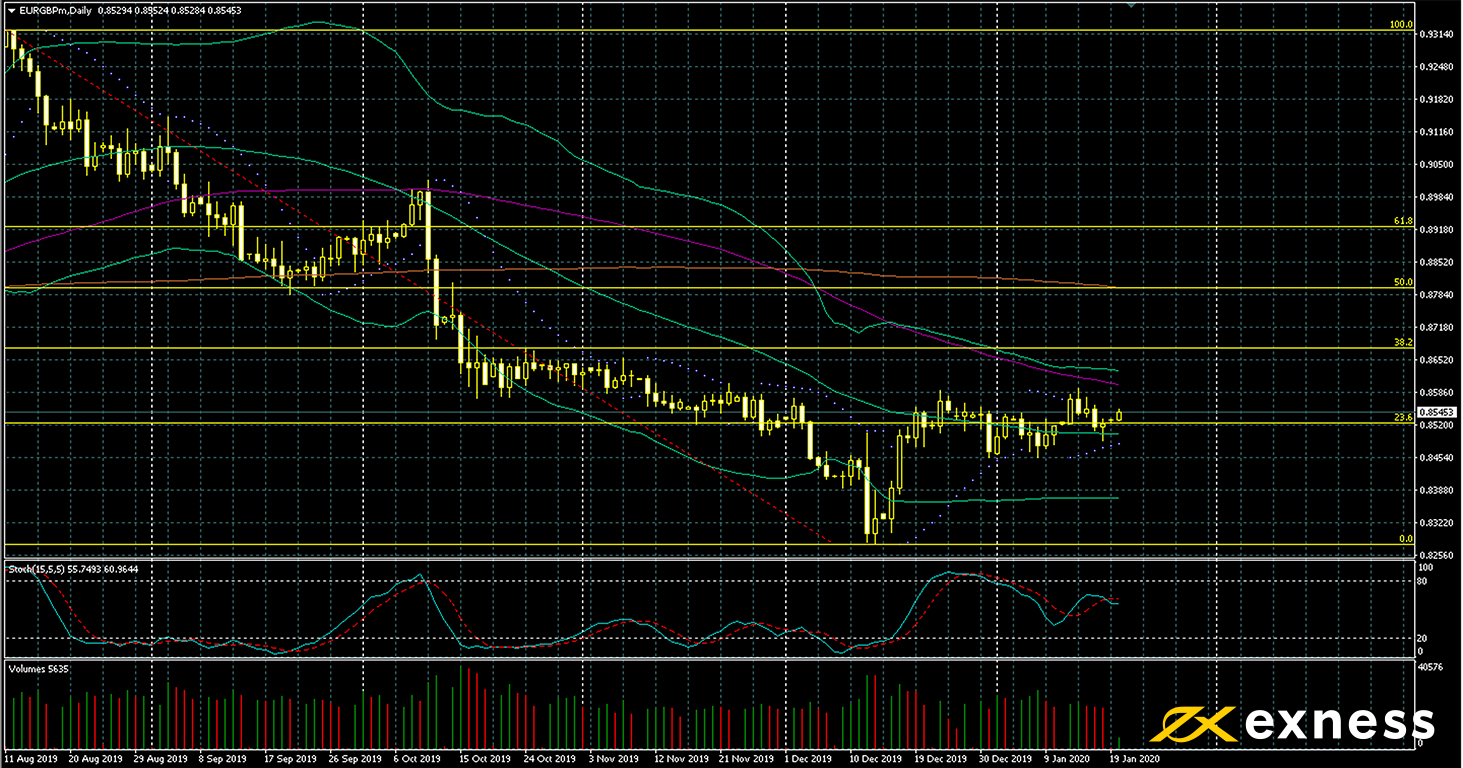 The pound has generally remained quite strong against the euro so far this year compared with familiar areas over the past couple of years. This morning’s 85.4 pence is still close to two-year lows for EUR–GBP. Politics is likely to continue to drive this symbol in the next few weeks as Brexit approaches on 31 January. A major reshuffle of the British cabinet is expected shortly after Brexit; this might mean that a large number of traders will want to wait until February before committing themselves either way.

British inflation and retail sales for December were quite disappointing last week. On the other hand, a trade surplus of more than £4 billion was a surprisingly strong result. Upcoming data should probably be viewed in the context of the increasing likelihood of a cut to the bank rate by the Bank of England next week. Tomorrow morning’s claimant count change and ZEW sentiment are the most important releases for EUR–GBP this week.

Charts overall are still fairly negative for euro-pound on the daily timeframe but downward momentum has dried up. The 50, 100 and 200 SMAs are still successively lower and there is no indication of saturation. On the other hand, volume is down from last week, and we can observe the contraction of Bollinger Bands (50, 0, 2) since December. 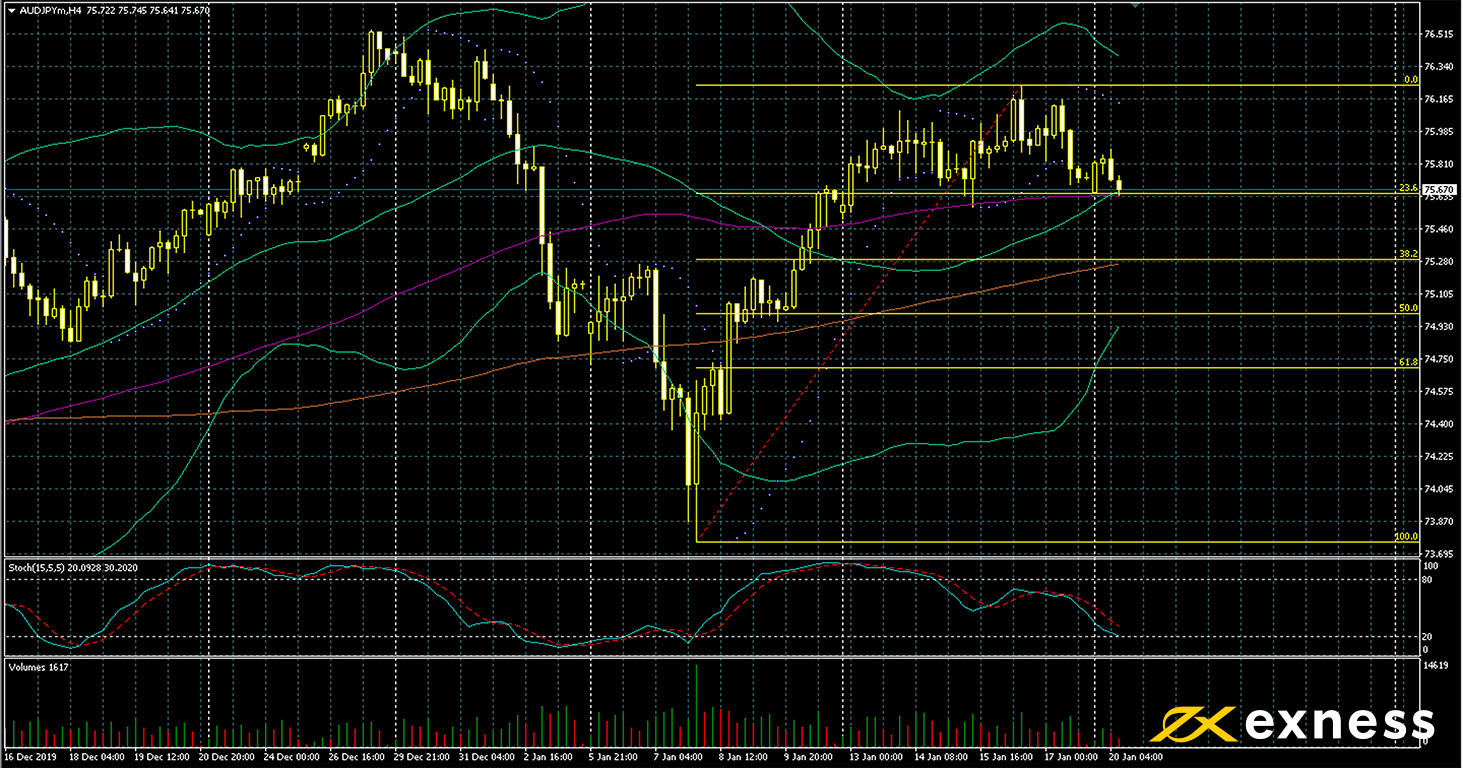 AUD–JPY continued its recovery albeit more slowly last week as fears abated of record-breaking economic damage from the long-raging bushfires. Havens like the yen also generally lost some strength since the middle of the first full week of January as tension between the USA and Iran declined. Events in Libya over the weekend have given some support to the yen, but so far this hasn’t had a major impact on the chart here.

The most important area in the immediate future is likely to be the 23.6% Fibonacci retracement which price is currently testing. This coincides with the 50 and 100 SMAs, so one would expect some strength around here in preventing a more extended retracement downward. The slow stochastic (15, 5, 5) is also approaching the trigger zone for oversold.

Tomorrow morning’s meeting at the Bank of Japan is unlikely to bring much impetus to AUD–JPY in either direction. On the other hand, tomorrow evening’s releases of consumer confidence and change in this from Australia are likely to be very important in setting the tone for the rest of the week. 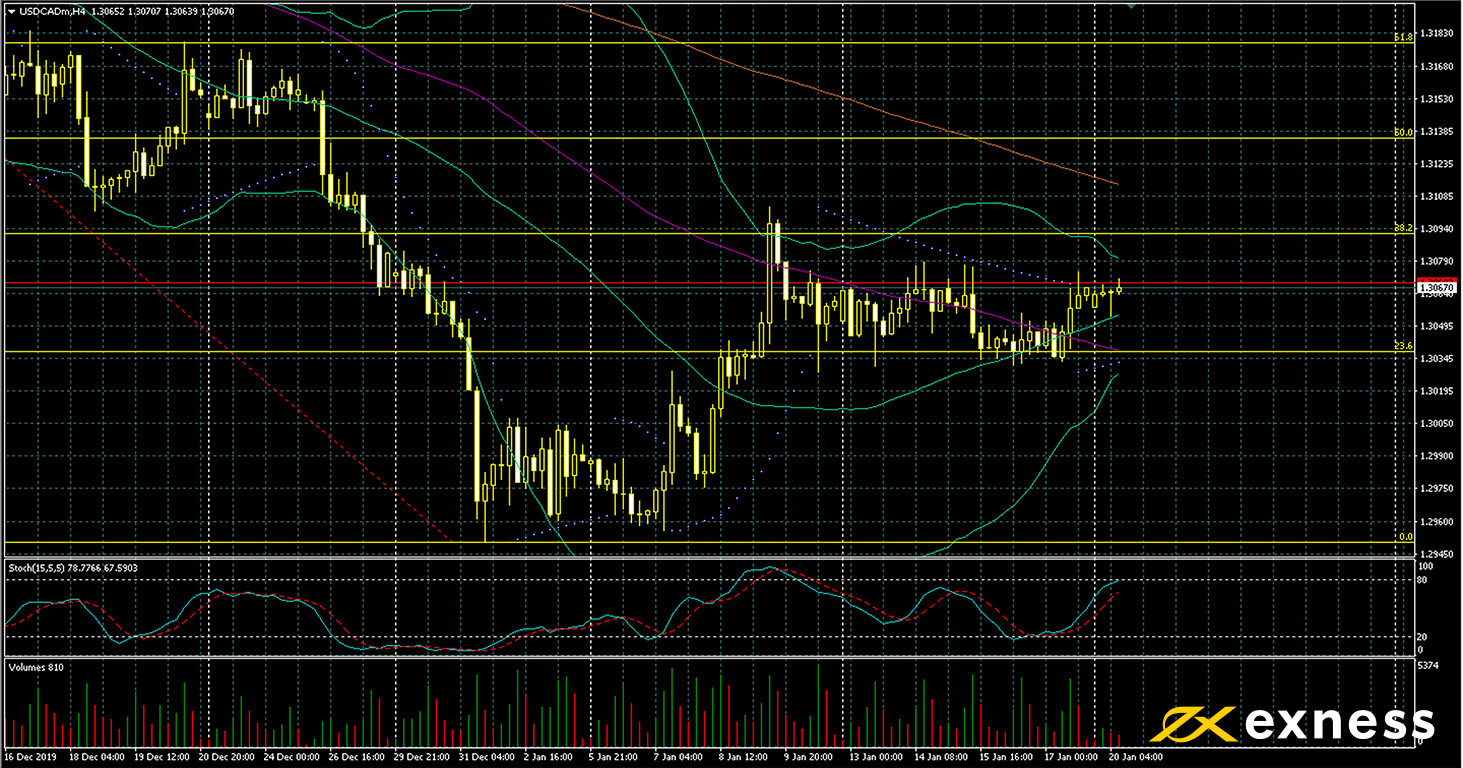 The greenback has generally held on to its recent gains over the past week against its northern counterpart. Data from the USA last week was fairly good on the whole, and crude oil retreated quite sharply from recent highs, especially last Monday and Tuesday. The backdrop for this chart is the fairly consistent theme of pessimism from the Bank of Canada over the past few months contrasted with the Fed’s mostly more positive outlook for the American economy.

As crucial meetings of the two central banks approach, though, momentum and volatility here have been lower in much the same way as for other symbols. Bollinger Bands (50, 0, 2) have contracted significantly since the middle of last week. Meanwhile there was a golden cross of the middle line of Bands and the 100 SMA on Friday morning GMT.

Fibonacci here is based on December’s downward movement on the daily chart. The 38.2% retracement area is likely to provide resistance this week unless the news from the BoC is unexpectedly negative and/or oil suddenly resumes its strong gains. This zone was tested unsuccessfully overnight 8-9 January and it seems likely that it will also coincide with the 200 SMA around the end of this week.