This is a fairly slow week in economic data as expected with Christmas on Wednesday. So far this week we’ve had Thai balance of trade and Polish unemployment for November, neither of which produced much surprise.

The main events are this afternoon, with the USA releasing November’s durable goods orders at 13.30 GMT. Canadian monthly GDP for October is at the same time. The EIA’s regular release of crude stocks is delayed to Friday; nearly all financial markets are closed on Wednesday, Christmas Day.

Some of the biggest news last week from central banks were two changes, in Mexico and Sweden. The Riksbank raised its repo rate by 0.25%, bringing the krona out of negative rates for the first time since February 2015 as widely expected. Also as expected, the Banco de Mexico cut its benchmark rate by 0.25%, taking the BdeM’s main rate to 7.25%. 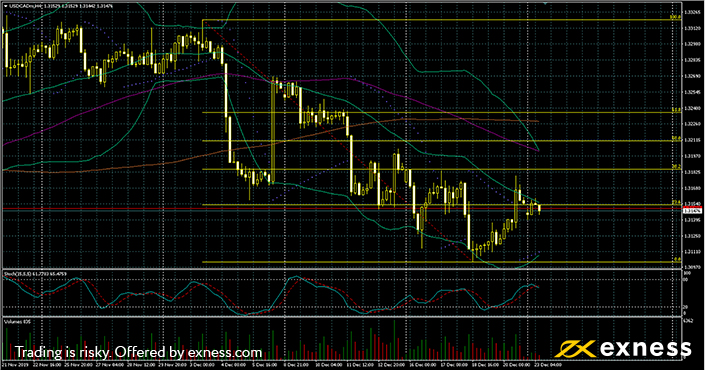 USD–CAD continued its slide last week on the whole as oil continued to move up steadily. Unusually strong inflation in Canada gave some fundamental support to the loonie on Wednesday, but the dollar also had a bit of a boost from decent data ending last week: final GDP growth for the third quarter in the USA inched up by 0.1% from the previous release to 2.1%. November’s growth in personal income in the USA also moved up, this time beating the consensus at 0.5% compared with October’s upwardly revised 0.1%.

Despite the overall losses on this chart, the dollar showed some signs of strength at the end of last week as well as earlier this morning. Price is currently testing the 50 SMA from Bands, the area of which overlaps with the 23.6% Fibonacci retracement. Although the slow stochastic has moved up strongly, at around 62 it’s still reasonably far from overbought. This morning’s downward crossover of the stochastic is unlikely to be a reliable signal given that it happened so far from a zone of saturation.

As elsewhere, it’s unlikely that there’ll be much ongoing direction for this symbol this week. Instead, many traders will be monitoring USD–CAD’s reaction to this afternoon’s data. 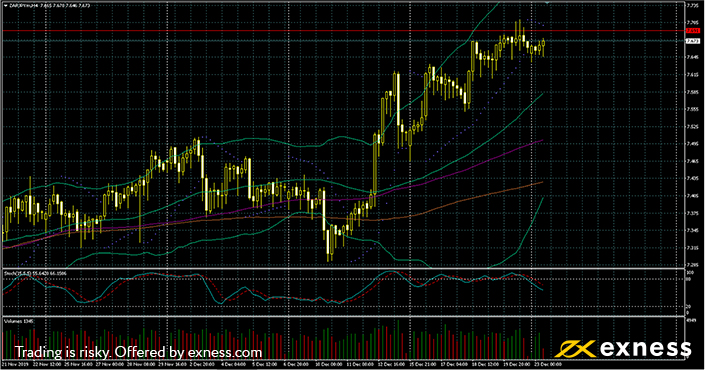 Much like most emerging currencies this month, the rand has maintained considerable strength in most of its pairs. ZAR–JPY in particular reached five-month highs on Friday night GMT. Sentiment on a trade deal seems to be fairly positive and while most shares haven’t really seen a ‘Santa rally’, many stock markets including South Africa’s have outperformed in December so far.

The technical picture strongly suggests that gains are likely to continue. As price has consolidated just shy of quarterly highs, the slow stochastic has retreated from overbought. The gap between the three moving averages here has increased significantly since last week. On the other hand, the rand’s fairly strong correlation with other ‘risk-on’ instruments should be monitored carefully: a sudden panic amid low volumes in equity markets could have a major effect on this symbol. 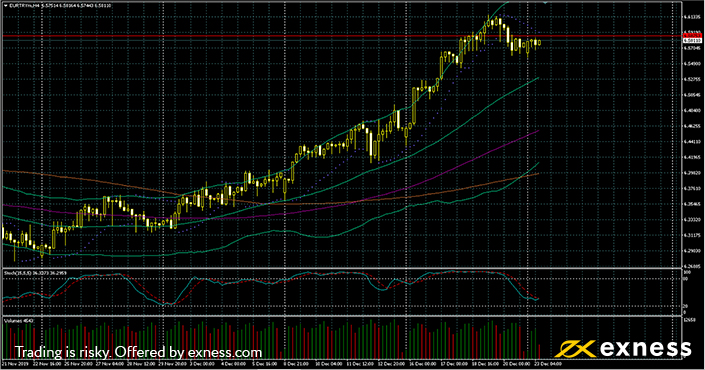 The lira has been the exception among emerging currencies in the fourth quarter of 2019. As the CBRT has cut rates very quickly, EUR–TRY among other pairs has made sustained gains. Turkey’s one-week repo rate now stands at 12% compared with 24% six months ago, with the latest cut of 2% occurring on 12 December. Data on business confidence and capacity utilisation on St Stephen’s Day might give some clues on whether sentiment could turn around again in early 2020.

A strong uptrend is clearly visible on this chart, with price having paused last Thursday night GMT to consolidate. The slow stochastic moved out of overbought just before this. From a technical standpoint, conditions seem to be ideal for the euro to continue making gains against the lira this week.

Thank you for having read the latest news and analysis from Exness Education. We wish you the very best for Christmas and New Year!