The most important events this week for forex markets are the meetings of the Fed and the BoE on Wednesday and Thursday. Other key releases include GDP in the USA and various countries in the eurozone. Exness’ weekly forex data preview takes a look at the charts likely to be affected by these and other crucial events in the economic calendar.

Last week’s most important scheduled event was the meeting of the ECB. The generally cautious outlook from the Executive Board led to some losses for the euro against most major currencies. Despite this, PMIs from Germany on Friday morning were unexpectedly strong. These allowed the common currency to recover somewhat at the end of the week. The pound also had a boost from unusually good service PMI on Friday.

One of the biggest factors behind oil’s slump since last week has been the increasing death toll from the coronavirus in China. The virus has killed at least 80 people so far. Over 400 people remain in critical conditions in hospitals, mostly in Hubei province. Travel around the country is increasingly restricted. Markets meanwhile are concerned about the likely economic impact of the virus. 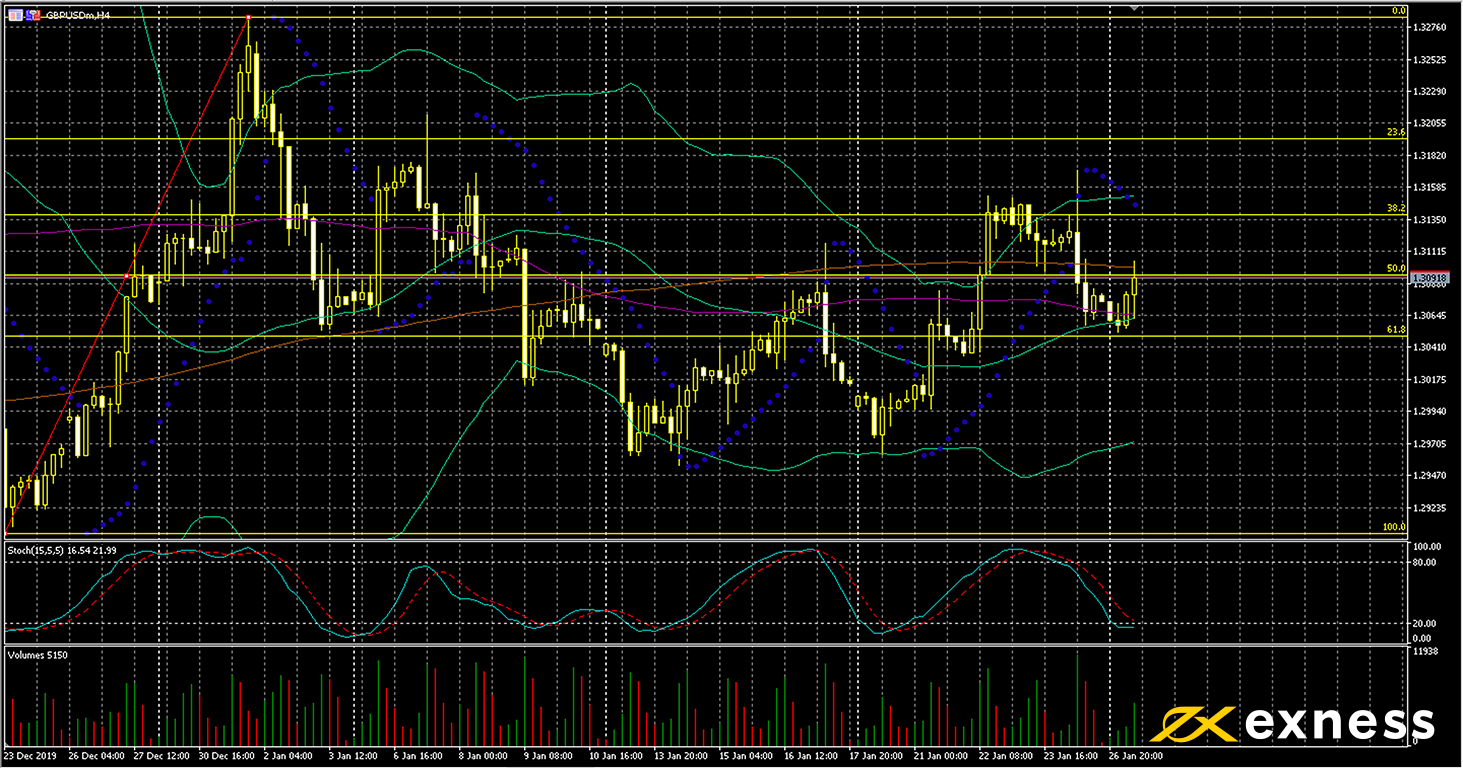 GBP–USD has generally remained quite strong in January so far compared with the average over the past couple of years. $1.30 seems to be an important area of support on the four-hour chart. Flash PMIs from the UK on Friday morning gave the pound considerable fundamental support. Nevertheless, there remain many questions around plans for after Brexit. The most important is whether the government can really negotiate a full trade trade with the EU in just 11 months before the end of the transition period.

Price is currently within the value area between the 100 and 200 SMAs. Generally there hasn’t been much clear direction this month, which makes sense with the confirmed date of Brexit on 31 January at midnight. The meeting of the Bank of England on Thursday at noon GMT is likely to spur the pound one way or the other depending whether the cut to rates materialises. A cut from 0.75% to 0.5% in the bank rate is still the consensus of most analysts. Wednesday evening’s meeting of the Federal Open Market Committee is also likely to bring some volatility for this symbol. 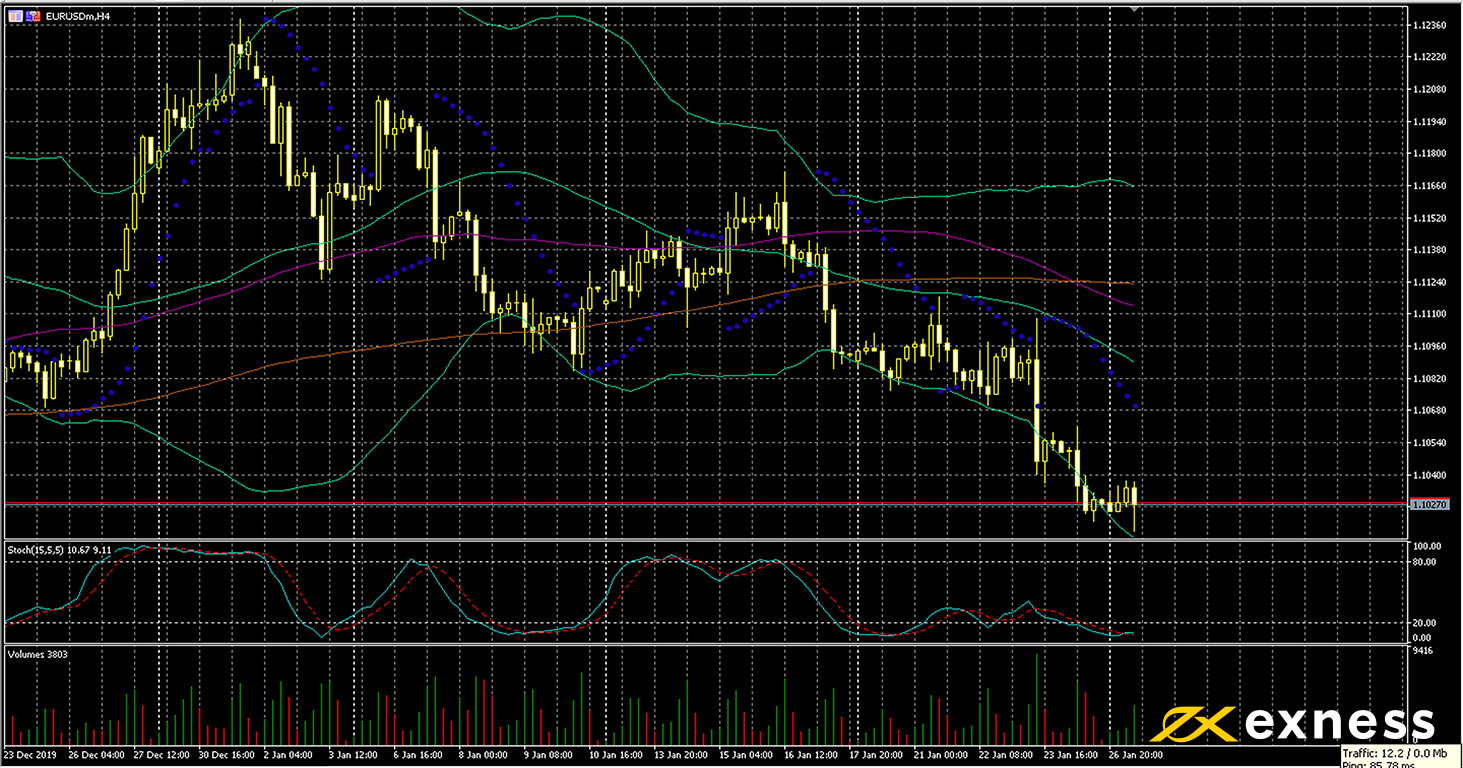 The euro appears to have resumed its downtrend against the dollar in the aftermath of Thursday’s meeting of the European Central Bank. Despite good data last week from Germany, the eurozone’s largest economy, EUR–USD focused on the ECB’s caution. So far this week, the data from Germany is less impressive. Ifo Business Climate for January this morning GMT was somewhat disappointing at 95.9. This is slightly lower than the previous release and more than a whole point lower than the consensus.

From a technical point of view, it’s clear that selling saturation is in focus on this chart. There’s still plenty of room for EUR–USD to fall further, though. Both the 50 and 100 SMAs death crossed the slower 200-period moving average last week and selling volume increased somewhat. Another big movement downward this week is not favourable unless the news from the Fed on Wednesday night is very negative. 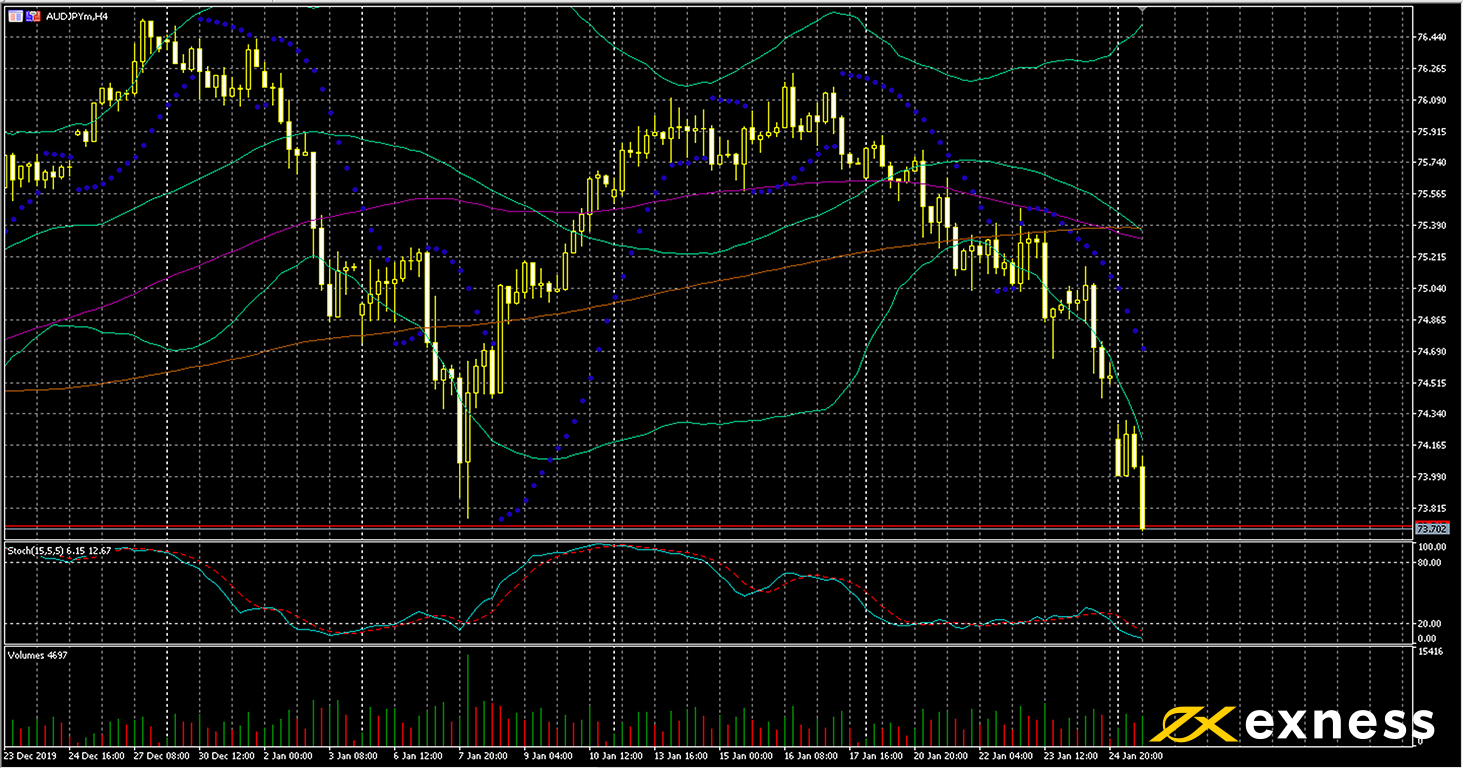 The Aussie dollar has resumed its losses against the yen in earnest since last week. Despite gains for many Australian shares last week, general gloom prevails. Talk of printing money, weak growth, households not spending and so on has had a significant negative impact on AUD. The yen, though, one of the most important havens, has mostly made gains. These came as fears spread over the effect of the coronavirus on China and the outlook for growth generally. Westpac Consumer Confidence in Australia was also down last Tuesday night to 93.4.

This symbol is one of the most strongly oversold so far this week. This is likely to be the fourth successive four-hour candle to close outside Bands (50, 0, 2). The slow stochastic (15, 5, 5) also displays clear selling saturation; the main line reads less than 7 at the time of writing. Selling in here would be very risky. Many traders will be waiting for the next meeting of the RBA on 4 February before committing themselves. This week’s data might still be important, particularly business confidence from Australia early tomorrow morning.