This week’s trading saw considerable volatility for many instruments as both the European Central Bank and the Bank of Canada met. Meanwhile sentiment on various instruments has been affected by the outbreak of the coronavirus in China. Exness’ weekly market roundup looks at these and other events with reference to some of the week’s most important charts.

The dollar generally made some gains in most of its pairs with the notable exception of cable. Havens also had a boost from the uncertainty caused by events in China over the last few days. So far 26 people have been killed; over 33 million people are under lockdown in the country as of this morning GMT. there’s likely to be a significant effect on the economy from the virus. Major benchmarks for crude oil reacted with large losses.

Meetings of the BoC on Wednesday and the ECB yesterday resulted in losses for the Canadian dollar and the euro against the US dollar. In both cases, the outlook from central bankers was somewhat negative, though perhaps more so from the BoC.

Today’s major data so far has seen Japanese annual inflation up to 0.8%, the highest since April. The pound also had a big boost this morning from surprisingly good manufacturing and service PMIs in the UK. Both of these beat expectations at 49.8 and 52.9 respectively. German PMIs were also a lot better than the consensus at 8.30 GMT this morning. Manufacturing in Germany recovered somewhat to 45.2 and services expanded at 54.2. 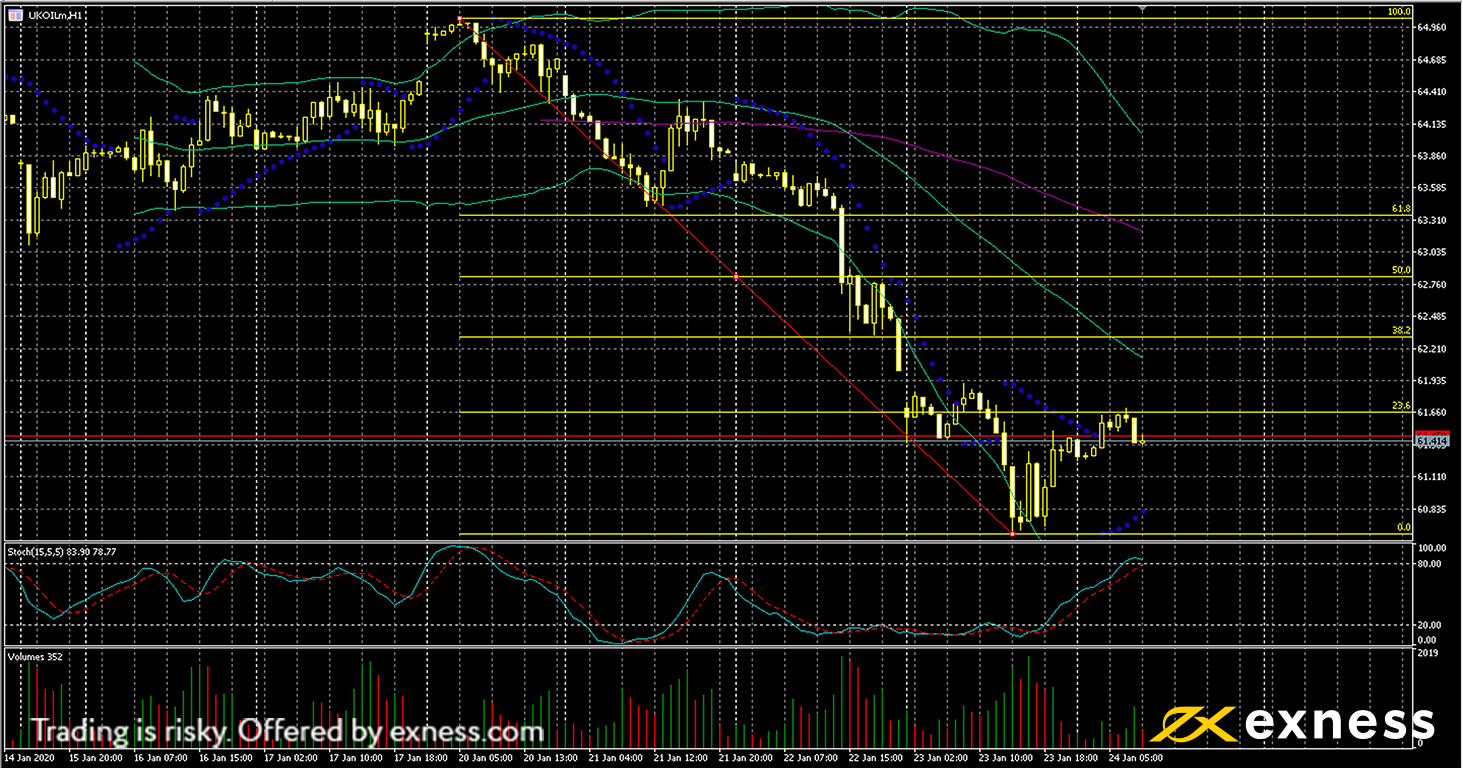 Both the British and American benchmarks for crude have taken big hits this week. Markets have been considering the likely impact on demand due to the coronavirus in China. Sentiment on crude has generally been much weaker since the decline in tension between the USA and Iran at the start of the month.

The technical situation on the hourlies here is clearly very negative. However, the question remains whether price can continue to push down in the near future. A classic upward crossover of the slow stochastic (15, 5, 5) yesterday morning came before a fairly enthusiastic retracement to the 23.6% Fibonacci area. Volume has also gone down significantly in today’s session so far. It’s possible that tonight’s data on rigs from Baker Hughes might provide some impetus lower. 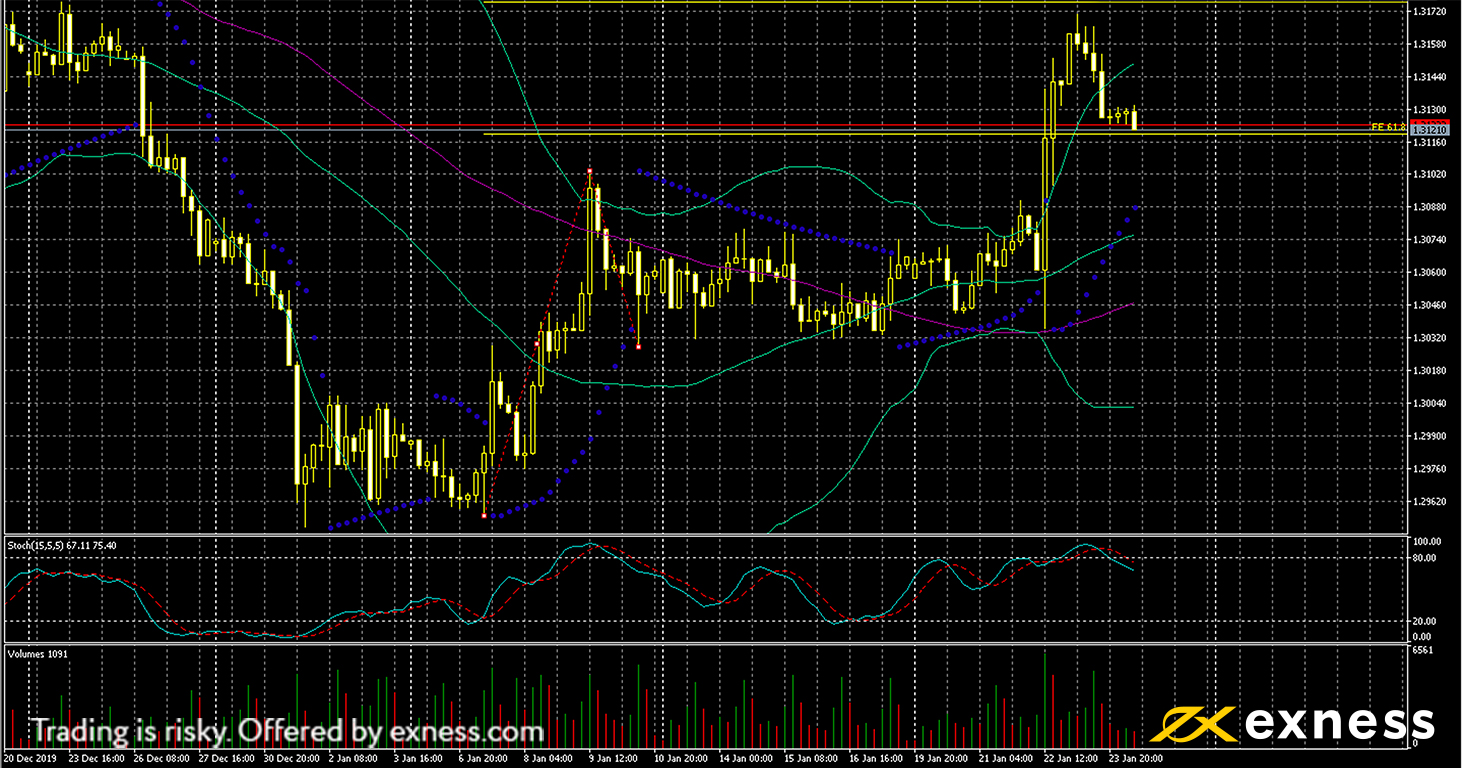 The greenback continued to post gains against its northern counterpart this week. The outlook from the Bank of Canada was fairly negative on Wednesday. Canadian annual inflation remained on target this week although annual core inflation for December was down to 1.7%. American data this week has been reasonably strong: initial jobless claims for 18 Jan released yesterday indicated a gain of 211,000. The previous figure was also revised upward.

Movement was very quick on Wednesday as price surged through the bulls’ initial target around the 61.8% Fibonacci extension area. Buying volume also spiked in the immediate aftermath of the BoC’s announcement. One should also note that despite clear buying saturation on Wednesday night GMT, the angle of the latest consolidation is obtuse.

This symbol appears to be setting itself up for continuation upward. Saturation no longer predominates and the current consolidation is above both the 61.8% Fibo extension and the 200 SMA. Data on retail sales from Canada at 13.30 GMT today might cause further volatility. 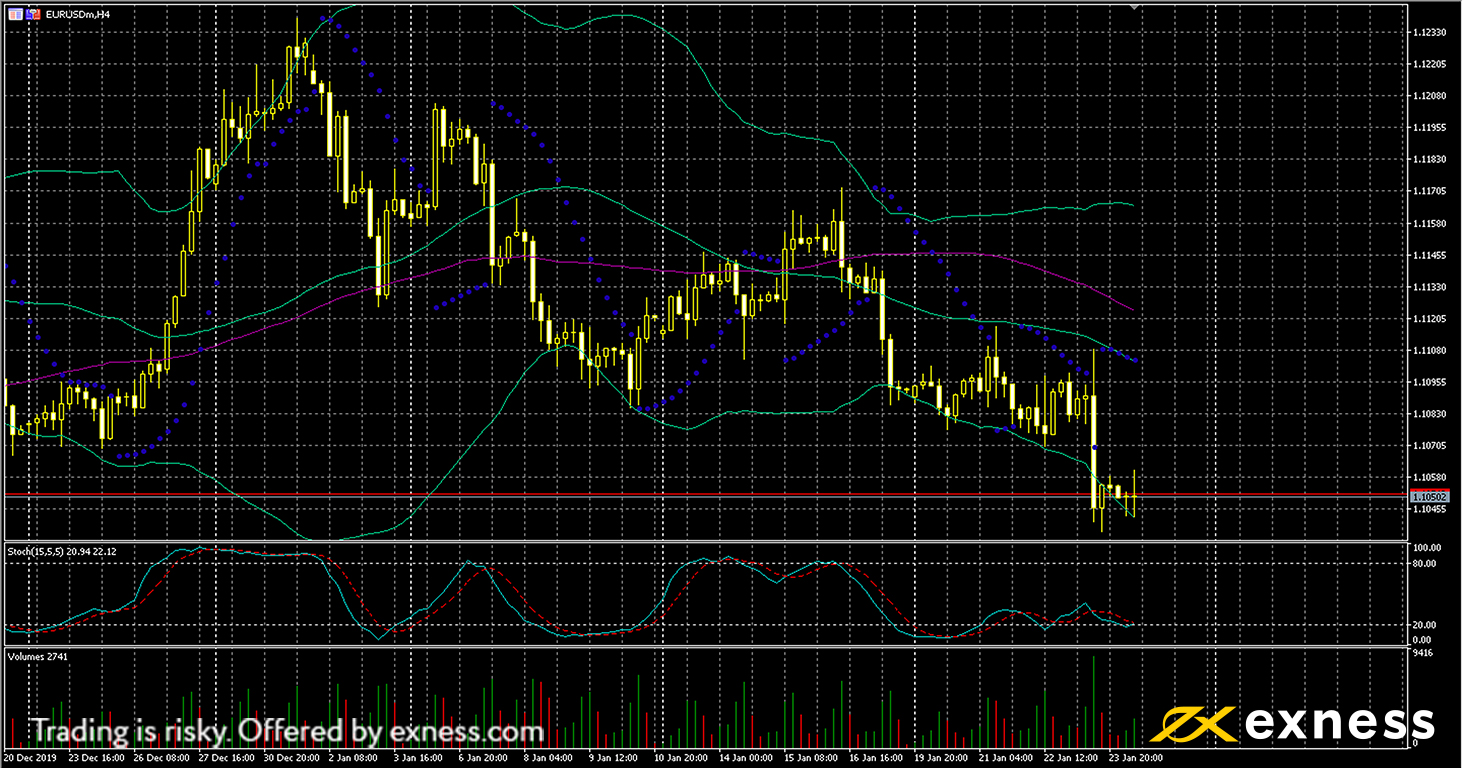 EUR–USD has mostly behaved as expected in the aftermath of a fairly negative meeting of the ECB. On the other hand, this morning’s data from Germany was unexpectedly positive. French PMIs were also reasonable. Nonetheless, the dollar received a boost from a relatively strong ADP release this week. Overall, the ECB’s cautious message has been the key fundamental factor this week driving the euro somewhat lower.

The technical picture is pretty negative here but saturation has dominated since yesterday afternoon. The main line of the slow stochastic has moved back into oversold, and we can see two closes in oversold based on Bollinger Bands (50, 0, 2) yesterday. It looks as though the 100 SMA is about to death cross the slower 200-period moving average. Volume meanwhile has declined as expected since yesterday’s news.

In general, more losses seem likely for the euro next week, but most sellers will probably wait for a retracement of some sort instead of entering here. The very strong psychological support of $1.10 is also likely to be a crucial area next week unless Monday morning’s Ifo Business Climate comes in notably better than expected.