The main events so far today in forex markets were the release of significantly weaker data on GDP growth from some of the eurozone’s major economies. This data comes in the context of the coronavirus and its likely economic impact being the crucial news for markets for most of the week. Exness’ weekly market roundup looks at these and other important goings-on with reference to some of the popular charts of the week.

The death toll from the coronavirus has now reached at least 213 around the world. The World Health Organization has declared the outbreak a global emergency. ‘Risk-on’ instruments like the Oceanic dollars, oil and various others have reacted negatively, while havens like the yen and gold have continued to post gains in most of their pairs.

Despite the virus having been front and centre in the news this week, many instruments have also been affected quite strongly by regular news and data. One of the most important events this week was the Bank of England’s decision yesterday to leave its rate on hold at 0.75%. Expectations were split pretty much down the middle on this in the runup to the bank’s meeting. As it happened, cable gained significantly yesterday afternoon. 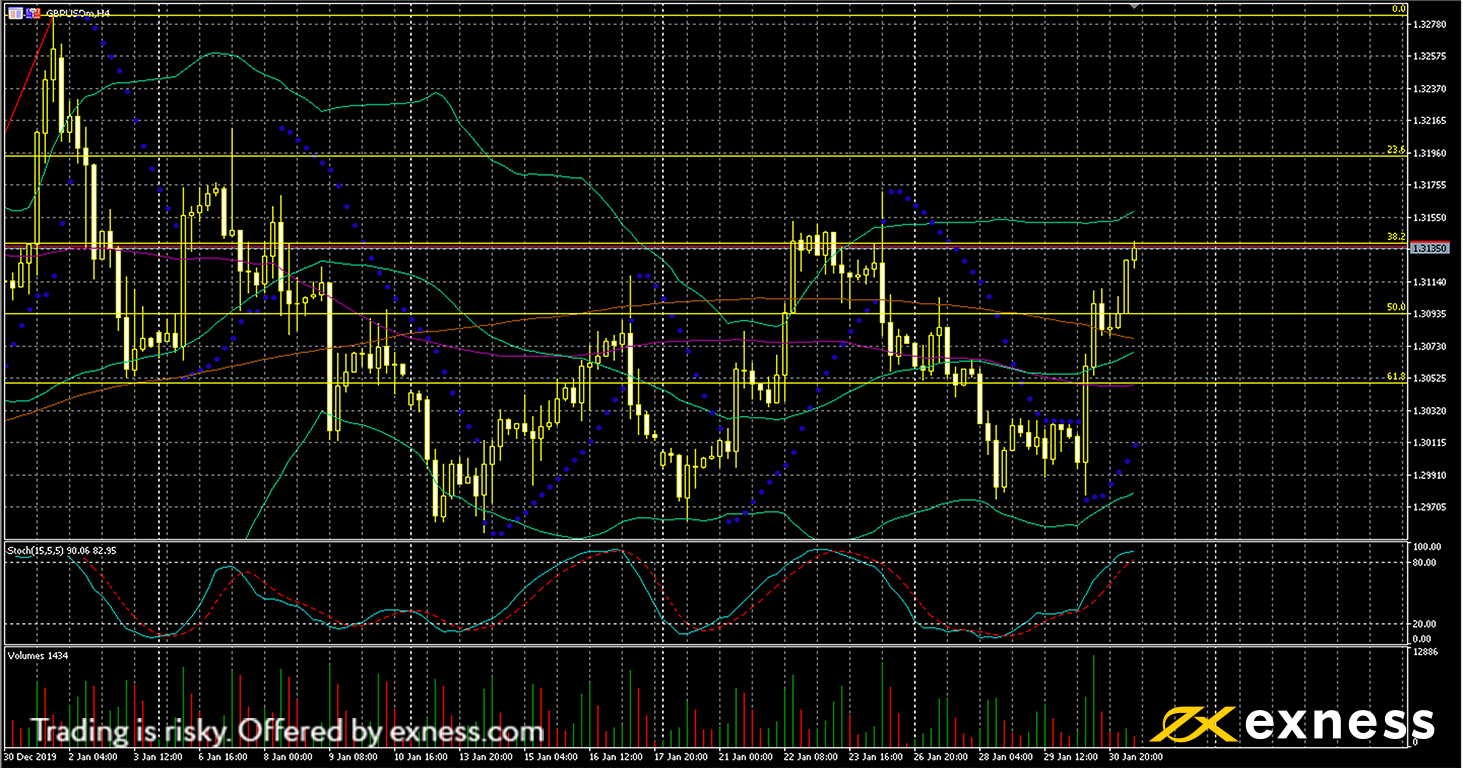 Cable moved up from the lower end of its recent range in the aftermath of the Bank of England’s meeting. The bank left its base rate on hold at 0.75% in the last meeting under the tenure of Governor Mark Carney. While the reaction was very positive for GBP–USD, incoming governor Andrew Bailey might have a hard time justifying the bank rate at this level when he takes office in March.

Fibonacci retracement areas based on the pound’s gains just before Christmas remain important on this chart. We can observe that the 38.2% retracement still appears to be a zone of resistance. The slow stochastic (15, 5, 5) has moved into overbought as of this morning GMT and buying volume has declined significantly. Based on both fundamentals and TA, then, an extension of the pound’s recent gains is unfavourable in the immediate future.

It’s possible that the pound might see a slightly greater weekend gap than usual due to Brexit tonight. However, it’s more likely that direction will become clearer with the release of final manufacturing PMI on Monday at 9.30 GMT. 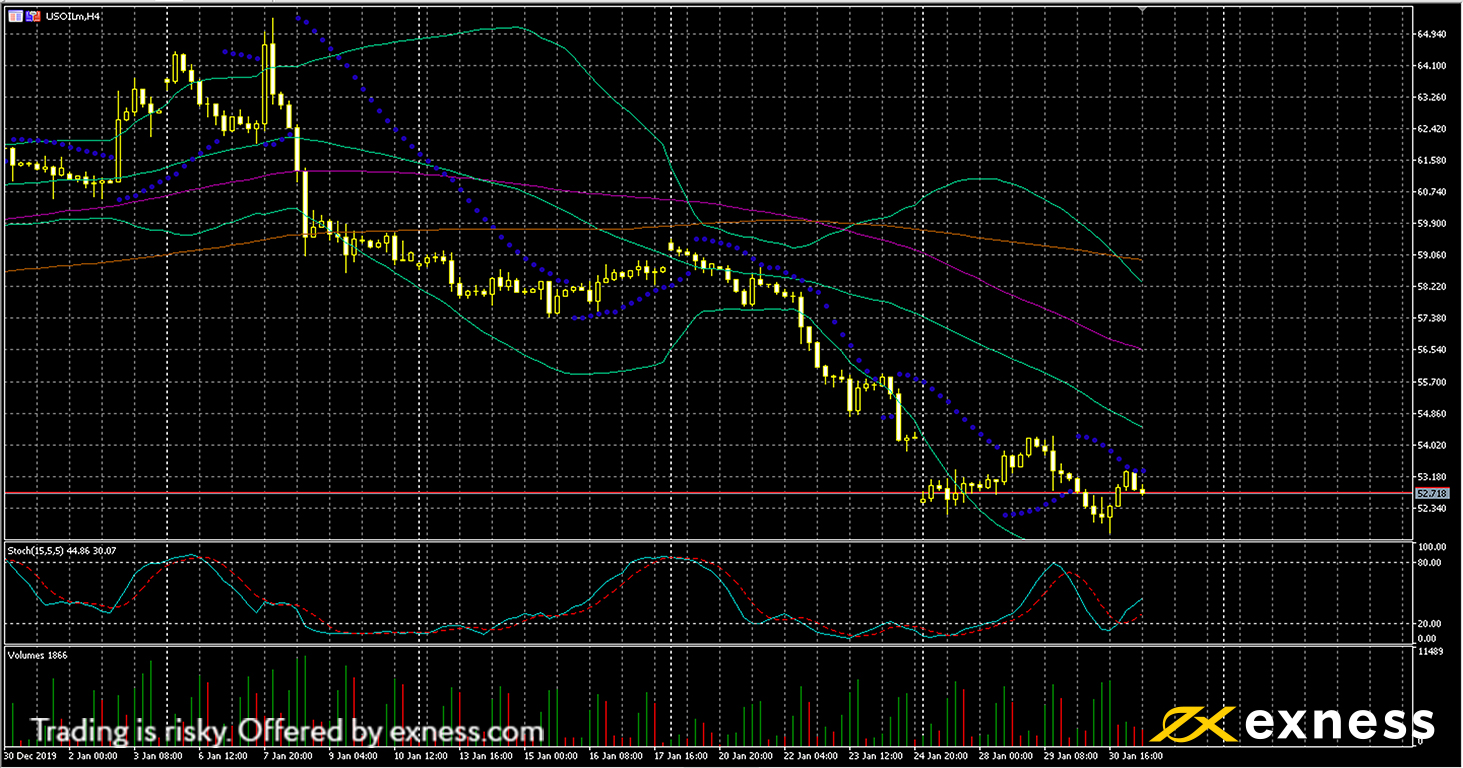 USOIL has continued to make some losses this week, even testing new lows yesterday. The outlook for Chinese demand has been looking progressively worse. Reports from Reuters that energy ministers from Algeria and other OPEC nations want to bring the cartel’s next meeting forward to next month haven’t done much to improve sentiment. The USA also posted an unexpectedly large increase in stocks on Wednesday night.

The technical picture here is certainly quite negative but we should compare last week’s sharp losses amid panic with the less dramatic movements so far this week. Price bounced fairly sharply from new lows below $52 last night with an upward crossover of the slow stochastic. Selling volume has also decreased since the middle of the week. Big declines in price are unlikely to continue forever, and it seems that many sellers have realised the risks of continuing to sell in under these conditions. 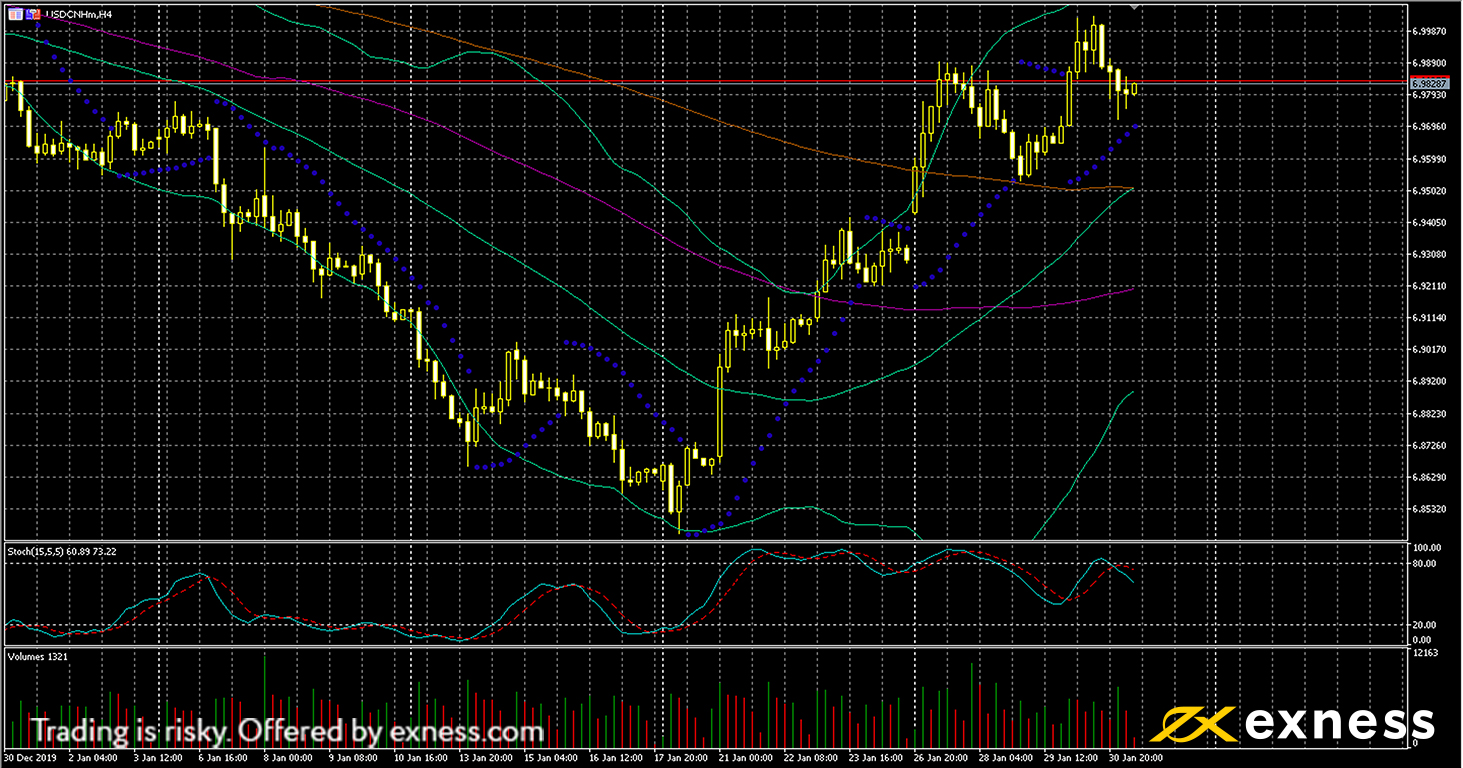 USD–CNH has continued its gains this week amid somewhat higher volatility and some attempts at correcting. While data from China has perhaps obviously been overlooked amid the coronavirus, PMIs this morning were fairly good, with non-manufacturing PMI from China beating expectations slightly at 54.1. American releases this week were pretty decent as well, though, and the Fed’s meeting didn’t bring markets any surprises. Sentiment on this symbol is generally positive because of the first stage trade deal between China and the USA agreed earlier in the month.

The impending golden cross of the 50-period SMA from Bands over the 200 SMA will be the second such event this week. The first in the wee hours of Wednesday morning appears to have presaged the resumption of gains later that day and yesterday. Of course, ¥7 exactly is a critically important area of psychological resistance. Consolidation for a few more days before a retest of this figure seems to be likely. If dollar-yuan does break through 7, though, there seems to be plenty of space for further gains. 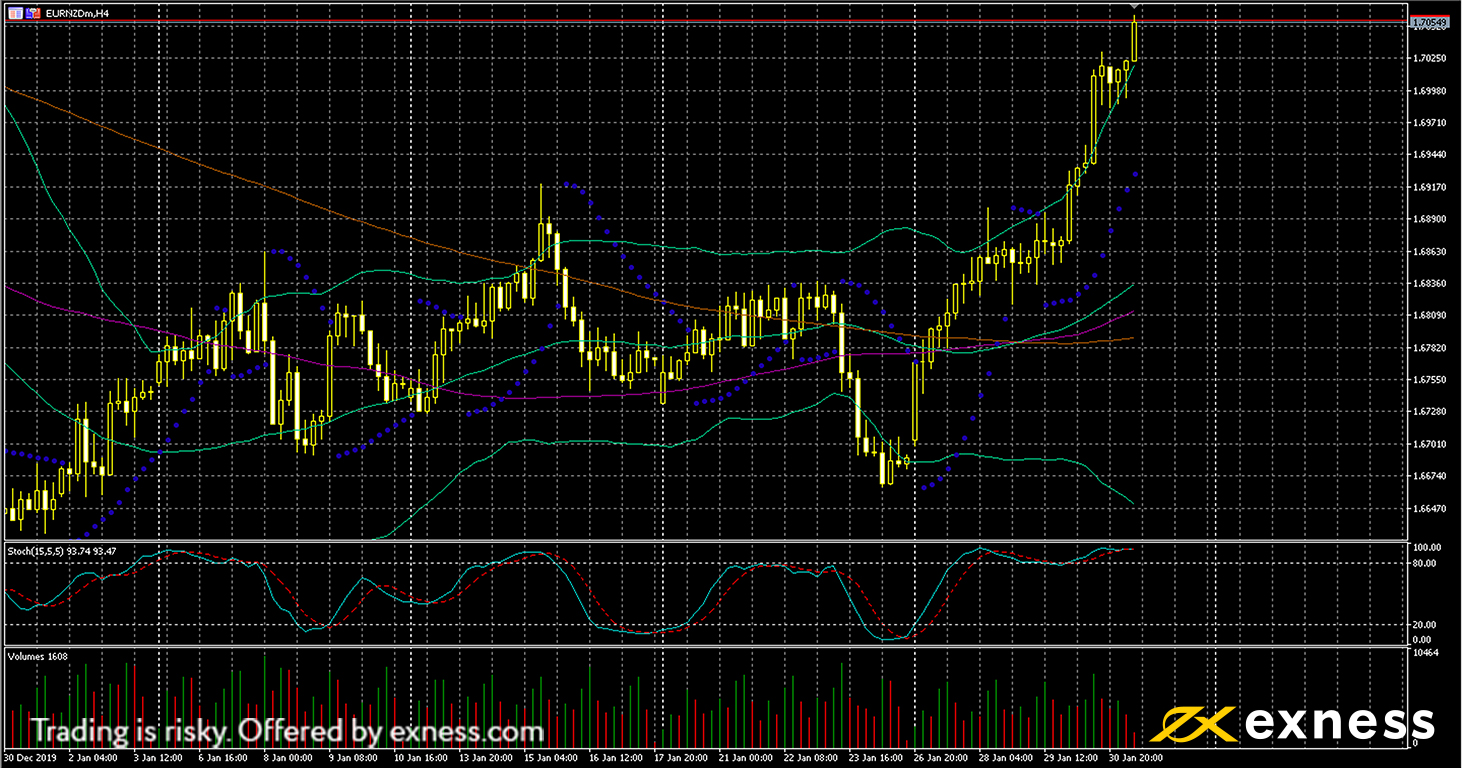 Despite reasonably good data from New Zealand, EUR–NZD has been one of the biggest upward movers this week. The Kiwi dollar like its counterpart across the Ditch is one of the most sensitive currencies to negative sentiment in markets because of New Zealand’s close trade relationship with China.

The biggest regular news in markets so far today is the decline of GDP growth in France and Italy. Preliminary quarterly growth in both countries was negative despite expectations for 0.2% and 0.1% respectively. Weaker growth in the eurozone’s second and third economies has damaged sentiment on the euro in some pairs, but clearly not for EUR–NZD.

One could be forgiven for thinking ‘surely this has to correct eventually!’. It does, but when this might happen is uncertain: panic has dominated here as for some other symbols this week. EUR–NZD also hit a bottom just before Christmas, so it’s possible that the current ‘value area’ between the usual three MAs on the daily charts might be important next week. Buying in here amid such clear overbought signals would be a big risk.

Thank you for reading Exness’ weekly market roundup. Join us again on Monday of a preview of next week’s key data!