The pound has lost strength against most major currencies in the second half of this week. Among the key factors today are the record amount of borrowing by the British government in May. On the other hand, the Bank of England left rates on hold at 0.1% yesterday and retail sales this morning showed a fairly strong recovery from last month’s very weak figures. Today’s weekly pound roundup takes a closer look at the charts of GBPUSD and EURGBP; a big thank you to Nicholas Mugagga who requested these symbols on Facebook!

The MPC voted unanimously yesterday to leave the bank rate on hold at its record low of 0.1%. Meanwhile only the BoE’s chief economist Andy Haldane opposed the decision to increase quantitative easing. The press conference following the announcements revealed that the British economy might contract somewhat less than originally feared this year. Governor Andrew Bailey told reporters that partial lifting of measures against covid-19 might help the economy in the coming weeks.

Deputy Governor Ben Broadbent added that the economic contraction in the first half of 2020 might be only 20% instead of the 27% that had been expected last month. Regardless, this would still leave the UK on track this year for the worst recession in its 313-year history.

Data released this morning meanwhile indicated that British public debt is now larger than the country’s economy for the first time since 1963. The government borrowed around £55 billion in May, the highest monthly figure since comparable records began in 1993. This means that the UK has now joined Italy, Japan, the USA and other countries with debt more than 100% of GDP. 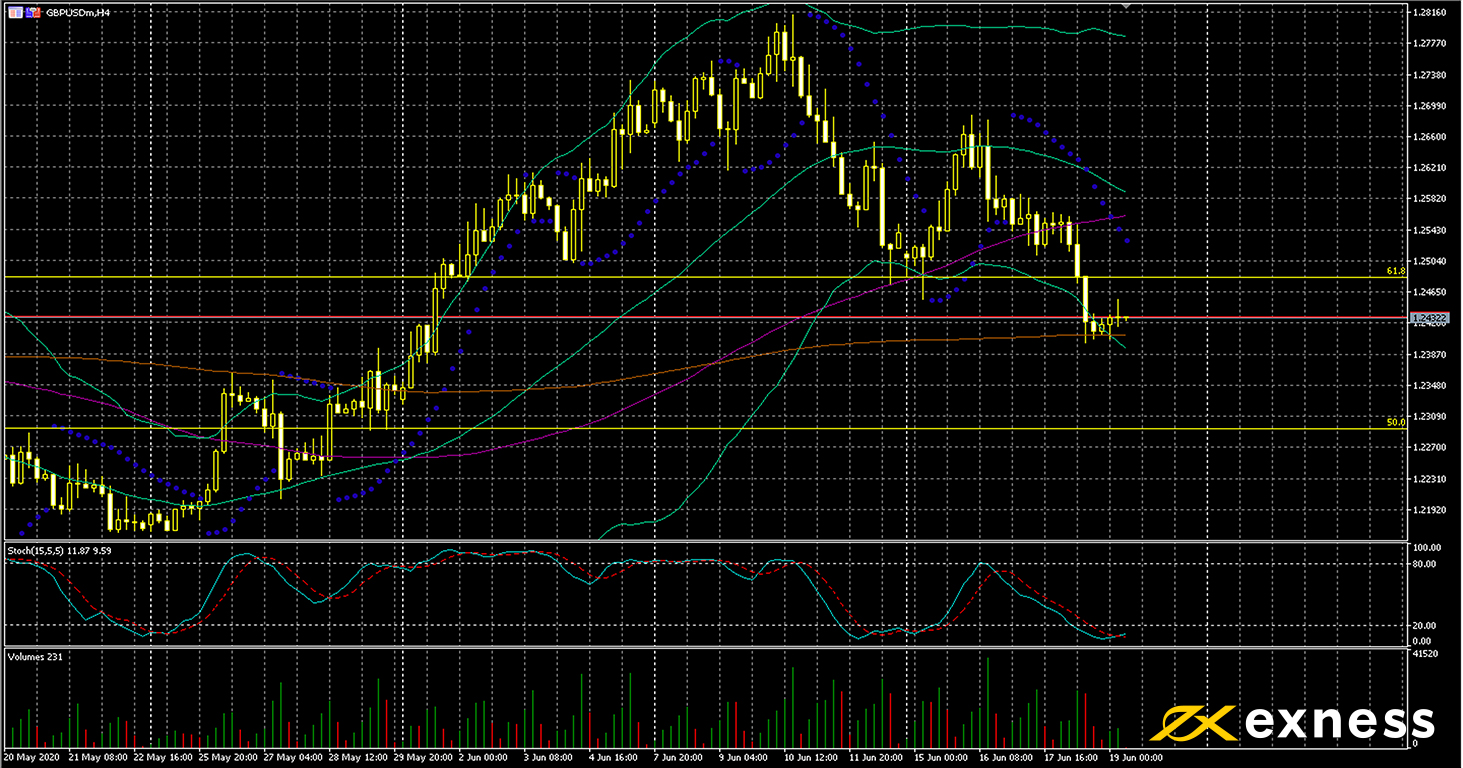 Cable has retreated since last week from the key resistance around $1.28. Click on the image to magnify. The current downward movement appears to have some strength given its penetration below both the 100 SMA and the 61.8% Fibonacci retracement area (based on the daily chart). There has been a pause since yesterday afternoon GMT as price has tested the 200 SMA, which appears to be a strong zone of support.

Within the context of clear oversold conditions based on the slow stochastic, a bounce might be expected within the next few periods. Buying volume remained fairly high in the first half of the week. However, volume in general has decreased since Tuesday, so consolidation around the current area also seems to be a distinct possibility. In such a situation, traders would probably focus on short-term positions in either direction as has been the case for many other major instruments this week.

The first quarter’s current account from the USA is due this afternoon at 12.30 GMT. This release probably won’t have much effect on cable unless the result is notably surprising. The next key release is durable goods on Thursday 25 June. 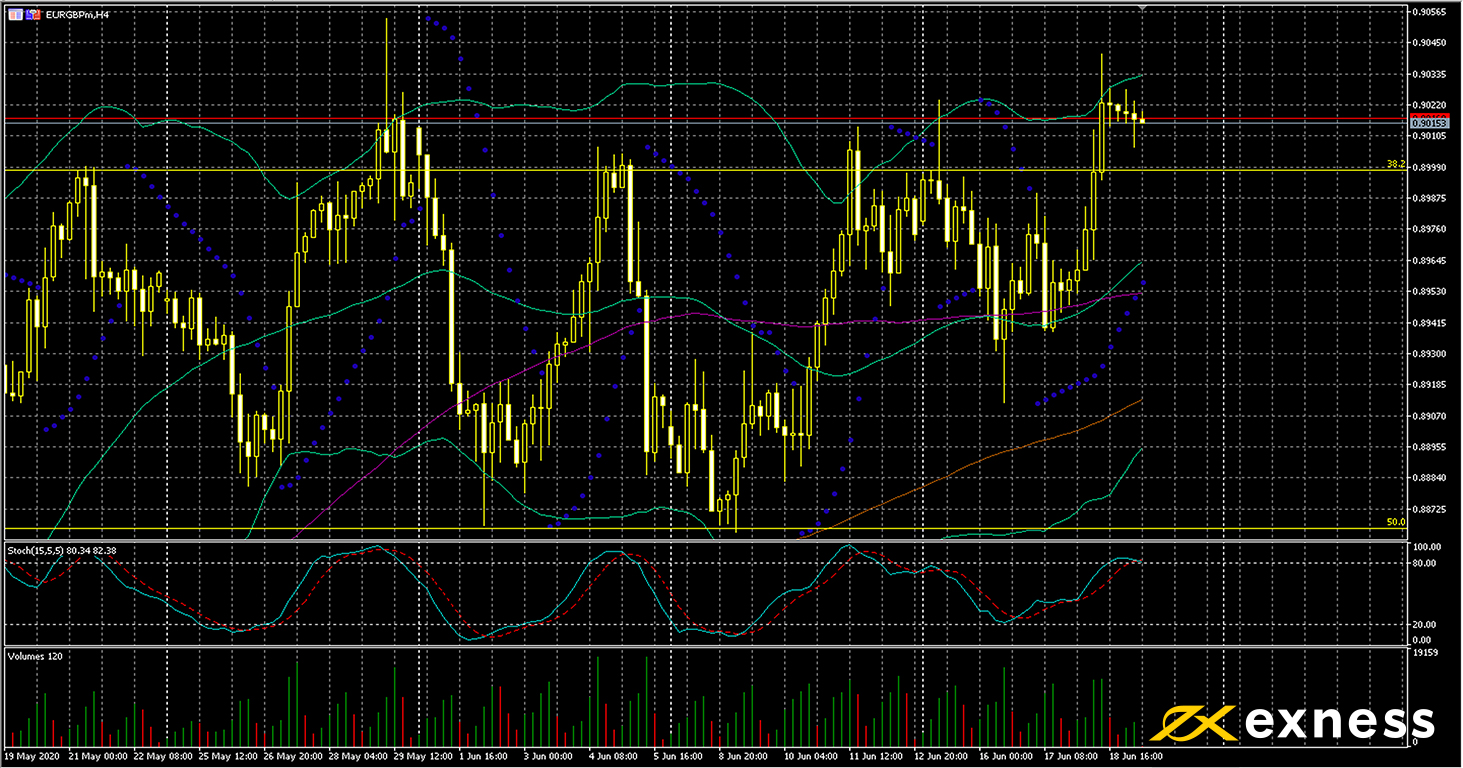 EURGBP has been moving within a fairly clear channel over the last fortnight or so. Click on the image to magnify. Within the larger context of the daily chart, though, this appears to be a consolidation higher in the aftermath of overextension during March’s panic.

Moving averages print a clear buy signal here with each of the 50, 100 and 200 SMAs successively above the others. The 50 SMA from Bands has also completed a golden cross of the 100 this week. This seems like a risky area to buy in though given overbought from the slow stochastic and the proximity of the upper limit of the channel around 90.5p.

Based on TA alone, one possible scenario is a slight pullback over the next few periods to the 38.2% Fibonacci retracement area. From this zone, traders might aim to exploit a new upward wave; if this moved clearly beyond the primary resistance at the moment (90.5p), the next area of importance would probably be the 23.6% Fibo at around 91.5p.

On the other hand, fundamentals next week have significantly more potential to affect this chart than that of cable. Tuesday features several flash PMI releases, firstly from France, then Germany, the eurozone generally and the UK. Wednesday’s Ifo business climate and Thursday’s GfK consumer confidence from Germany are both potentially crucial figures for EURGBP. Traders will also be watching news of ongoing British-EU trade negotiations closely.

Thank you for reading Exness Education’s weekly pound roundup! We’d also like to say thanks to Nicholas who requested cable and EURGBP on Facebook. Join us again next week for more insights into the latest movements in markets plus key upcoming data.