The pound sterling lost strength against most currencies this week. This came as a result mainly of significant deterioration in economic outlooks for the current quarter in the UK and ongoing negative effects of covid-19. This weekly roundup looks at the pound’s fundamentals in general as well as analysing cable and GBP–CAD. Our thanks to Faithful Reginald MaC’opole and Nicholas Mugagga for having commented on Facebook requesting these symbols!

The UK now has the second worst outbreak of covid-19 after the USA in terms of absolute number of deaths, and the government is currently facing a struggle to regain the public’s trust after intense criticism of messaging this week. Recent economic data from the UK have been bleak but not always as bad as expected; March’s claimant count change was only 12,200 compared with expectations up to 200,000. That said, the worst is probably yet to come in terms of economic indicators.

Yesterday’s meeting of the Bank of England saw the MPC paint a truly grim picture for Britain’s economy over the next few months. The Bank expects a contraction in GDP of up to 14% this year, in other words the worst recession since the foundation of the United Kingdom in 1707, and a doubling of unemployment.

Incremental relaxation of the UK’s lockdown is expected to begin next week, but economic recovery probably won’t start until next year at the earliest according to the BoE. Many other countries also face desperate situations, but the uniqueness of current British problems is the government’s stubbornness on pushing Brexit through as originally planned at the end of the year. 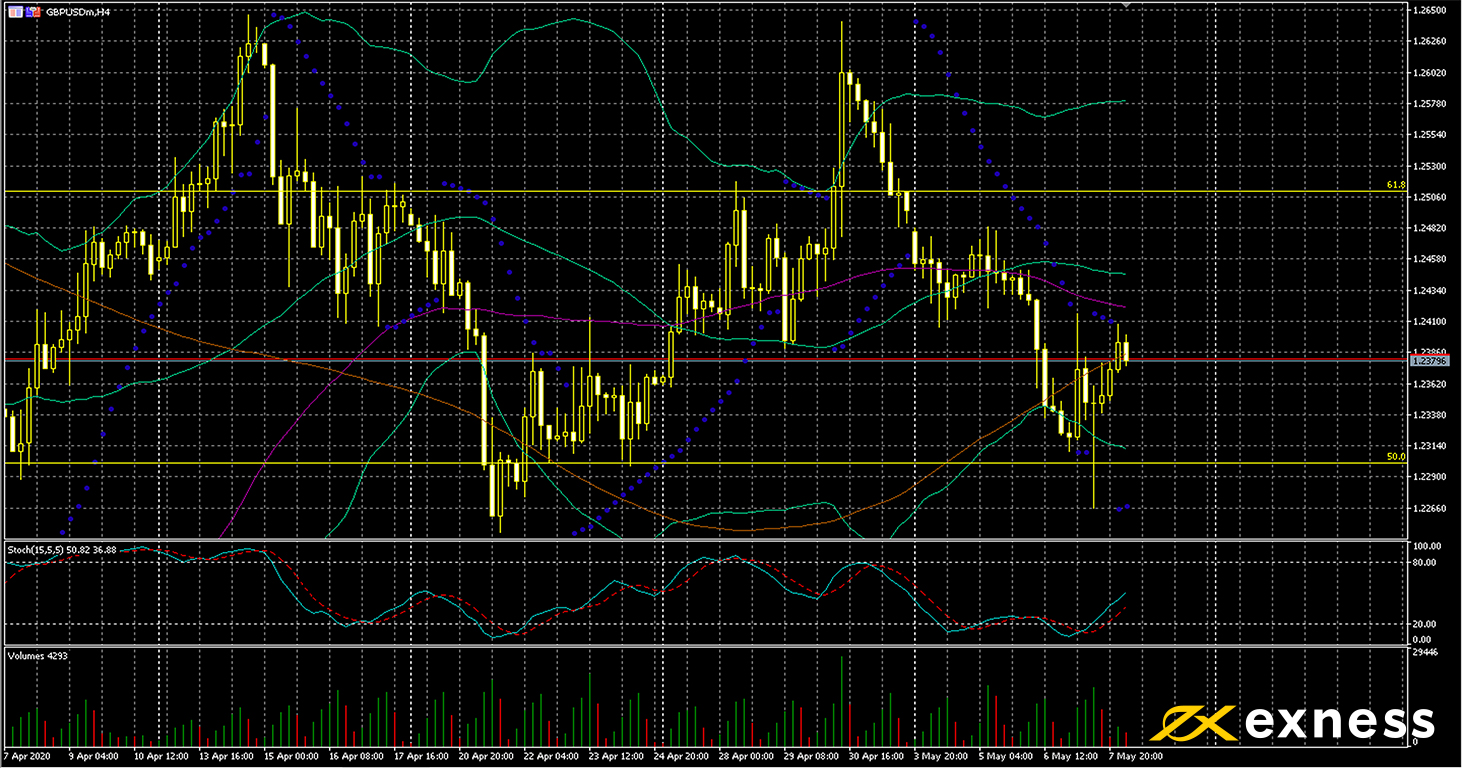 The pound has been basically rangebound against the dollar since the end of March, with few concerted attempts to move above $1.26 or below $1.23. Click on the image to magnify. From a technical point of view, price being currently within the lower end of the range would seem to favour gains for the pound here over the next few days. On the other hand, traders must remember that this afternoon’s non-farm payrolls will probably bring exceptionally high volatility for every symbol with the dollar.

Expectations for the NFP are now around negative 22,000, so if this is accurate or the final release is worse, one would expect gains here, possibly with a retest of the 61.8% Fibonacci retracement area next week. The signal from volumes at the moment is buy; the caveat though is that a large amount of the volume now will probably be short-term orders.

The slow stochastic at around 57 is very close to neutral. Meanwhile generally smaller candlesticks – wicks and tails as well as real bodies – over the last few periods are consistent with many traders’ patience before the big release. For those who don’t focus on the very short term, waiting for the dust to settle after this afternoon’s American employment data would probably be sensible. 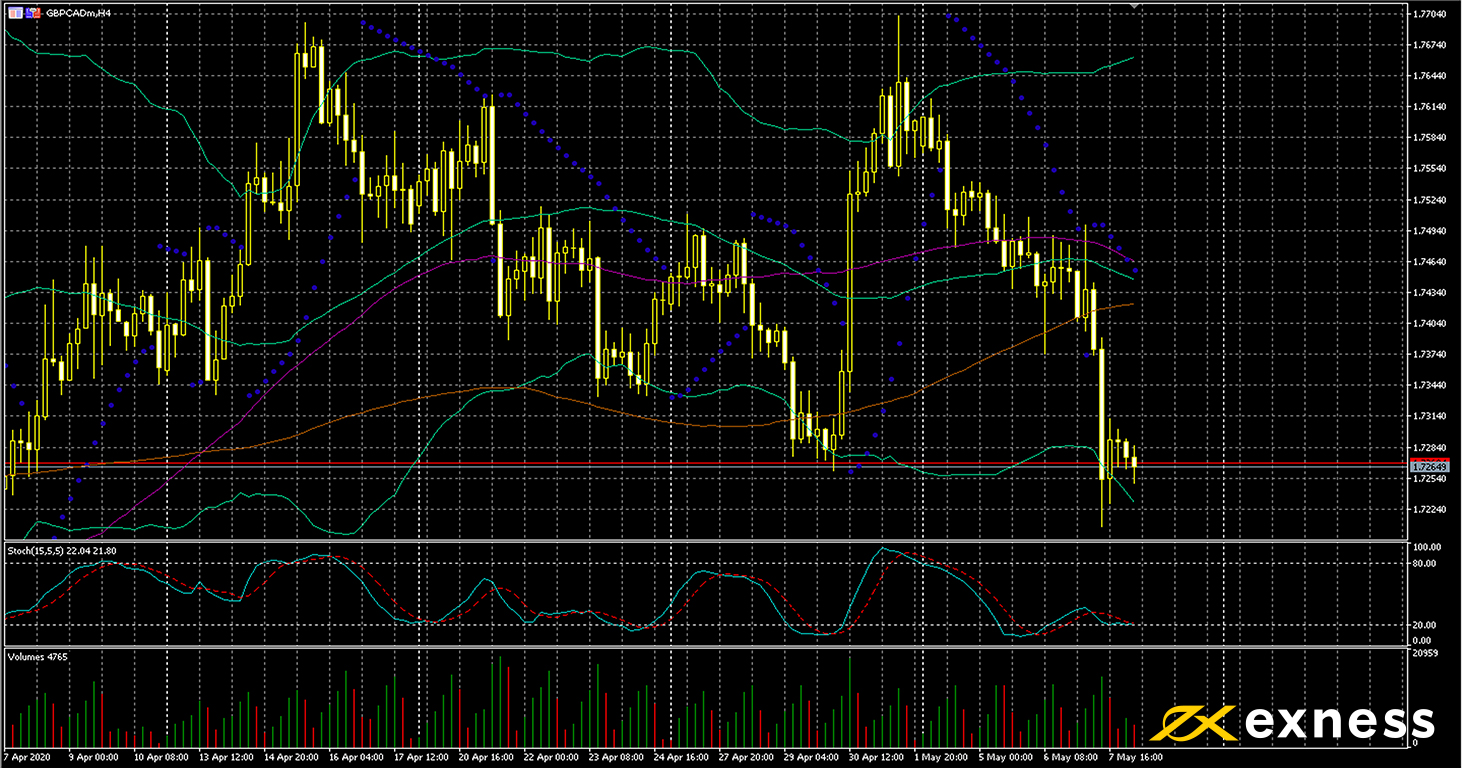 Charts of the pound against the loonie have been pretty similar to most other major pairs with sterling. Click on the image to magnify. The main difference in fundamentals here is the Canadian dollar’s strong correlation with crude oil. As oil has recovered somewhat from record lows in recent weeks, CAD has also found fundamental support.

GBP–CAD’s range based on the daily charts is essentially intact although it has widened since March. There hasn’t been any continuation downward yet after the two large down candles around the BoE’s meeting yesterday: buying volume remains fairly high and the slow stochastic is still very close to oversold at 25.

The main hurdle for buyers around this afternoon’s Canadian data could be the bunch of moving averages around $1.744. As above, though, medium- and long-term traders might prefer to avoid trading the news under these conditions. Canadian employment change for April is currently expected at negative 3.5-4 million. If correct, this would be the worst release in the country’s history, and might drive gains for GBP–CAD at least in the near future.

Thank you for reading Exness Education’s weekly roundup, and thanks again to Faithful and Nicholas for your requests on Facebook. Exness Education reminds readers that trading during important releases of data is particularly risky: care should be taken to use appropriate stops and other techniques to manage risk. If in doubt, you can easily test your strategy on a demo account to avoid any risk of losing real money.