Weekly data preview: British employment and inflation around the world

Positivity dominated in many markets on Monday morning GMT after the USA and China had reached a preliminary trade deal at the end of last week. The two countries held separate press conferences on Friday to announce that they’d achieved what the media are calling a ‘phase one’ deal on trade, ending (or at least pausing) an extended period of gloom in this area.

China has agreed to boost its buying of various American products like crude oil, soybeans and processed food in return for the cancellation of new tariffs due to take effect yesterday. The first of these is the most important for markets, with the price of oil reacting quite quickly since Friday night GMT to test new quarterly highs above $65.50.

Traders of the pound are also still positive in the aftermath of Thursday’s landslide victory for the Conservatives. Brexit with Mr Johnson’s deal now seems almost certain on 31 January, so politically driven instability might be over or at least reduced for the British economy next year.

This week’s most important data come from the UK, Canada and Japan, with these countries all releasing figures for inflation in November. Focus is on the UK particularly because of Tuesday’s key employment data. However, income and spending from the USA on Friday also have the potential to move markets. 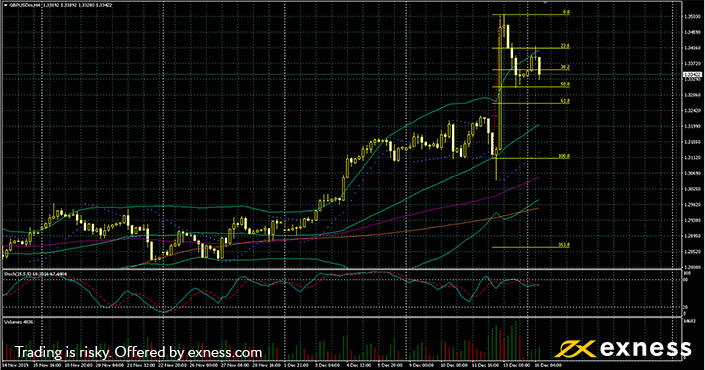 The pound jumped in the immediate aftermath of Thursday night’s exit poll that predicted a stunning majority of over 85 for the ruling Conservative party. The final result with a majority of 80 was greeted with another attempt to move up and test new highs.

Technically, though, it’s likely to be a challenge for price to retest $1.35 in the near future even though momentum remains clearly towards the upside. The focus of traders this week is going to be on employment data on Tuesday plus British inflation on Wednesday morning. That said, the dollar’s performance in the context of news about the trade war is also likely to be important. 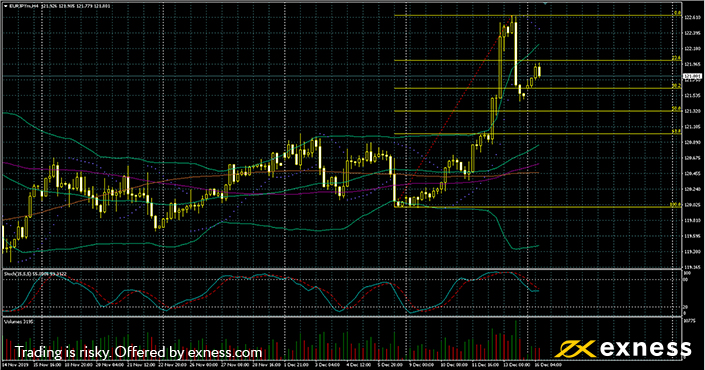 Better sentiment and the return of ‘risk on’ since the second half of last week have given the euro a major boost against the yen. Data from the EU and particularly Germany has been somewhat better on the whole recently. Flash manufacturing PMI from Germany on Monday morning at 43.4 was a bit lower than expected but better Chinese industrial data offset this negative somewhat.

The technical picture here is fairly similar to that of cable, not surprising because the three currencies involved across the two charts are driven by basically the same fundamental factors. Here though, we can see that the euro was even more strongly overbought than the pound after Thursday’s exit poll, with no less than five closes significantly outside the upper deviation of bands. Add the golden cross of the 100 and 200 DMAs on Friday to the current consolidation and the technical conditions for the start of a new upward trend all seem to be there. 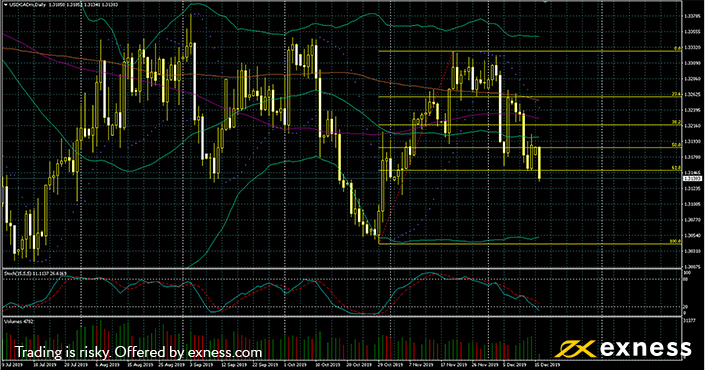 The return of positivity on trade and generally decent gains for crude oil have cut short what looked like an incipient rally for USD–CAD. This chart shows us fairly strong momentum to the downside in December so far, with the lion’s share of last month’s upward movement having been retraced.

A close below the 61.8% Fibonacci area might be key for more sellers to get involved here, but oversold conditions predominate according to the stochastic. Despite the technical picture on the dailies looking negative, volatility is very high on the four-hour chart. Wednesday’s inflation release from Canada is likely to be key for direction moving forward.