Renewed protests and rioting in Hong Kong over China’s planned introduction of the Hong Kong National Security Law has led to nervousness and some losses in Asian markets so far today. Every main Asian index apart from the Shanghai Composite is down today, with American indices having led the way last night as the American government announced that Donald Trump will hold a press conference on China in the afternoon GMT. This weekly roundup looks as USTEC plus some key pairs with the euro and dollar. Thank you to everybody who requested these symbols on Facebook!

Most of the important economic data around the world this week have been in line with negative expectations. American second estimate quarterly GDP yesterday showed a drop of 5%, slightly worse than the consensus. On the other hand, much of this week’s European releases were marginally less bad than the consensus, giving a boost to the euro in many of its pairs. 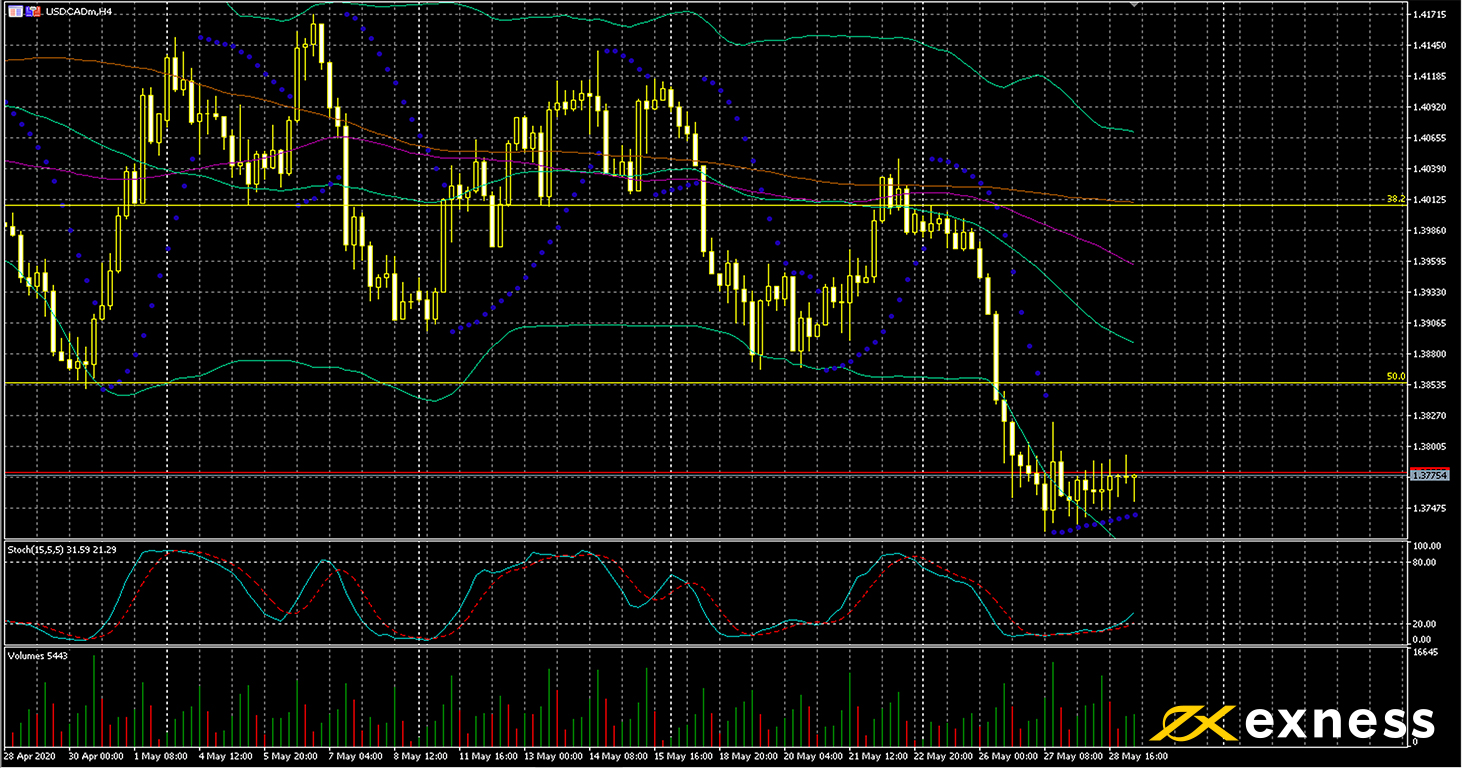 The greenback has generally lost some strength this week as the effects of covid-19 on the American economy continue and Mr Trump seems to be determined to stir the pot with China again. Rioting in Minnesota over the killing of George Floyd has increased instability further in one of the regions hit badly by the virus.

USD–CAD seems to have hit a bottom on the chart for now around C$1.375. Having moved out of oversold on Wednesday based on both Bands and the slow stochastic, a resumption of the downward movement seems to be favourable sooner or later depending on upcoming data. Traders are reminded that this symbol will probably be highly volatile this afternoon around the Canadian GDP releases. 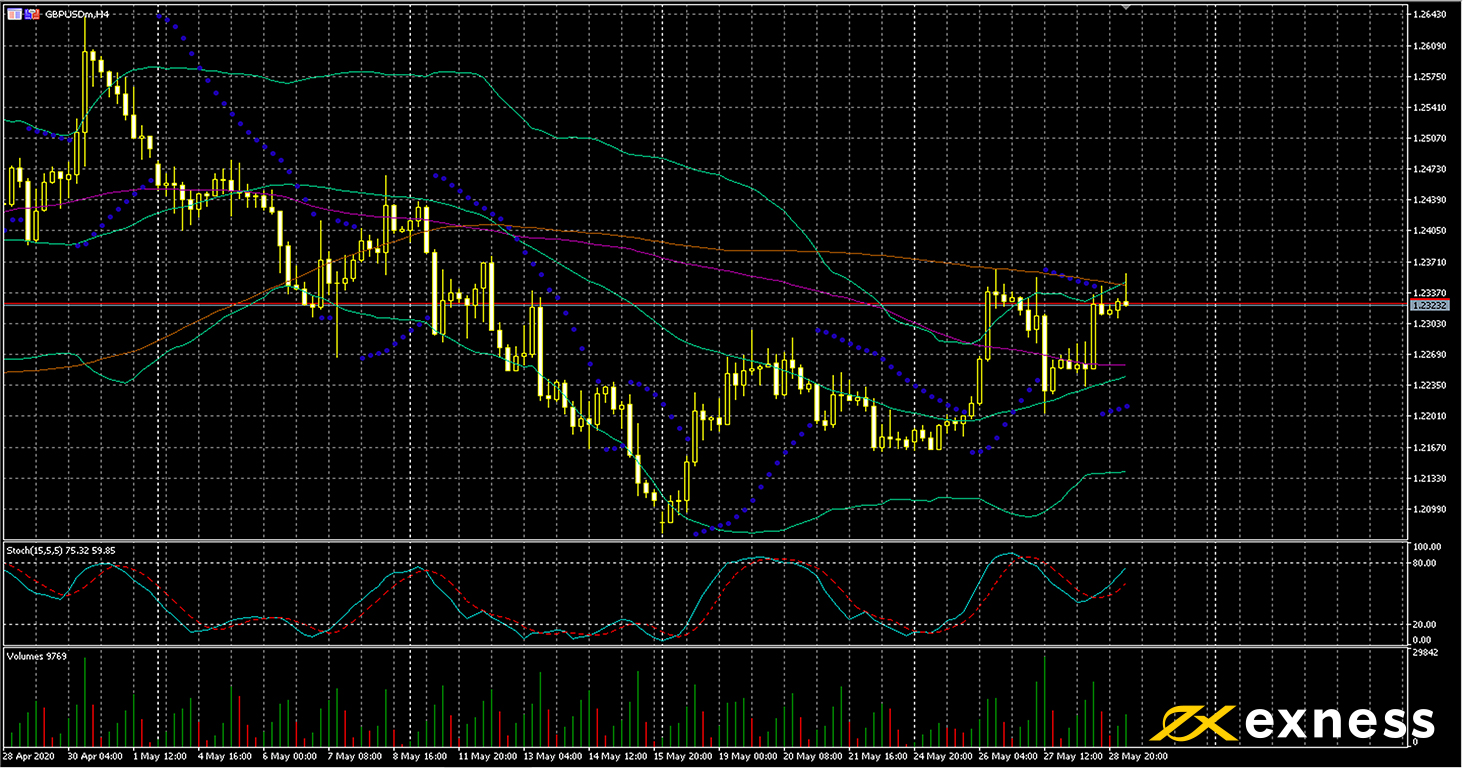 The pound has also posted gains against the dollar this week in the environment of general weakness relatively speaking for the latter. Yesterday’s weaker than expected American GDP has helped the pound to hold on to areas above $1.23. The FTSE 100 is generally not viewed as having any clear correlation with the pound, so losses by British shares so far today haven’t had much of an effect on this chart.

From a technical standpoint, it looks difficult for the pound to continue upward much beyond this in the near future. Buying volume has increased sharply this week compared with last week’s average, but price in the value area between the 100 and 200 SMAs and only slightly below the upper deviation of Bands could discourage more gains. Personal income and personal spending from the USA are today’s key data for this symbol. What Donald Trump says in his upcoming press conference might also bring volatility for most pairs with the dollar. 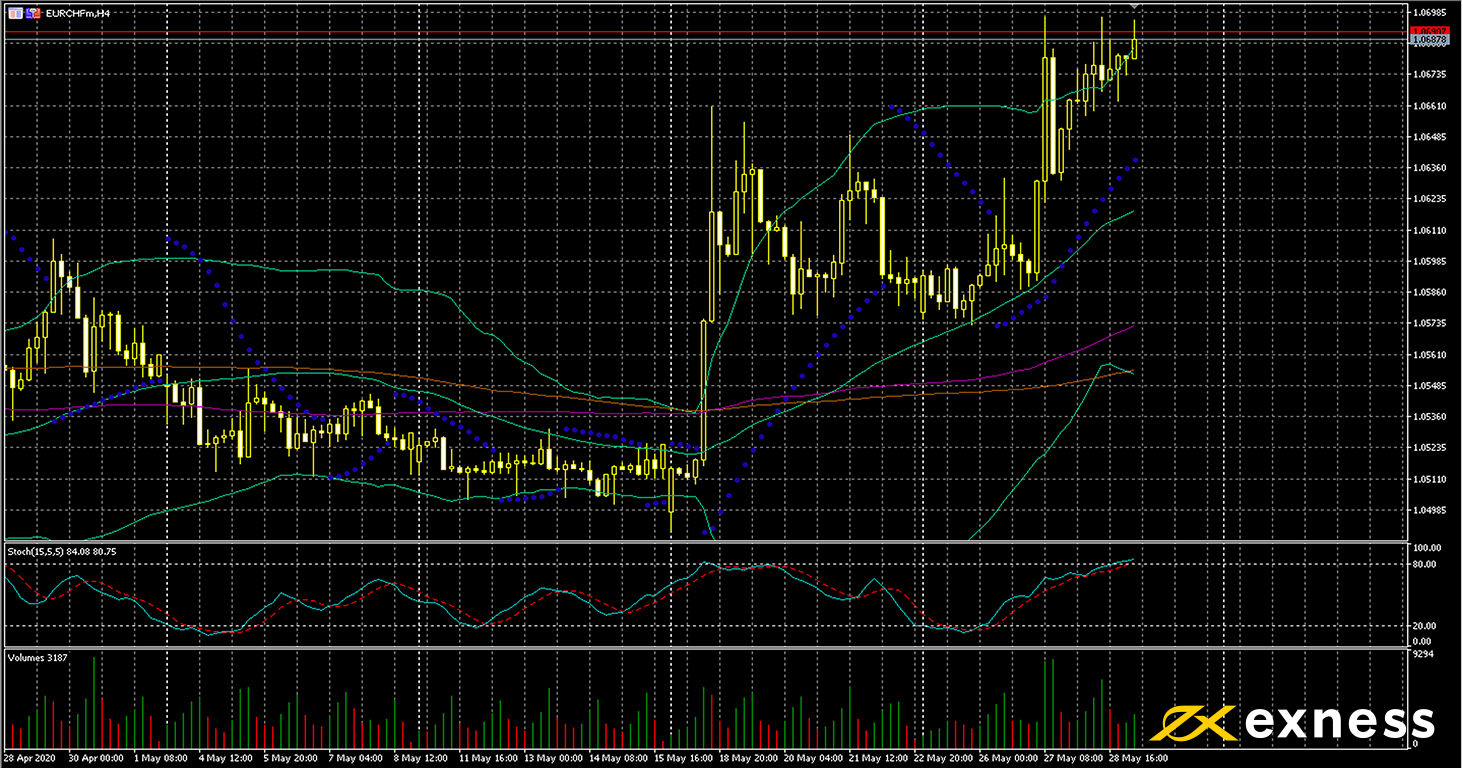 EUR–CHF has made dramatic gains over the last fortnight although volatility has been fairly high. The common currencies bounced from oversold on the dailies starting in the middle of May as risk appetite improved somewhat and countries in the eurozone started gradually easing their lockdowns. The question here is why the franc hasn’t appreciated again in the context of losses in equity markets today. As a traditional haven, one would expect CHF to move up if Sino-American trade tensions return to focus.

On this particular timeframe, a retracement downward seems likely fairly soon. This is because there are strong overbought readings from both Bollinger Bands and the slow stochastic. Given very high buying volume this week, though, the bounce might continue after such a retracement assuming the tone of the news doesn’t change dramatically next week. Traders should also be aware that the sharp movements over the last two weeks could suggest continuing intervention by the SNB, selling the franc for the dollar and euro in an attempt to avoid what it might deem excessive appreciation of Switzerland’s currency. 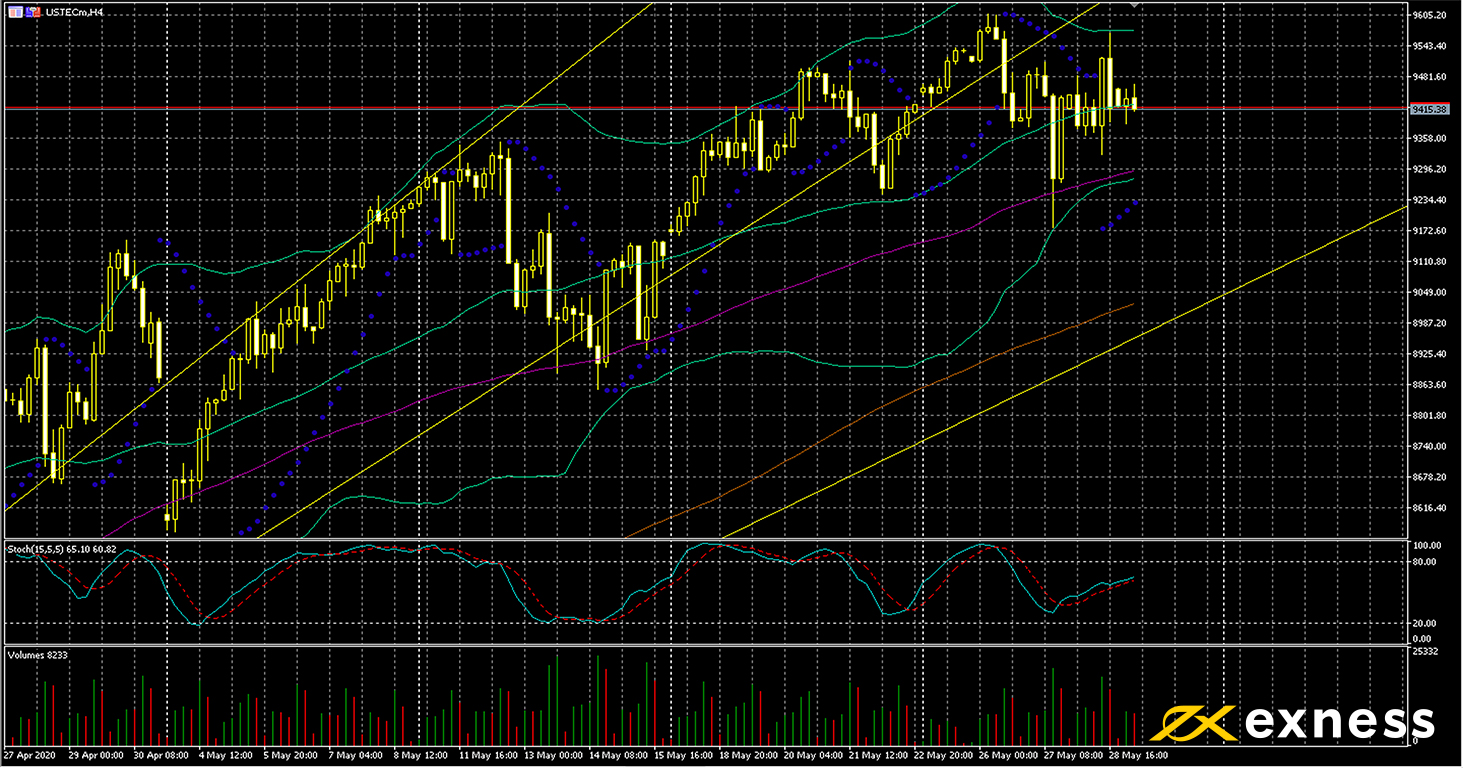 The representative CFD on the Nasdaq 100 has held on to recent gains quite well so far this week although volatility has been a bit higher. Many cyclical shares continue to show growth since lows in March, and there’s no sense yet of another round of serious panic in American equity markets. Mr Trump’s comments this afternoon though might be key for American indices.

The Fibonacci fan drawn based on the daily charts has generally framed USTEC’s recent gains quite well. There hasn’t been an extended movement above the 38.2% area, but at the same time there’s also been no attempt to challenge the 61.8%. A retracement from the current area and a test of the latter might signal continuation upward if the fundamental circumstances permit. On the other hand, it’s possible that the 100 SMA could function as a key support before this. 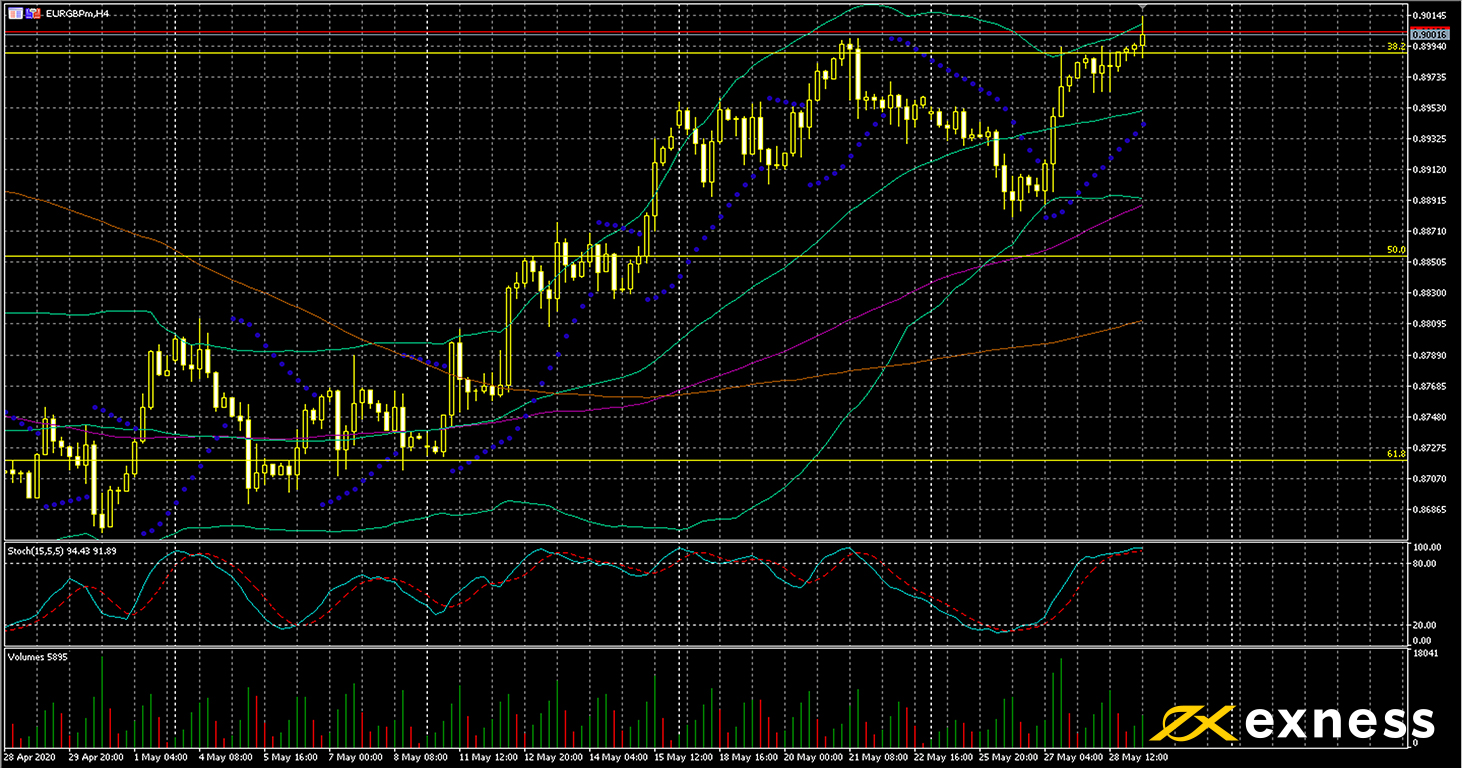 The euro has resumed its gains against the pound this week amid somewhat less bad data, easing of lockdowns in the eurozone and general gains for European indices. The British government’s recent crisis over Dominic Cummings’ blatant breach of the lockdown has seriously dented public confidence in its ability to weather the crisis successfully. Meanwhile Chancellor Rishi Sunak is expected to outline today how the current furlough scheme will be reduced.

The technical picture here is somewhat similar to euro-franc (see above), but with the pound not usually being considered a haven, more gains seem to be fairly likely sooner or later. The big spike in buying volume this week might suggest high demand pushing price beyond the key resistance of 90p. If this happens, further extension would be in view despite overbought from Bands and the stochastic. PMI data from both the UK and the eurozone’s largest economies on Monday morning might support or dispel this impression. 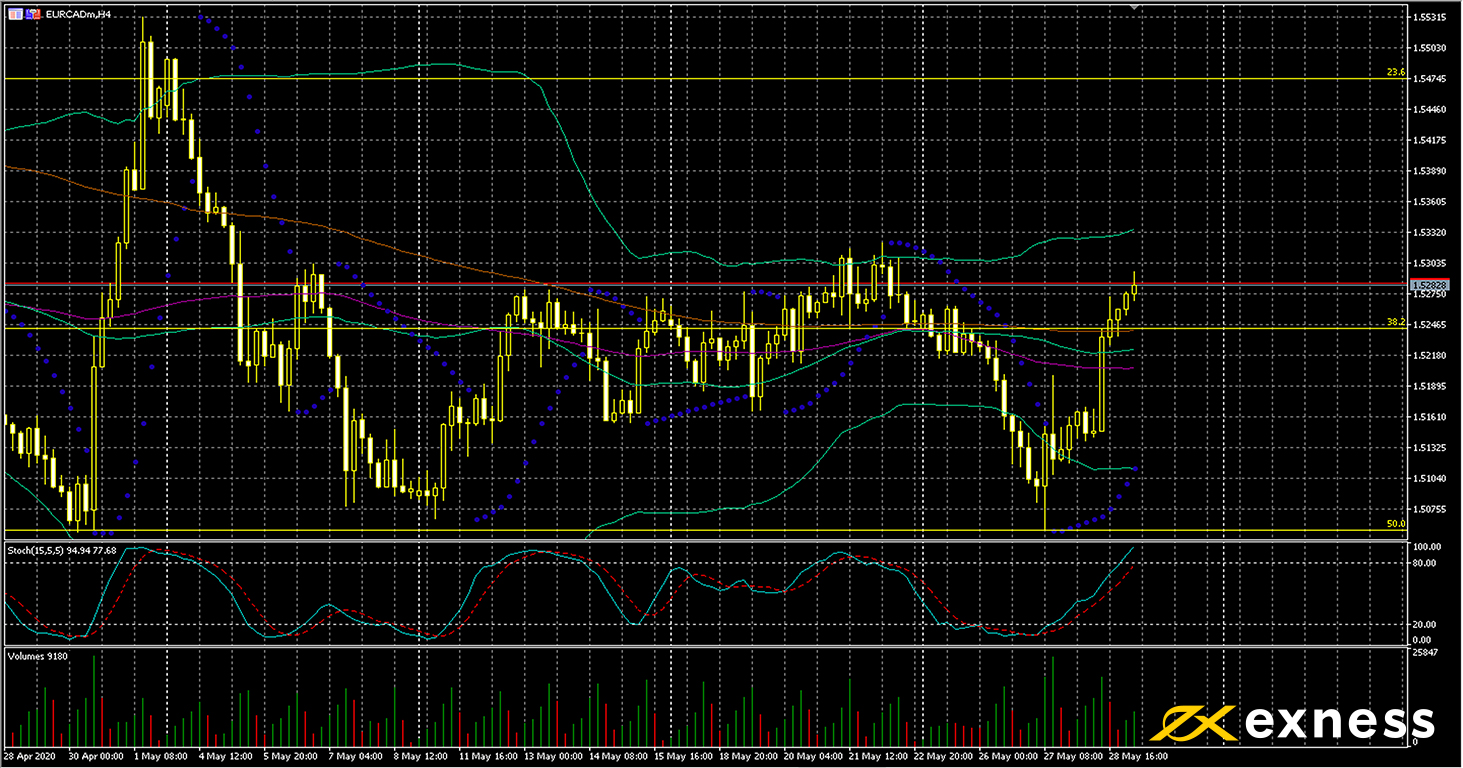 While fundamentals for EUR–CAD are basically similar to those affecting these two currencies in other pairs (see above), there seems to be much more space here for the euro to push upward. The strong bounce on from the 100 SMA on the daily charts since Wednesday and contracting Bollinger Bands recently would usually be seen as suggesting a buildup for a breakout.

Much like other pairs with the euro, buying volume increased sharply this week compared with the average in May so far. The first key resistance on this four-hour chart is the 23.6% Fibonacci retracement area from the daily chart. The 50% Fibo zone slightly above the crucial psychological area of C$1.50 is likely to be a very strong support unless this afternoon’s GDP data from Canada are astoundingly positive.

Thanks again to everybody who commented on Facebook requesting one of these symbols! Please join us again next week as we continue to analyse the most active symbols.