This week’s trading seems likely to end with a bang in the aftermath of a fairly sharp retracement by a number of indices. Oil has likewise retraced since yesterday while gold has bounced from two-month lows around $1,675 to test June’s highs yesterday. These developments come as the USA reached two million total cases of covid-19 this week and hopes of a V-shaped recession are declining once again.

A total of 44 million new jobless claims have been made in the USA in the last 12 weeks. Although rehiring does seem to have started and 6 June’s initial jobless claims were below two million for the second consecutive week, 1.54 million is still extremely high in the context of many states reopening. Nervousness in stock markets and its knock-on effects are likely to continue next week as well given the current gulf between the prices of shares and the real economy.

Today we’re taking a brief look at three crucial symbols from this week’s trading, namely four-hour charts of gold-dollar, USOIL and USTEC (the representative CFD based on the Nasdaq 100). Read on for quick analysis of the charts and possible areas of importance into next week. 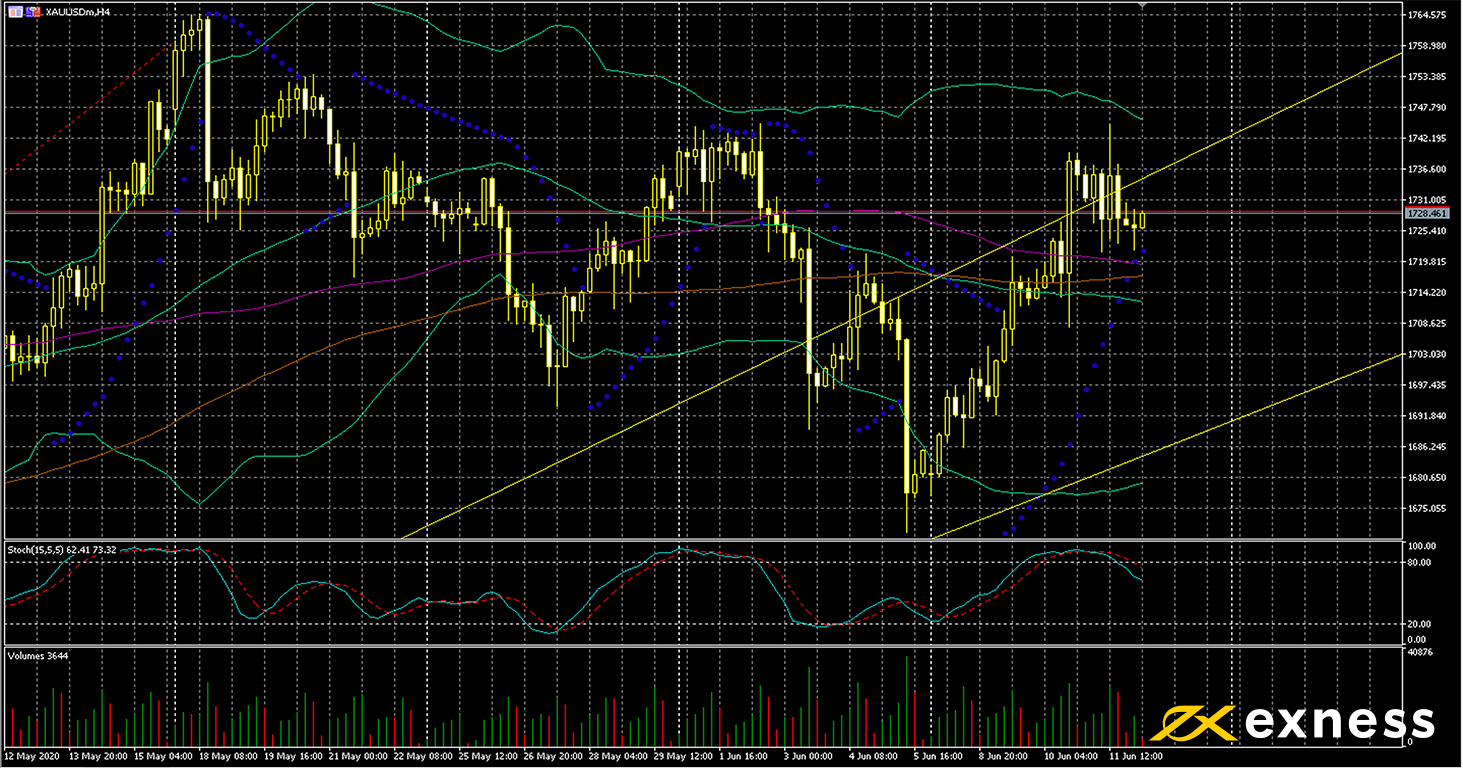 Gold has bounced from the area of the 50% Fibonacci fan based on the daily charts. Click on the image to magnify. For the moment, though, the yellow metal has faced headwinds around June’s high so far near $1,740. Generally speaking, losses by shares suggest ‘risk off’ and gains for gold. The current environment of near-zero or negative rates of interest for most major currencies also removes the traditional downside to buying gold for investors in the deliverable metal.

From a purely technical perspective, more gains can probably be expected. XAUUSD is no longer overbought based on either the slow stochastic or Bollinger Bands. The 38.2% zone from the daily Fibonacci fan could function as a resistance though next week or otherwise serve to frame likely ranges over the next week or so. Fundamental events are crucial for gold next week, though, so traders should continue to watch the news from stock markets carefully before making any decisions. 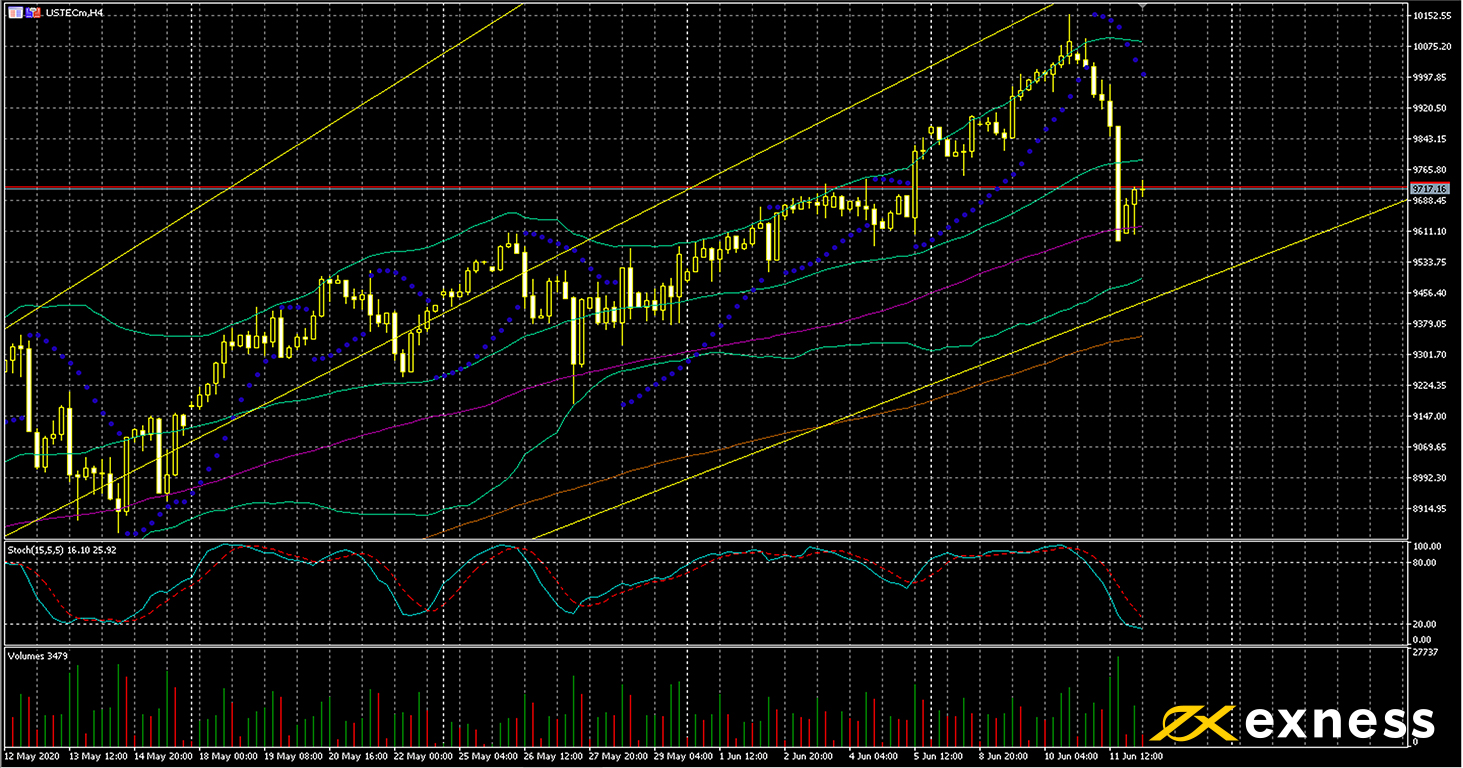 Of the three major American indices, USTEC is usually in the middle in terms of volatility although it’s typically the most vulnerable to tech selloffs given its constituents. Click on the image to magnify. Numerous shares in this index sold off yesterday, with some like AMD losing more than 5%, as expectations of a quick recovery in the job market decreased once again. Better (or at least less bad) job data is typically a boon for cyclical shares like tech, helping them to recover from crises, given that new jobs usually indicate higher consumer spending in the future.

For the moment, the retracement seems to have paused around the 100 SMA. There’s no sign of oversold from Bollinger Bands but the slow stochastic at 15 does signal selling saturation. Traders should also observe the very large buying volume during the large down candlestick, suggesting that demand to ‘buy the dips’ remains very high. Realistically though there is probably more room for USTEC to decline over the next week or so given that it actually made new highs in three successive sessions earlier this week. In the context, this is a bit of a disconnect from what’s actually happening with economic numbers. 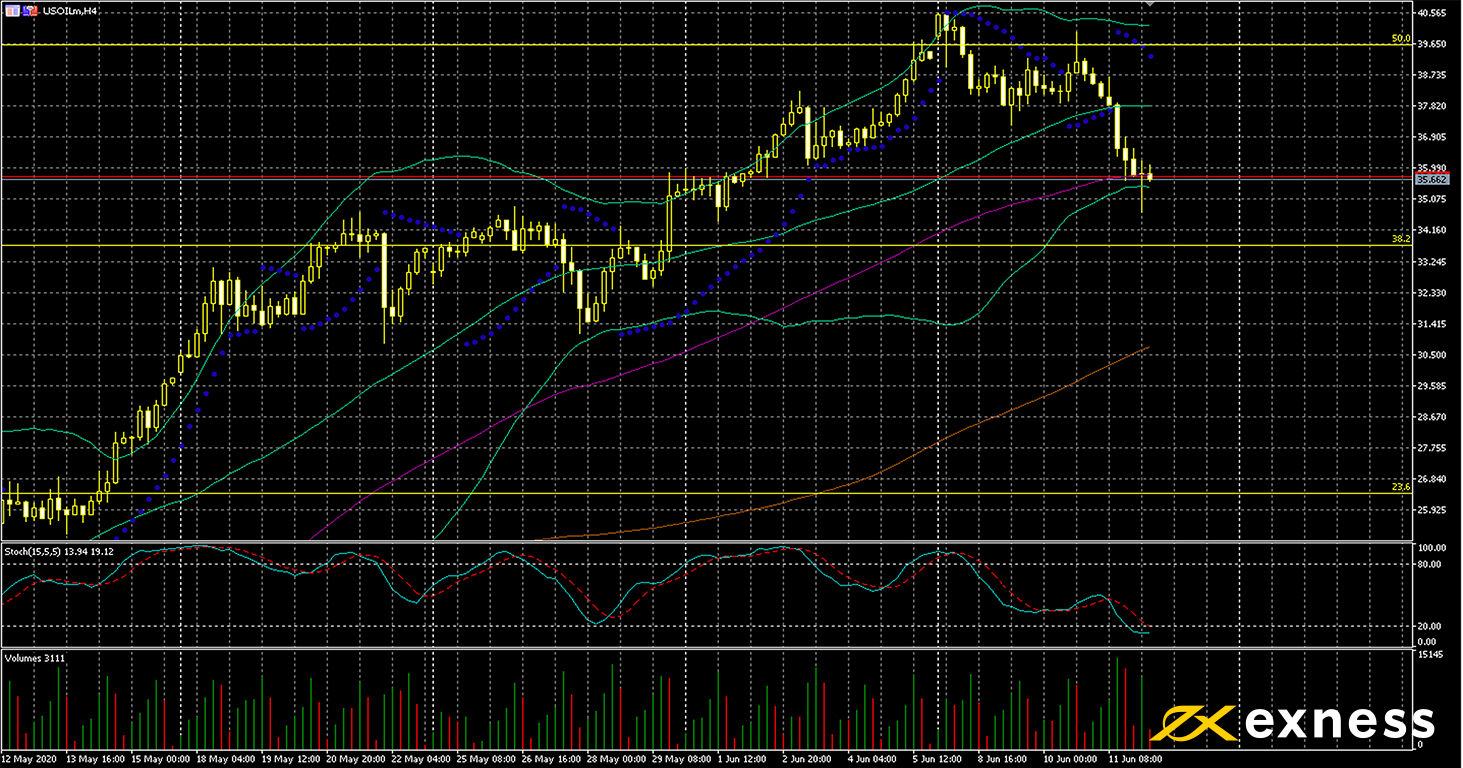 In a somewhat similar way to many shares around the world, oil seemed to have overreached over the last few weeks. Click on the image to magnify. Although the outlook for demand in the second half of the year isn’t quite as bad as had been feared in March and April, it remains close to 20-year lows. China’s recent return to growth for manufacturing at least has been a positive factor for oil, though.

The retracement here is somewhat more developed than that for USTEC with early signs having occurred at the end of last week. The very latest price action adumbrates the 100 SMA’s importance as a support for now, but another downward wave is possible given the absence of any key psychological support near here. On balance, there seems to be some evidence that Q1’s strong downtrend is over while at the same time the current upward wave has pushed too high for the time being.

Thank you for reading Exness Education’s weekly roundup of markets! Join us again next week for our preview of data plus more analysis of active instruments. Finally, don’t forget that you can request a symbol to be covered here by commenting on Facebook.