The pound and gold have been some of this week’s biggest gainers against the dollar. Oil though has remained insipid without any clear direction. Some of the key factors driving various markets this week included political action to mitigate the economic effects of the coronavirus, notably in the USA and the UK, and the surge in demand for gold as interest rates have been drastically reduced around the world. This weekly roundup of markets considers how the news has interacted with some key charts.

Today we’re taking a quick look at the charts of cable (GBP–USD), gold-dollar (XAU–USD) and Brent crude (UKOIL). In each case, fundamental events next week are likely to have a major impact on prices. 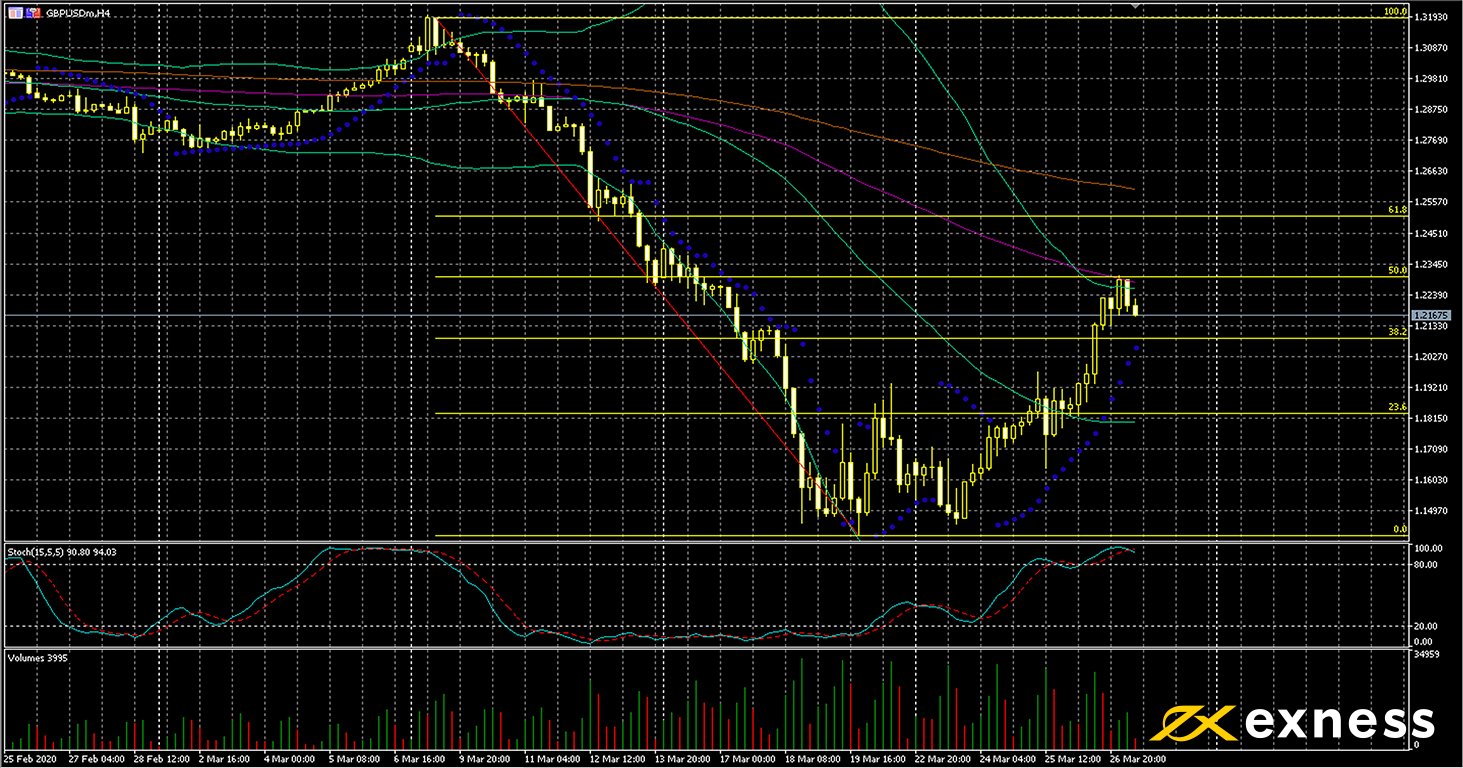 The pound’s sharp losses against the dollar seem to have halted for now. Click on the image to magnify. One of the most important events in the news for the pound this week was of course the UK entering lockdown from Sunday night. The Chancellor, Rishi Sunak, also announced an extensive package of economic support for small businesses, with the self-employed expected to be included sooner rather than later.

A bounce was also not unexpected from a technical standpoint. The slow stochastic remained clearly within oversold for most of the previous two weeks, and the double-bottom pattern would usually be expected to signal a retracement to some degree.

The major hurdle for the bulls here is the 50% Fibonacci retracement. If price can hold above this for a few periods, one might expect consolidation around the current area. On the other hand, the slow stochastic has now moved clearly within the overbought zone at around 91, so short-term losses could be more favourable. 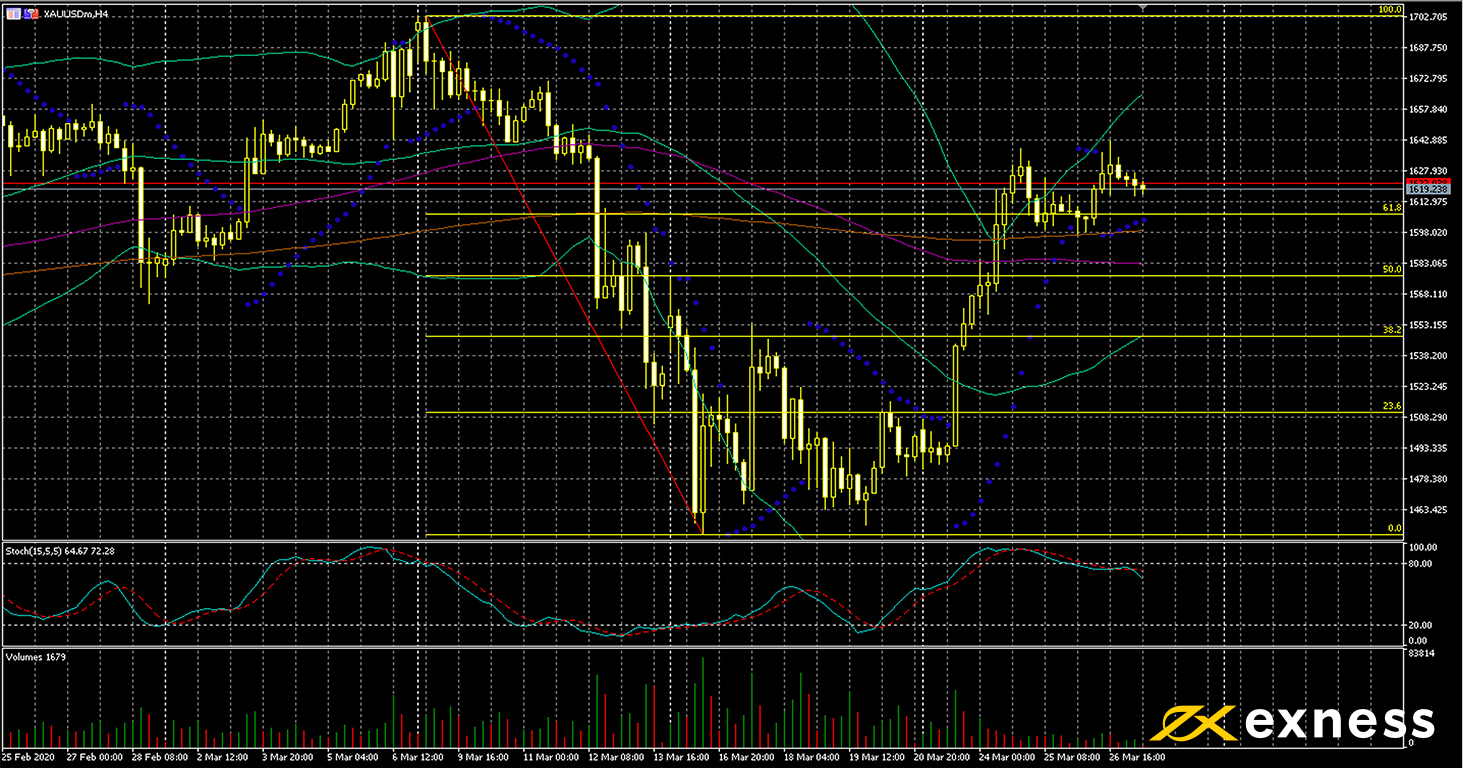 Demand for gold soared this week as investors and traders overcame the initial shock of the first-phase crash across markets. Click on the image to magnify. With rates now at zero in the USA as well as the eurozone and nearly zero in other countries like the UK, the yellow metal becomes more appealing. The main fundamental factor driving buyers here is the increasing likelihood of an extended period of economic recovery rather than a ‘v shape’.

For the time being, the 61.8% Fibonacci retracement area seems to be holding as a resistance. There hasn’t yet been any extended movement above this zone. That said, price has now moved beyond the ‘value area’ between the 100 and 200 simple moving averages and moved out of overbought based on the slow stochastic. A retest of early March’s highs would probably depend on the news next week. 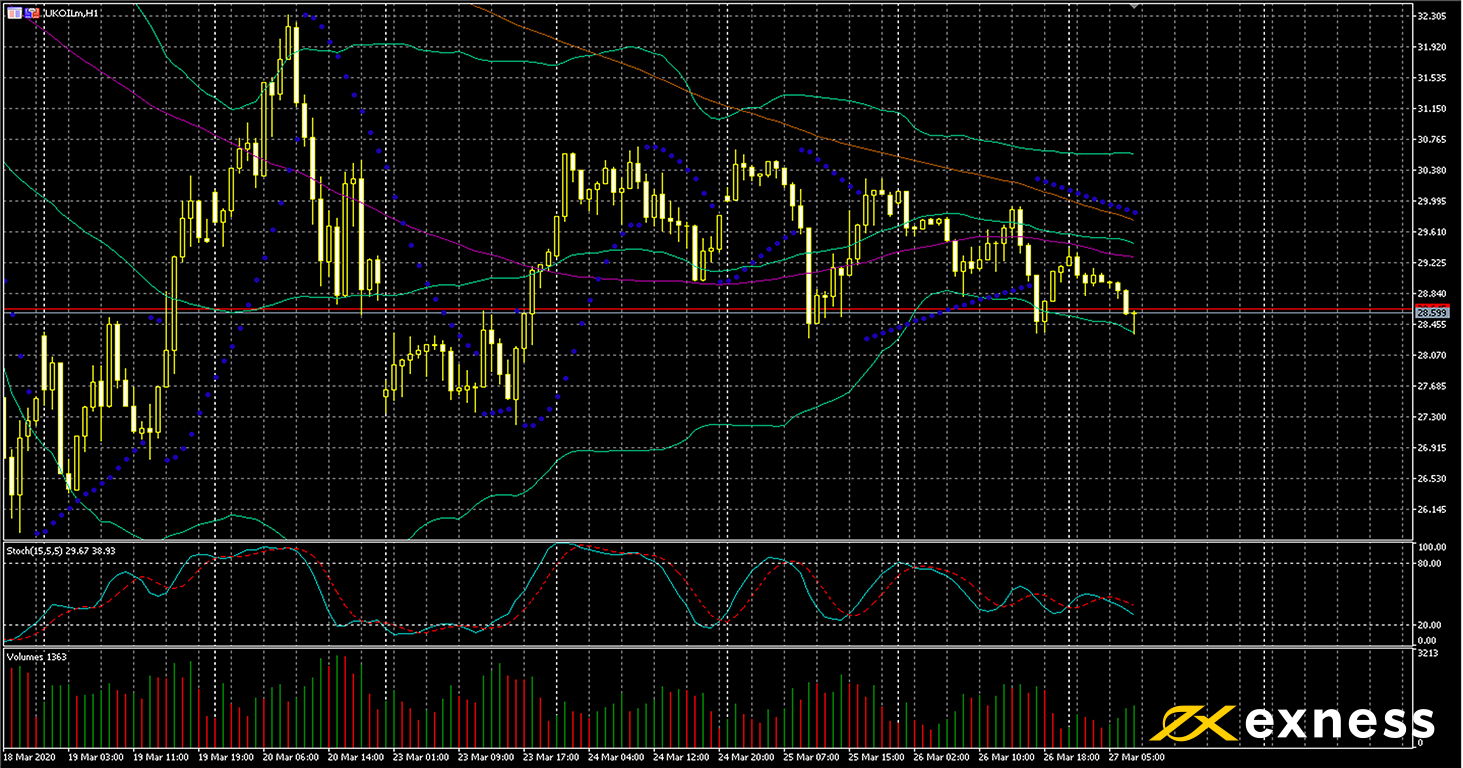 UKOIL has been pretty inactive this week, relatively speaking. Click on the image to magnify. Brent seems to be set to post a small overall weekly loss, driven mainly by much lower demand around the world and higher supply from Saudi Arabia. Rumours of a deal between the USA, Russia and Saudi Arabia to cut production and drive up prices have yet to be confirmed. Even if a deal of some sort on production could be agreed, the question would remain of where demand might come from in the coming months.

The area of approximately $28.40 seems to be functioning as a support on this timeframe. Every bounce from there though has been progressively smaller. This combined with MAs sloping downward would seem to favour short-term selling. There probably isn’t much scope for price to test new lows on the four-hour or daily charts just yet, though.

Thank you for reading Exness Education’s weekly roundup of markets! Check back on Monday for our weekly data preview and throughout next week for more analysis of the most active symbols.