There’s been more chaos in most markets this week as the economic crisis caused by the coronavirus escalates. American indices have erased their ‘Trump gains’ as of yesterday and a number of central banks have introduced emergency measures. This weekly technical roundup presents information from some of the key charts from the last few days.

The dispute over the price of oil between Russia and Saudi Arabia has intensified; the Kingdom is flooding markets with cheap oil and has stepped up exploration of new oilfields. The flight to cash in various markets has given the dollar a huge boost, with the greenback reaching 20-year highs against various other currencies, notably the pound, Aussie dollar and peso.

Today we’re taking a look at the four-hour charts of four important symbols that’ve been highly active this week: euro-dollar, dollar-franc, cable and bitcoin-won. Technical analysis can help traders to discover areas of possible importance as supports and resistances. 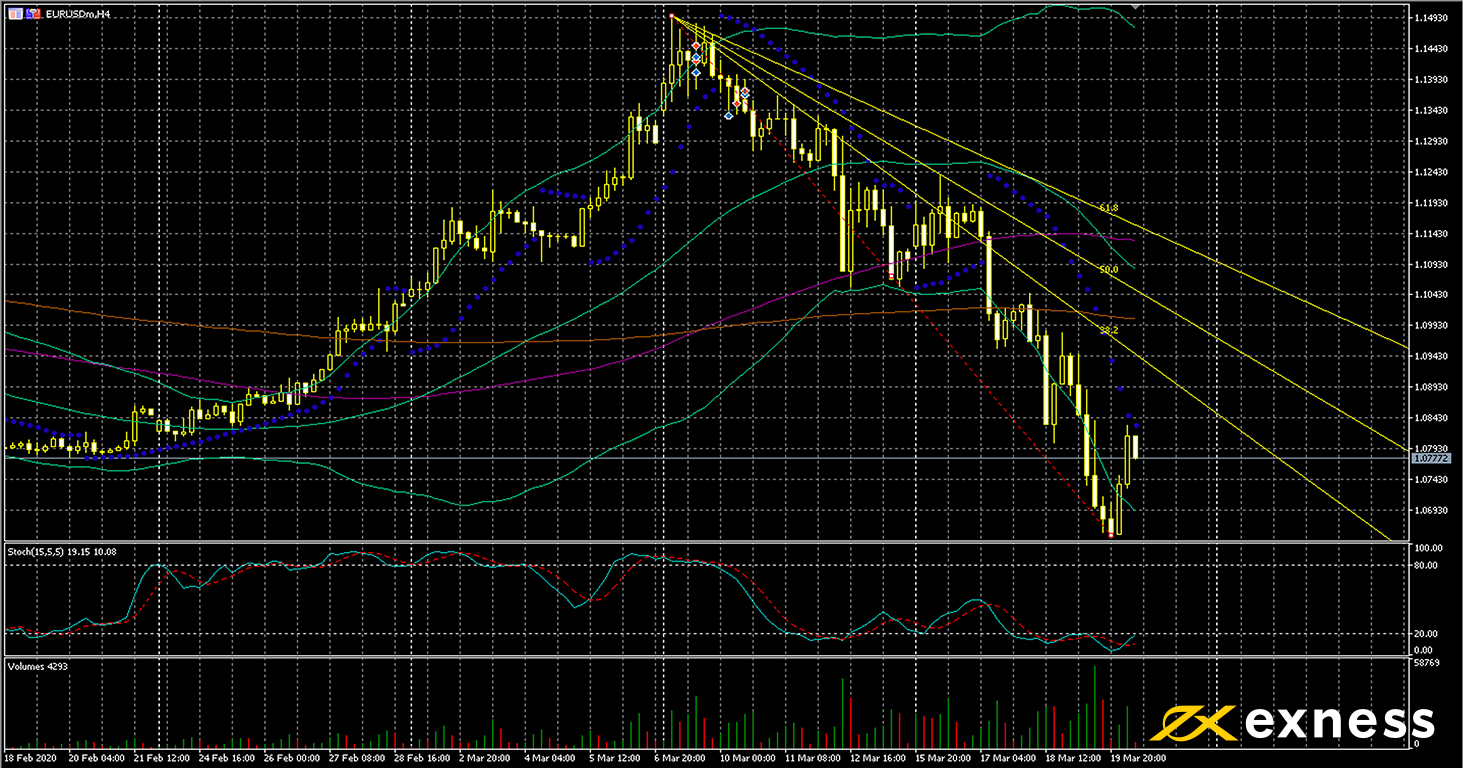 The euro like many majors has posted sharp losses against the dollar this week, moving downward to test 30-month lows. Click on the image to magnify. Demand for the dollar is likely to remain high from a fundamental point of view next week as well.

Low support here is probably December 2016’s low around $1.03. One would probably expect to see a bounce if price moved into this area under oversold conditions from either or both of Bands and the slow stochastic. High resistance appears to be the recent high visible on this chart of around $1.15.

Both moving averages and Fibonacci could generate other zones of importance to the upside which might cap a potential retracement. The first key area above is the 50% zone from the Fibonacci fan which is about to coincide with the 50 SMA from Bands.

On the other hand, more ongoing losses after price emerges from selling saturation might be more favourable in the near future than an extended retracement upward. Fundamental events and correlations, particularly news from central banks and stock markets, are likely to be key drivers here. 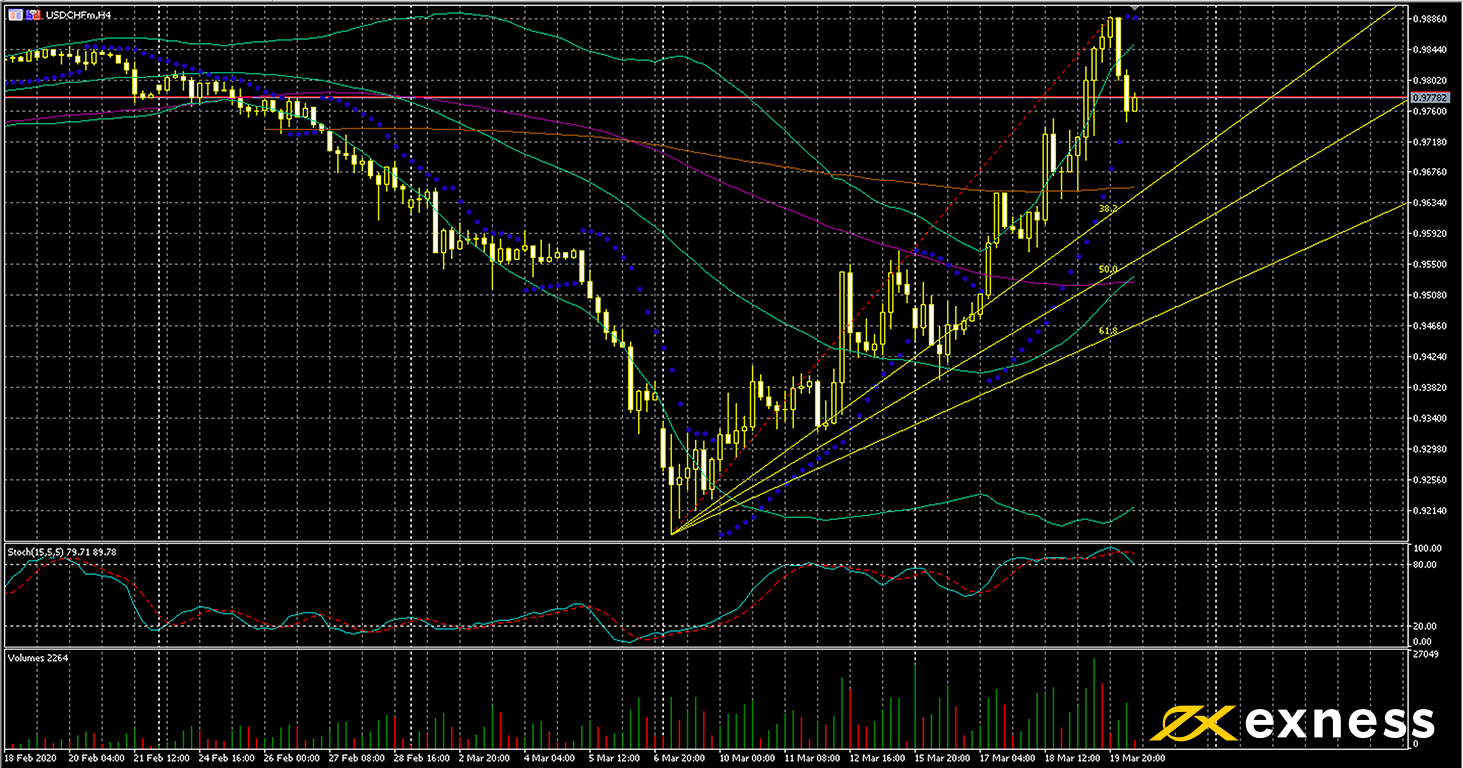 USD–CHF has also seen a huge impact from the sudden surge in demand for the dollar, with fairly large losses at the start of the month reversed completely by the time of writing. Click on the image to magnify. The franc is traditionally seen as an important haven, along with gold and the yen, but it appears that the majority of people involved here consider the flight to cash more important than the flight to ‘safety’.

The technical picture basically resembles that of EUR–USD, with the dollar coming out of oversold and very quickly moving into overbought. The most important high resistance here is likely to be the critical psychological area of fr.1. Exactly one franc to the dollar would probably lead to a pause if not a retracement downward. Low support is probably the most recent low around 91.5 centimes, visible in the middle of the chart.

Before price tests either of these areas though one might expect to see a degree of retracement towards the confluence of the 38.2% area from the Fibonacci fan with the 200 SMA. This might be a strong support from which one would expect to see a bounce unless there’s a significant change of tone in the news. 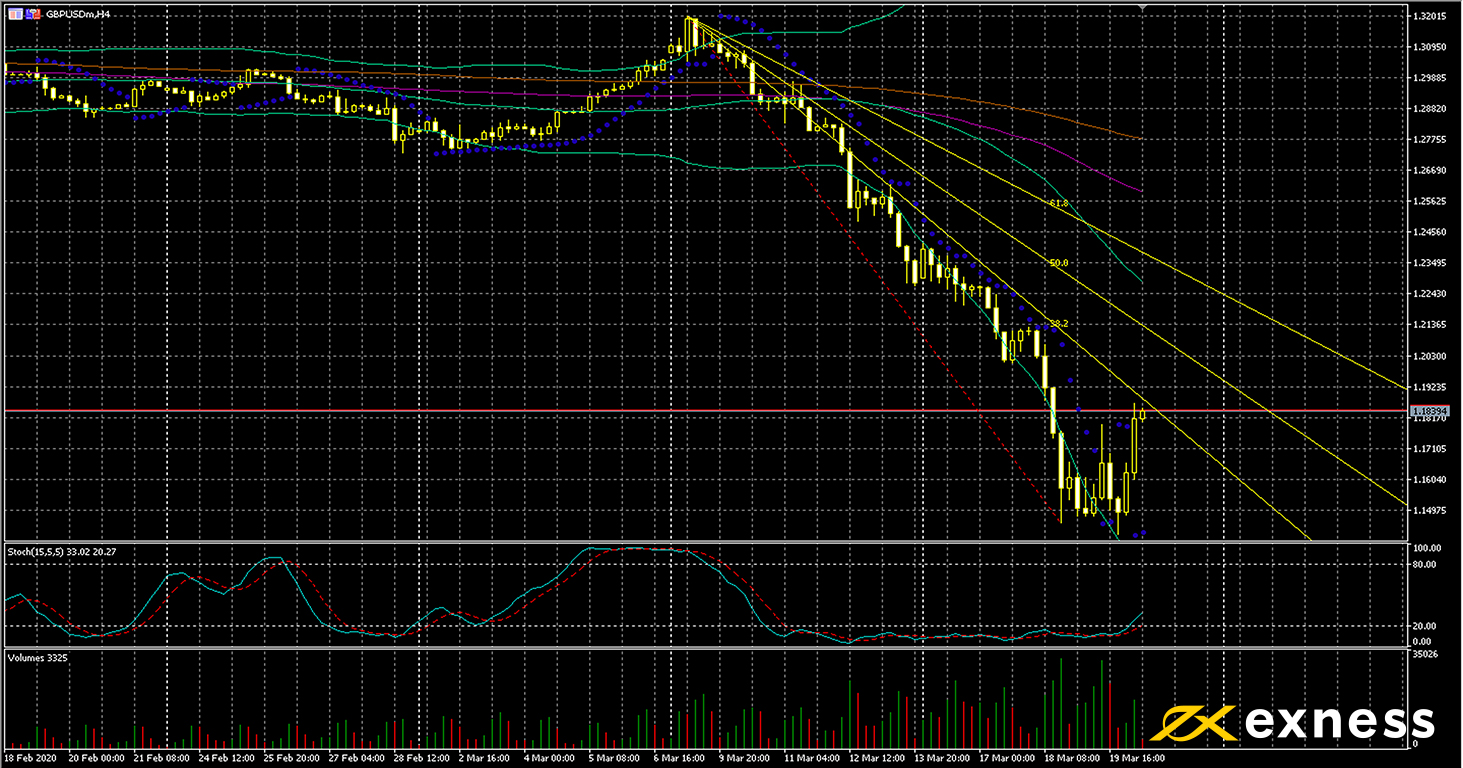 Things are a bit different for cable, not least because the pound was already under some pressure before the current crisis. Click on the image to magnify. The UK’s ongoing trade negotiations with the EU had led to some uncertainty, with many observers questioning how realistic Mr Johnson’s timeframe for getting a deal was. Britain is now one of the more vulnerable countries to covid-19, and the UK’s strategy to tackle the virus is widely seen as being very risky.

A retracement is already in progress here, with price currently testing the 38.2% zone from the Fibonacci fan. We can also observe that oversold is no longer the situation after a movement back inside the lower deviation of Bollinger Bands; the slow stochastic completed an upward crossover in oversold as well.

Certainly the most important low support here is 1985’s low of $1.0455. This was the lowest rate for the pound against the dollar since the foundation of the USA in the late 18th century. Realistically, though, it would almost certainly be a few weeks at least before such a price could be challenged.

High resistance seems to be the high visible on this chart around $1.32. The three moving averages and three Fibo areas here are likely to provide some resistance though before any extended movement upward can accumulate. For sellers, this seems to be a reasonable place to enter assuming that appropriate risk management and stops are in place. 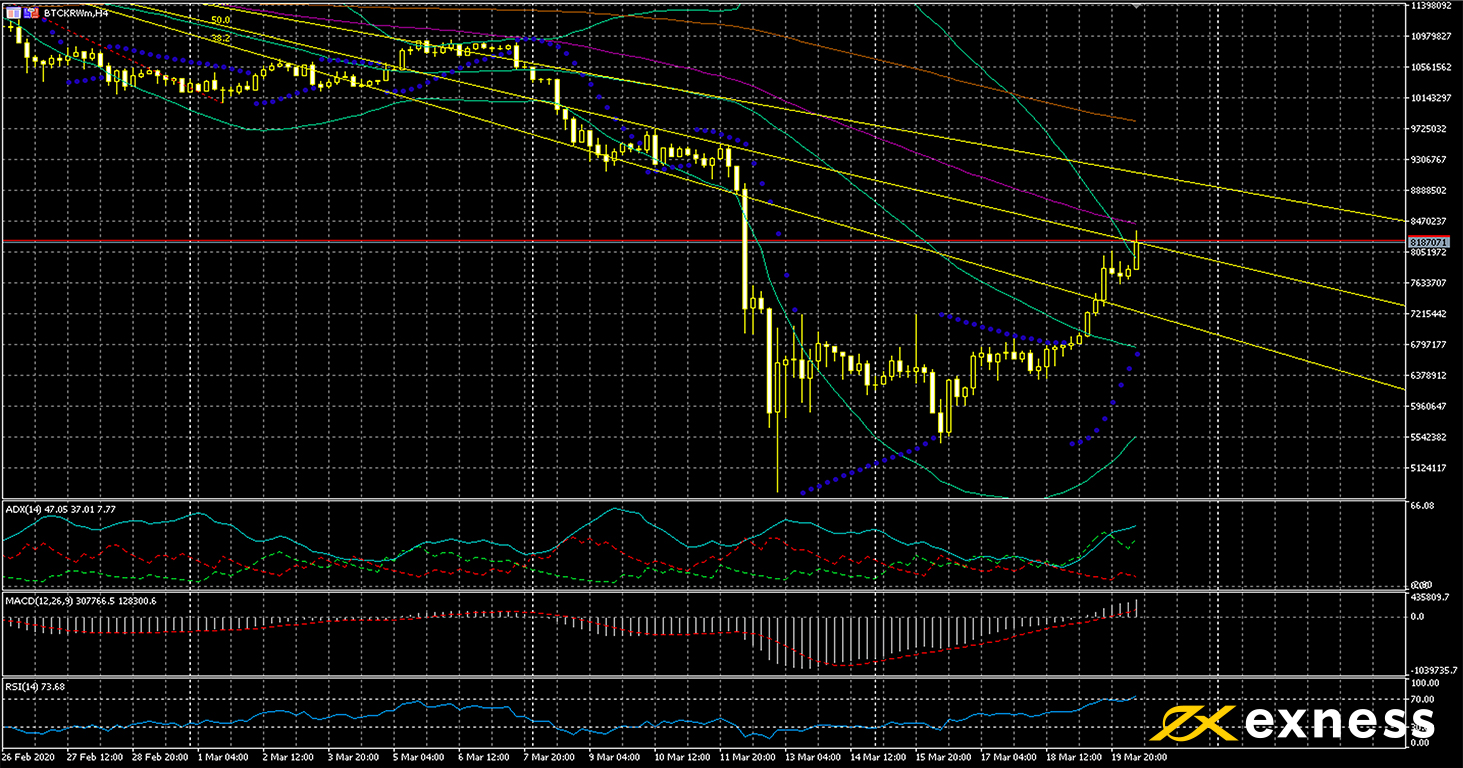 Click on the image to magnify. Crypto enthusiasts would argue that this is the time for bitcoin to start making big gains again, and maybe they’re right. Confidence in the ability of central banks and politicians to deal with this financial crisis is generally low, with interest rates already close to zero in many countries and quantitative easing seemingly at its limits. The question is whether many retail traders (or investors) will take the risk of buying bitcoin during such generally uncertain times.

The huge drop on Thursday of last week was followed by an initially weak response, moving price away from lows around ₩5.2 million. An upward movement seems to be gaining steam on this timeframe, but it’s probably too early to start looking for a new trend.

Bitcoin is now down around 60% from its highs in the middle of last month. This isn’t to say that it couldn’t lose another 60% from where it currently is, but such a situation appears to be unlikely.

The first key hurdle for buyers is the current area of the 50% Fibonacci fan and the 100 SMA. A close above this in the next few periods might lead to a period of consolidation in the ‘value area’ between the 100 and 200 SMAs. ADX at 47 indicates a strong upward trend, but buying in here would be very risky because overbought is suggested by both Bands and RSI.

Thank you for reading Exness Education’s weekly technical roundup! Check back next week for our weekly data preview on Monday plus more analysis of the most active symbols throughout the week.